4th July: A Bad Week In The Office For TERF's, the Binary's & J K Rowling

Society responds to the TERF's 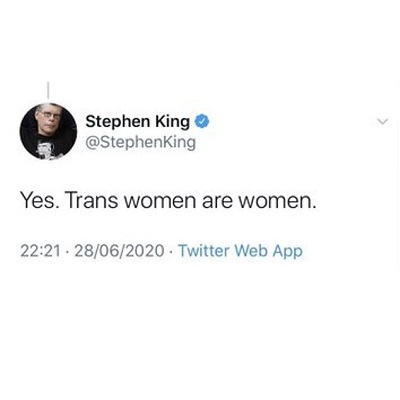 It has been a bad week in the office for the TERF’s, binary thinkers and J K Rowling in particular.

Two of JKR’s leading fan sites have disowned her transphobic comments and in a joint said: “marginalised people [were] out of step with the message of acceptance and empowerment we find in her books.”

The statement went on: “it is difficult to speak out against someone whose work we have so long admired (but it would be) wrong not to distance themselves from Rowling's harmful and disproven beliefs about what it means to be a transgender person.”

JKR’s week had already started badly, with the world-famous author Stephen King calling out in support of trans rights. JKR’s response was to delete a tweet supporting his amazing literary works.

Also, from the literary world, Damain Barr apologised to the trans community for past language. It is such a shame that JKR does not do the same and get involved with trans folk (whom she fails to understand) before hurting us with her horrible rhetoric.

And another team from sport has followed on from Burnley’s Football Club statement concerning discrimination and diversity. And this time it is perhaps the biggest team in sport Formula One’s Mercedes F1.

Mercedes F1 team principal Toto Wolff said: "Racism and discrimination have no place in our society, our sport or our team: this is a core belief at Mercedes.

But having the right beliefs and the right mindset isn't enough if we remain silent.

We wish to use our voice and our global platform to speak up for respect and equality, and the Silver Arrow will race in black for the entire 2020 season to show our commitment to greater diversity within our team and our sport”.

Not to be outdone, two religious leaders have called out in support of trans folk. Pink News reported this:-

Bishop Bayes and Rabbi Janner-Klausner said: “We have noted with sadness the increasing use of the term ‘transgender ideology’.

“As faith leaders, we believe that trans people, like every other person, have every right to be cherished, and protected by society and in the gender in which they choose to live.

Our faith compels us to speak up for those on the margins, those whom others would seek to silence or misrepresent.

We believe that the time is long overdue for a softening of the rhetoric in this area of our common life, so that trans people may indeed be seen as people, people who long to live their lives without prejudice or fear.

The world is far richer for their contribution, and they are, and should be treated as, treasured members of our society".

While we most certainly have not won the hearts and minds of everyone, in years to come, I am sure trans-exclusionary will be viewed by society in similar ways to how we currently view slave traders in previous centuries.

Black lives matter. Black trans lives matter. All lives matter - there is no place for discrimination in our society on the basis of colour, gender, sex, sexual orientation, religion or indeed anything else.

We are all equal.