30th September. A Woman's Right to Choose - Except of Course Trans Women

Trans folks do not have the same rights as cis people. 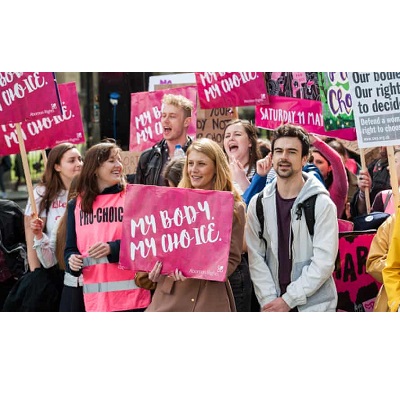 "A woman's right to choose".

The pro-abortion slogan that I and many others of my generation remember so well. It was a hot topic in the UK at the time. And still is, in many Catholic countries across the globe - even in 2020. "Pro-life" is the opponent's response and it was a view that I shared at that time - not for others - but within my own family - in fact, for my very own daughter.

Sarah was to be our third child, and my wife at the time (Lin) did not want another one. Sarah was an "accident."

We had two sons and a seven-year gap between our youngest son, and Sarah was in Lins opinion too long. She did not want pregnancy either - Lin was vain, and her fabulous figure (and clothes to match) was another reason why Sarah was nearly aborted.  Eventually, between my dad and myself, we talked Lin round to carry Sarah, but from the moment she was born, Lin rejected Sarah even to the point of one day throwing her across the room. Fortunately, I caught her, and she suffered no injury. I then "mothered" Sarah for around two years before Lin finally came round to love Sarah as any mother should.

But my personal experiences with near abortion is not the point of this blog - nor is the subject of anyone else's dilemma of having an abortion. For it IS the right of every woman to choose an abortion. For only they know their personal circumstances (which I fully recognise can be very difficult) and have to live with possible guilt in future years.

It can be - I am sure - a very tough decision, and if a mum goes to the route of abortion, she MUST be supported.

So what is the point of this blog you may well say?

It is the point of a woman being able to choose.

Because trans women (or men) can not choose.

If you have read my story, you will be aware of the near five-year fight I had, to have what is relatively minor surgery - an orchidectomy - castration - to be made a eunuch.

An orchidectomy was not affecting anyone else's life except mine.

I was 67 when I finally got "permission" to have an"orchie." I had prostate issues, and my dad had died of prostate cancer increasing my risk of passing with the same disease - but it did not matter one jot that an orchie would be of medical benefit to me.

I was a trans - and to have an orchie I had to "pass" lots of psychiatric tests - society said so.

And thanks to the Gender Critical (aka "Terfs") - trans people cant decide their gender either - not without having to go through a humiliating process through the courts.

And even then we dont get to know who decides our application or have right of a formal appeal. Very recently our wonderful government said they would tweak the process a little - but the fundamentals are exactly the same as fifteen years ago.

The right to self-ID

Cis women have the fundamental right to self-determine life - this is a big deal - we are talking about taking a life here.

What a sad, sad country I, and other trans women, live in.