11th January. Guest Blog by What The Trans 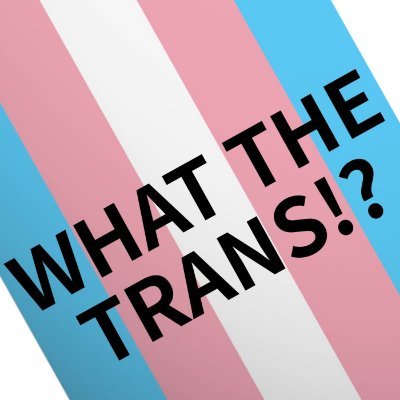 I believe that we have the means today to improve transgender and non-binary people’s lives within our community. I think we have the power to meet our attackers and beat them. I do not believe this will result in Gender Recognition Act reform, non-binary recognition, healthcare reform, the reversal of the Bell Vs Tavistock decision or anything else overnight.

But a simple truth has been forgotten.

It is replaced with a lie that we have been telling ourselves for as long as I can remember. The lie that we are powerless outgunned and entirely at the mercy of transphobic cisgender people otherwise known as 'terfs' or 'gender-critical'.

I know why it feels that way. For years I believed it myself. If you look at where our attacks are coming from and how massive the barriers are in front of us - it is very intimidating. This, combined with how isolated so many of us are (and were even before this pandemic) - feeling powerless is only natural. Perhaps it almost feels beyond debate. We all have examples of our powerlessness.

But the truth is we are powerful.

We have so many barriers in the way of realising it. Not power as in “your life force is powerful” or anything like that. Real power. I believe that the UK trans community right now has all the energy it needs inside the community to turn the tide of the last five years.

The Office for National Statistics estimates that there are somewhere between 300,000 and 500,000 transgender people in the UK. I would bet what little money I have on that number is low. But look at those numbers. Now, look at yourself. What skills have you picked up throughout your lifetime? What knowledge do you have that many others around you don’t? Look through your contacts, do you know anyone in any position of power? Do you have time you could spare? Do you have access to resources through your job or your family? I would bet that every trans person and our allies reading this will have something they could give to a united fightback.

Now times that by 300,000, 400,000 or more. Now add in the truth that we have every kind of person you can imagine in our community. Now imagine if all of those people were given access to skills development, a means to communicate - were given a real infrastructure for organising.

Imagine what could be possible if we could link up all of these people. If we had a dedicated private communications network where we could exchange information, resources, and co-ordinate a response. Imagine if we stopped operating as we do now, several thousand different communities operating autonomously and we came together and formed a real power block?

Imagine what we could do if those with experience in publishing taught others what they know. We could inundate every editor at any outlet with our stories. We could even start our own outlet if we wanted to (hell, me and a friend did and all we had was a second-hand iPad and a dropbox account).

I see no reason why our community if we worked hard on building alliances, connections and if we just talked to each other, we could have one million people marching for trans rights in London by 2022. That would equal the UK’s biggest protest of all time.

We could make that happen with what we have available to us right now. We don’t need any cisgender person’s permission to find an old PC and convert it into a private, secured chat server. Some of you will have the means to do that right now just with random bits strewn around your house!

I do not know what specific tactics we should use as a united block. I don’t even want to put forward what I think we should be explicitly campaigning on. That isn’t my place. Many more people than me must decide that. But I am saying that we could become a force to be reckoned with. We can unite and work together.

Why haven’t we done this before?

I am genuinely asking, why does this feel impossible or totally pointless?

There have been so many movements in history that started in a much worse position than we are in now and changed everything!

In the US, the Civil Rights movement was started by people who couldn’t vote, were totally segregated from society and were actively hunted by mobs who sought to kill them! The US Gay liberation movement was started by a bunch of LGBT people in someones flat one day! Stonewall was founded around a kitchen table by twenty people! Do you want to know how I know how Stonewall started? Because I asked one of them!

You can do that yourself right now on Twitter. There is walking talking evidence out there that shows we could do the same anytime we liked. Look what they achieved and none of them even had the internet! The original Stonewall were doing their work in the middle of a plague under Margaret Thatcher! The idea that we could not do the same does not add up.

A modern example of this is how the various communities that make up the wider US transgender community have succeeded in so many US States. They have an entire network that turned them into a force to be reckoned with. How do you think Sarah McBride made it as a senator? In the US right now, the transgender community has the ear of the president-elect. During the Trump years, the network they have was part of why a conservative majority supreme court awarded LGBT people full legal employment protections. That happened only months ago!

I have been told many times by American transgender people who live in red states, under Donald Trump, that they would not come to the UK because they would fear for their safety. Their networks are that effective. Of course, the US community has huge issues (the murder rate of Black trans women cannot be ignored or brushed over) and is far from perfect in so many ways but look at what they have achieved.

I believe we are just as capable as them! And I think there is no reason we could not do the same whilst avoiding some of the mistakes they have made.

Some of us have far more privilege than others. Once again, I have learned that whilst trying to get peoples opinions on where our community must go now. But if we became one unified community who talked to each other, worked together and made sure NOBODY is left behind, we could become a real force to be reckoned with.

The truth of all of us is we are not just transgender. Some of us are disabled, some of us come from travelling communities, we have every race represented. Imagine how much good we could do if we were able to be called upon as a block?

What could we do for those of us who have intersectional identities? Or what we could do for other movements fighting for justice?

We could not only help ourselves - but we could help others in the form of marching alongside Black Lives Matter, Sex Workers Rights groups, Intersex groups. The possibilities we would have for doing good in the world would increase so much if we just had a way to talk to each other and organise as one block.

There will be people who don’t see the point. Or they will be scared of how the Terfs and gender-crits would use whatever actions we take as another stick to beat us with. Some may think we should carry on as we have whilst hate crime rates rise, and transphobia becomes more acceptable. But look at what they have been able to do for the last five years, they do not need any reason to tell everyone we are dangerous or that our needs are abusive.

Our attackers will attack us whatever we do. We may as well get attacked doing something instead of waiting for Stonewall to save us. How many of us will suffer in the meantime? We could mitigate that suffering as soon as next year!

I am not saying what has happened is the result of us not taking action. We were all blindsided by how much things turned dark. Nobody could have predicted what has happened. Nor do I want to suggest that good work has not been done. I have seen and reported on much of it. I am well aware of the fantastic work, so many of us do.

But non the less these people do their work in relative isolation. With some support from the whole community, there is nothing they or we couldn’t do.

Currently, many across the world are looking at the UK and highlighting us as a positive example. Many transgender people are scared that similar rollbacks and attacks could be coming for them next. We have to start realising how much power we have at our disposal, and using it, not just for our sake but for theirs.

There are some reasons why not to act. What if something goes wrong? What if it makes it worse? Those points are worth discussing. Whatever we do, we will have to be careful, and mistakes will be made.

But we cannot be frozen by the idea that we do not have power! It is a lie that serves our attackers far more than it serves us. They don’t want us to act. They want us gone.

For our sakes, for the sakes of others who could use our help and for the sakes of those in other countries who are scared they will be next, we have to realise how much power we do have and use it.

Otherwise, well, look at the negatives that have happened over the past five years and try to imagine where we will be five years from now.