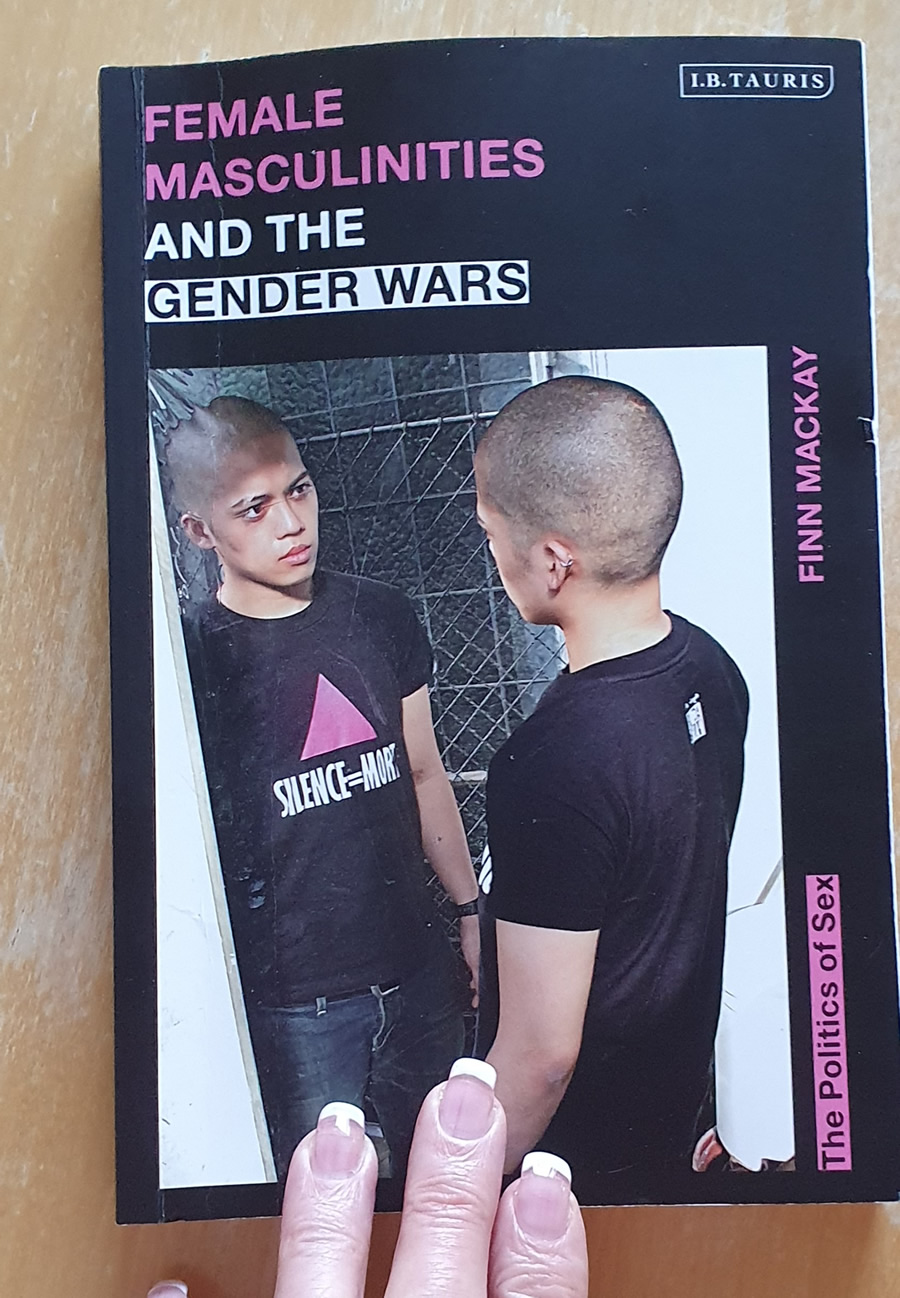 "The gender wars are not an item on a Gender Studies reading list; they are real battles and real casualties".

Words from 'Female Masculinities and the Gender Wars' - a new book authored by Finn Mackay - a senior lecturer in sociology at the University of the West of England - and who, like myself, is a Radical Feminist.

To those who have never heard of Stonewall (no, they are not builders, they are an LGBT+ charity) to understanding the acronym TERF (Trans Exclusionary Radical Feminist) - Finn Mackay's words may seem quite extraordinary. Also involved in the gender war are the Gender-Critical (GC) - not necessarily feminists but firm believers in biological binary sex and also trans exclusionists.

But sadly, this war is real - not fought with guns or knives but with intense lobbying of government officials, civil servants, writers, journalists, and the media - together with individual hand to hand combat via social media and, in particular, Twitter.

At stake, perhaps over decades, are LGBT+ rights, particularly transgender rights and potentially even women's rights, to abortion and bodily autonomy.

Being involved in the gender war myself, how could I resist not asking Finn for an interview?

But not before I read Female Masculinities and the Gender Wars, and yes, on occasion skipping back over some pages to ensure that I understood the book's message.

And here I foresee one potential problem with Finn's book - it doesn't take sides in 'the war' - meaning the reading audience could be relatively small.

It's not a 'call to arms' like that of the recent books from Helen Joyce or Kathleen Stock - nor indeed like that from Shon Faye 'selling' the message of trans acceptance. Finn's book is slap bang in the middle of a 'compulsory pick a side war' - preaching tolerance and understanding from TERF's, GC's and Trans Rights Activists (TRA's) alike.

So early one Monday morning, I Zoomed with the author but not before watching two awe-inspiring videos with Finn Mackay (pronouns they/them) in full flow, one filmed at TEDx Covent Garden and another at Oxford Union.

My first question was, of course, why write the book?

Finn had explained some of the reasons in a Guardian article last October, but digging deeper, they said, "I don’t like seeing feminism being used to bash minority groups."

But other reasons prevail - Finn can foresee the dangers of imported right-wing, often "Christian" conservatism, saying in the book's introduction: 'Whatever we call it, it is growing across Europe and North America. This threat is fascist, and it's masculinist nationalism. The enemy is anti-choice, pro-natalism. White supremacist forces that are seeking to build their own version of Margaret Atwood's nightmarish vision of Gilead, in fact, rather than fiction, across Europe, the United States and other parts of the world. They must not succeed'.

And sadly, feminism, if not being destroyed, is again tearing itself apart over a few trans folks (primarily trans women) whose identities don't fit with their born sex.

Finn attempts to unify the two warring sides with a distinct, prominent warning of 'unite or suffer'.

Reading the book, I was intrigued to discover that Finn invariably identified as a boy in childhood, rejecting femininity and embracing masculinity.  As an adult, they later considered transition but decided to settle with a “queer/trans butch or transmasc identity".

What are your opinions on Janice Raymond? I asked (Raymond is considered by many as the mother of TERFism), "In some respects hateful and disgusting", said Finn. And Margaret Thatcher? "Awful - damaged the country, and we are still seeing some of the effects of her government". And the Women’s Declaration of Human Rights? (a TERF/GC document that many TRA's see as an attempt to extinguish our very existence) "Muddled. I disagree with all of that and would never sign it", replied Finn.

But what of the contents of Finn's book?

Well, it reflects on how and where the war started back into the 1970s with the involvement of the Catholic Church and why it suddenly escalated in the UK after Theresa May's statement in 2015, that society should be "kinder to trans people". Once considered a TERF herself, May did a 180-degree turn once discovering the truth about the beleaguered trans community.

I must say, I found page after page very informative, brilliantly researched and often backed up by Finn's own life experiences. My notebook was rapidly filling with 'must mention this' or 'don’t forget that' - knowing that writing a book review can be a bit of a task. One note read, "Plain easy to read language, well written, goes into great depth, unique - loving it"!

Another note read, "This book has kicked me off to wanting to read again."

Indeed, now writing this book review to ensure I keep it a ten-minute read, I have to ignore some of my very own notes!

A passage on page thirty was one that I specifically must mention; it reads: "It is interesting that our cultural understanding of sex as a male or sex of a female is so dependent on genitalia because in our culture we wear clothes that hide our genitalia".

Just one page later, Finn quotes Monique Wittig (a French author, philosopher and feminist theorist) saying: "For there is no sex. There is but a sex that is oppressed and a sex that oppresses. It is the oppression that creates sex and not the contrary". As a Radical Feminist, I obviously lapped up every word.

The theme of 'sex' continues discussing biological sex - sex as a spectrum - sex that matters - sex rank and obviously male violence against women. The book questions both the definition of a man, woman and even feminism itself.

In explaining the history of the war, specifically in the UK, Finn explains, the divisions in the late 70s.

Clearly, like now that was a difficult time for trans women, with one Rad Fem exclusionist saying, "these beings represented the male caricature of me, and I did not feel sorry or sisterly, I felt undermined and hostile."

In response, a cis woman trans ally said, "I am a woman, not because of my body, but because I define myself as one". The TERF movement of the 1970s drew very heavily on Raymond's vision of trans women, and Finn exposes the hate and bigotry at that time exceptionally well.

I was delighted that Finn devoted a whole chapter to the Michigan Womyn's Music Festival - a historical event in the gender war. The book really came alive at this point, and from the passionate writing, Finn loved writing about it too. I had read about this extraordinary event when reading 'Whipping Girl' by Julia Serano - a book now considered a classic in gender studies in the United States.

Finn must be one of just a handful of British women to go to the festival, and during our chat, it became clear that they looked back at it with a sense of raw female achievement. "Women did everything", Finn said, "from putting up tents to doing the electrics and sanitation to having a creche - women made a city". Finn details the trans women's expulsion from the festival made by just a handful of committee members - with many attendees unaware that trans women were being thrown out.

One of the common insults thrown at trans women and mooted at the festival is that trans women benefited from male privilege. As a previous sufferer from gender dysphoria, which many describe as desperation, wrongness, sadness, fear, jealousy, and drowning, I can only retort that is one 'privilege' I could have done without!

Finn quotes text from Jan Osborn, a Radical Feminist Dyke and organiser of the festival, saying:

"We ALL have privilege in some areas and are oppressed in others. Okay, so some trans women spent time trying to live as men before they transitioned, and maybe they benefited from male privilege, but that isn't any reason to discriminate against trans women. It's just another way that we have to be conscious about the privilege we might have. I mean, I'm white, and that means I have to be conscious of that privilege.

In response to the ejection, Camp Trans was built immediately adjacent to the women's site. Don’t know the ending of this historic event? Please read the book and dare I say, we should all learn the moral from this story.

The book stayed very much alive in the following chapter describing the politics and ideologies of the TERF's/Gender Critical. The depth of detail was exceptional. It was all the better for the slant to British GC’s like Sheila Jeffreys and Stock, referencing events, papers, issues and newspaper reports that originated from the UK. The chapter conclusion (page 114) was compelling - though being a Serano fan; I believe that gender is biological, not a social construct. Finn takes a different view, but hey, when did feminists agree on everything?

But then on chapters five and six.

These chapters focus heavily on masculinity. Indeed, Chapter five is titled "Butch/ering the real man". Now me being a trans woman - well, I don’t do masculinity very well. I look at the male clothes still in the house (I must give them to some trans man or butch lesbian one day) and can't abide to touch them. So, whilst I did read every page, on a personal level I found it very hard going. To be clear this is not due to Finn's writing, and yes, I did take notes. Fortunately, because of my self-imposed book review length of around 2000 words, I have a great excuse not to type them up!

However, these pages are invaluable for butch lesbians, trans men, students doing gender studies at unis and neutrals interested in masculinity.

Come chapter seven - I was "manning up" - the book came alive again, for one sound reason. Before writing the book, Finn took the time to survey some two hundred butch lesbians for opinions.

And actually, I found their responses very interesting. I was occasionally seeing either indirect or direct opposite versions of me. Women embracing masculinity in their lives while me a male born individual, clutching hold of femininity like my life depends on it.

"Many respondents pointed out that although they may identify as masculine, they did not identify as a man and did not like much what they saw in most men, or in most examples of manhood or masculinity." Finn continues on the next page, "My motivation for writing this book is to keep highlighting that boundaries are not clean and clear, identities not only shift and change but they also overlap and may inhabit several labels at once"

I could relate to that, and for trans women, I want to mention these powerful snippets from respondents which I feel we can all relate to.

One replied, "If I ever wear women's clothing, I feel like a total fraud and could cry at how bad that makes me feel".

Another wrote, "I work out in the gym and look male enough that I regularly get hassled in female toilets.

Another respondent wrote, "I feel a kinship with other women (including trans women)".

What really hit home from reading 'Female Masculinities and the Gender Wars' was that we are all different.

Differences that go beyond biology - or even our understanding of humanity.

Could I write more - yes, I could, but my 2000 words/ten minutes is undoubtedly up. But I would like to leave you with one of Finn's messages for those involved in the war.

This war is real, but we all have the right to live in peace, and in reality, we should be fighting together to defeat patriarchy. Single-sex spaces, such as in refuges, should be respected - we all need safe spaces sometimes.

Do read Female Masculinities and the Gender Wars, but if you are a trans woman, be prepared to get brave for a couple of chapters. Butch lesbians and trans men - you have a bible.