Book Review: Man Enough To Be A Woman by Jayne County 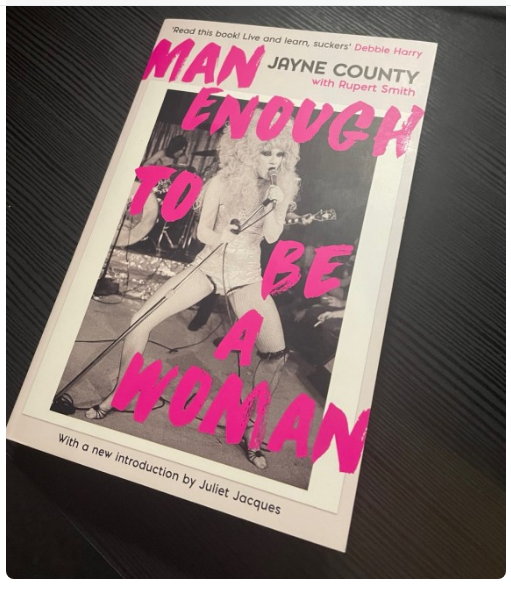 Jayne County, for those who don't know, is probably best described as a one (trans) woman rock phenomenon. Jayne was a trailblazer in the truest sense of the word. An authentic and uncompromising force of nature, she has lived through all the big cultural moments of popular culture and survived more than most people could bare and is still living and breathing, kicking and screaming, to tell the tale

Man Enough To Be A Woman was first published in 1995 and with a reprint in 2021 it sees no sign of relenting in its reach.

For anyone with a deep or passing interest in counter-culture rebellion or rock n roll mythologies, this book has them all in a roller coaster that leaves you panting for breath. This is a story of success, excess, spectacular failure and car crash catharsis.

I first read this book when l was all but 17. I heard an interview on the radio and l was immediately drawn to her voice and turned the radio up. Her words made sense to me like I was hearing a voice on a spectral plane that l knew was going to give me some sort of spiritual energy. I remember reading the book cover to cover in about 3 days and l absorbed every word of it like it was being shot into my brain by intravenous drip.

The story starts with her growing up in Dallas, Georgia and her very young realisation that she was defiantly not ever going to conform to any of the norms of the time and place.

She speaks of the casual racism and common homophobia that she needed to escape from - and her love of British Rock 'n Roll, which was coming through the radio at the time. It seems this gave her the rocket fuel energy to leave her backwater and seek out what she calls 'freaks of all kinds'.

The book covers the late 60s hippy period and while Jaynes original plan was to get to San Francisco she didn't quite make it due to a series of logistical disasters but ends up, perhaps more fortunately stuck in New York City with no friends, no map and no dollars. Jayne then spends most of the Summer of Love in The Stonewall Inn listening to The Doors and plotting her next move. While NASA was planning its mission to the Moon, Jayne was engineering a journey into a cosmos of her own.

Jayne was in the thick of the Stonewall Riots of 1969, screaming ''Gay Power'' down Christopher Street and fighting the homophobic police.

Jayne remarks that the protest, which has now gone down in history as a turning point in gay liberation wasn't a one-off event.

It was a culmination of a series of fight-backs against the ultra-conservative culture of the time, when gay bars were raided and the police carried out 'gender checks' on trans women or drag-queens.

The queens were at the front line because they were visible and conservative gay men at the time looked down on the more flamboyant protesters with some even seeing them as an embarrassment to their cause. Sound Familiar? There is still plenty to fight for.

Jayne's next big cultural moment starts with her joining theatre companies in NYC which indulged in completely free form, deliberately shocking and knowingly ridiculous shows. These attract the attention of Andy Warhol who already has an interest in casting drag queens and all manner of waifs and strays who he exploited but who are also willing to ride his wave of art and madness for a few dollars and a crack at fame.

All the Queens from Lou Reed's song, Walk On The Wild Side are mentioned in Jaynes story. All the legends of queer folklore are here. It really is a who's who of everyone or everything which would become 'cool' in the coming decades.

Jayne's music career really got going in the mid-70s while hanging out at the, now legendary Max's Kansas City in NYC . Marc Bolan used to drink there and Debbie Harry served the cocktails. The Max's Kansas City album from 1976 is a real snapshot of the time when garage rock was just about to become Punk and become the defining cultural moment of the 70s.

Well worth checking out!

Jayne returns to London in the later 70's where her music career really begins to take off. The Punk world of the time rejected gender stereotypes and in my view, Punk was as much an art movement as any kind of musical force. It really was a time when women came to the front with real jarring sexual politics on display, and in my opinion, there is a direct line from The Slits to Tracey Emin. Jayne is definitely part of this story, not just by being the first transgender rock star but by writing such songs as If You Don't Want To Fuck Me, Fuck Off'.

For these reasons, Jayne's mainstream success was never forth-coming but her legend is sealed now as someone who was always uniquely herself and has lived many lives. From Stonewall gay liberation to Andy Warhol's Factory, her relentless screaming through British Punk and on to Berlin in the 80s. Jayne even managed to find time to fit in an appearance in Derek Jarman's, Jubilee. Her legacy is yet to be assessed properly and is often overlooked.

The 2021 reprint of this features an updated chapter that tells of her retirement and a new career as a painter. I own a couple of her works. They are my most treasured possessions. If Jaynes story teaches us anything it is that resilience and fearlessness really are the driving forces of our lives. Jayne certainly helped me become myself, and for that l will always love her.

Man Enough To Be A Woman