Feminism and the fight for transgender futures. 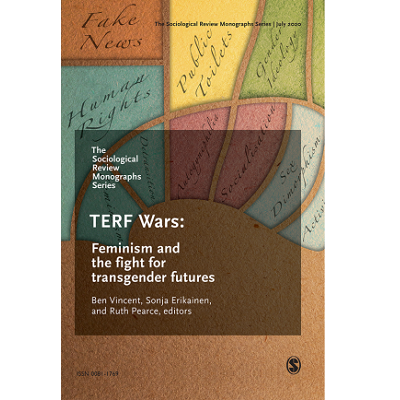 Without question, reviewing TERF Wars has been a massive challenge for me. A series of eleven articles written by esteemed academics - and me who has only recently popped my head over the TERF war battlements. With no formal writing experience and never near to being able to go to University, I feel like a school kid reporting on Liverpool v Everton for the Liverpool Echo but here goes; TERF Wars is an essential book - debunking the trope that the trans community hear day in - day out.

Now an immediate word of caution, the writing style of each contributor to TERF Wars is different. As each reader may well have varying interests, TERF Wars may well be a book that readers may want to 'dip in and out of' rather than reading it from cover to cover. Nevertheless, it is an invaluable read for journalists, researchers, sociology students and indeed anyone interested (or, like me a trans woman involved) in the TERF war.

Contributors include my all explaining guru - Julia Serrano, together with Sally Hines and Cristan Williams, to name just three. Edited by Ruth Pearce (University of Leeds), Sonja Erikainen (University of Edinburg) & Ben Vincent (Open University), the team reads like an all-star cast of gender specialist heavyweights from across the globe.

In the introduction, the editors suggest that TERF’s are predominantly white, middle to upper-class women against anything 'impure'. From my experiences of engaging with TERF’s on Twitter, I would certainly concur with that view. They also believe in the binary, without the ability (as some do claim) to accept or understand the word 'gender'.

One of my favourite articles, and indeed the first in the book, is by Sally Hines (University of Sheffield). Entitled "Sex Wars and (trans) gender panics: Identity and body politics in contemporary UK feminism." The article touches on issues like GRA reform, sexology, gender, deception, diversity and, of course, feminism.

Sally makes an excellent case for Self-ID and, in particular, brings home to the reader the past actions of Woman's Place UK (WPUK). She writes, "WPUK and affiliate organisations have organised meetings across the UK at which speakers have directly positioned Trans women as a potential threat to 'women'. A key rhetorical tactic here is the intentional misgendering of Trans women. At one meeting, for example, a speaker presentation consisted of slides of photographs of UK trans women whose appearances were mocked as they were talked of with male pronouns."

In another passage, Sally highlights the work of Fausto-Sterling, mooting that sex is a spectrum and arguing that there are potentially five different sexes, possibly more (p.35). Many biologists would not agree off course. If there is one page in this book that is ‘the star’, I would suggest page thirty-five is indeed it.

I found the whole article from Sally riveting. It dug down into TERF 'feminism' (which was primarily engineered by partisan academics), deconstructing it limb by limb. This very clearly demonstrated how feminist goals have changed, along with society's views on gender.

The second article, from Cristan Williams (Transgender Archive USA), is incredibly powerful too. Initially bringing into play the words of Ruth Herschberger, which conveniently re-enforces my personal opinion that (in the broader sense), sex is a spectrum, even though that was certainly not her intent. The article echoes the editor's views that TERFs see Trans women as 'impure.'

The words of Janice Raymond (a feminist from the late 70s onwards) are quoted frequently in many articles. Cristan quotes this little beauty "I contend that the problem of transsexualism would best be served by morally mandating it out of existence."

Raymond also said, "Rape, of course, is a masculinist violation of bodily integrity. All transsexuals rape women's bodies by reducing the real female form to an artefact, appropriating this body for themselves."

Turning away from Raymond for a short spell, Cristan goes on to explain the history of the TERF wars. The campaigning of Beth Elliot, a Trans woman in the USA. She was an activist aiming to achieve acceptance of lesbians into feminism and then was forced out by the very people she was trying to help via death threats... not to mention the use of knives and guns!

Cristan also quotes from Zaker-Shahrak et al., saying "we must concede that the medical system that Raymond helped to pioneer resulted in many unnecessary deaths." This, of course, is a matter of opinion and discussion, but my mind is already made up.

Another passage from Cristan's article, which hit home to me, read "How much easier it is to attack people close to you than focus on patriarchy" meaning. Of course, all the time the TERF war is active, patriarchy escapes proper attention.

After reading the first three articles, I was left reeling.

I concluded from my reading that Janice Raymond is primarily responsible for the TERF war.

In my notebook, I wrote, "I find her a reprehensible human being of the lowest order, her bile is toxic - this war will never stop all the time TERFs believe solely in the binary or accept any of her thoughts."

As the book moves on, I loved each article for varying reasons, but the name Raymond invariably popped up as often as the word penis repeats on Twitter from the TERF franchisees.

The one article I was desperate to read was from Julia Serano, the author of "Whipping Girl."

It is a book that changed me as a person, offering explanations for being Trans life like no other. In some respects, I was left a tad disappointed, not because of Julia's writing but because of the subject matter - Autogynephilia. This is more a personal issue for me because, in my own life (having had bottom surgery), sexual fantasies and eroticism mean nothing. In my notebook, I wrote, "I find sex boring, dresses are much more fun!" I appreciate, however, that many will not agree with my note!

It is not that I don’t know Autogynephilia exists because my first wife ran a Dressing Agency (a place where men could cross-dress) for several years. Her experiences of dealing with various clients were undoubtedly varied, but most clients were looking for a coffee and a chat, some going on to be Trans. Others, though remained as cross-dressers, and occasionally the odd one would dress for the stimulus of sexual gratification.

As Julia wrote from her own experiences in “Whipping Girl”, cross-dressing is a route that some discover they are Trans. What I love about Julia's writing is the detail. Yes, she loves to invent or use rarely used words, often leaving a non-academic reaching for a dictionary (or her website where she has a glossary of terms) Link: http://www.juliaserano.com/terminology.html

However, no one can accuse Julia of ever falling short in making a convincing case.

As the articles in TERF Wars move forward, the various contributors subject matter includes rapid-onset gender dysphoria, de-transition, sex work (in particular migrants from Brazil), not to forget the editors own contribution covering COVID-19 and how it affects Trans folk.

I want to skip back to two articles that resonate with me quite personally. Firstly, the article by Charlotte Jones and Jen Slater (Universities of Exeter & Sheffield Hallam). Entitled "The toilet debate: Stalling Trans possibilities and defending women's protected spaces." Sadly, this is an issue that is not going to go away. I have very fixed views on this subject matter, to the point that I never made one entry in my notebook!

For me going to the loo is a fundamental human right; we share loos all the time.

The issue of Trans women using the Ladies is a non-issue. The same, of course applies to Trans men going to the Gents. That said, I do feel there are times when single-sex/private places are appropriate for us all, men, women, Trans, gay etc. I am not so sure it is a subject that any writer can validate or otherwise, for each potential scenario, each individual case is profoundly personal and unique.

The second article that I want to comment on is that concerning a TV interview of Chimamanda Ngozi Adichie in which she said: "Trans women are Trans women." These words fly in the face of the often-repeated claim "Trans women are women."

This is a very contentious debate with links to JKR's tweet that "Sex is Real". It resonates with the writing of Juno Roche (Trans Power) declaring (after having SRS) that they are no longer a woman but "trans." Adichie took quite a backlash from her statement but as far as I am aware, Juno has not suffered in the same way, we accept the term that someone is "Trans."

Many people often write a hundred words describing the meaning of gender - I do it in just nine. Gender is your personal belief of your rightful sex. I certainly believe in my mind that I am a woman; that woman is my rightful sex.

I have more of a problem when replying to the question, 'What sex are you? 'This is because I know I am not a 'natal female' but part of a spectrum or disabled from being my rightful sex. This argument is repeated numerous times in many articles, including of course page 35. Just how many per cent of a ‘woman’ I am, I don’t know - my genitalia was certainly wrong, but I also have "feminine bits" like neck, legs, throat and feet caused assumably by phenotypes.

So, in all good conscience, I can't claim my sex is a woman. I am happy with a woman as a gender but not sex. I prefer the term "Trans.” but this opens another debate within the book. The urgent need for the third sex "opt-out" - to accommodate non-binary, intersex and potentially some, if not all, Trans as well. I mentioned earlier in this review the campaigning group WPUK. They have a banner on their website reading “Sex Not Gender.” and this is the crux of it because I would say “Gender Not Sex”- this then makes me a woman.

So, did Adichie deserve all the flack she got? In my view no, and I have a gut feeling that when the UK government recognises the third sex opt-out (as surely they must do at some point), some Trans folk will opt to be “Trans” - just like Juno Roche.

One other section of this article hit home to me. On page 151, Miss Sahhara is quoted as saying this:

"The way I look/dress and present myself as a human being is a choice, but the way I feel is not a choice. I did not choose to have the feelings I have. Who will choose to be hated, misunderstood and rejected? We all want to be loved, accepted and respected for who we are. Please don’t confuse my struggles as a choice".

These words could easily be coming from Julia Serano's mouth - and they really sum up being 'Trans.'

To conclude my review of TERF Wars let me say this: is it the most enjoyable book I have ever read? Well, no, it is not.

However, the folks I mentioned in my second paragraph of this review MUST read it.

There are no heroes - no 'quick fixes' offered to end the TERF war. But what it does in minuscule detail is explain the history, rhetoric and depth that academics have gone over many decades to either create or debunk issues concerning people - transgender people.

If I am honest, I find this very sad.

To use the beautiful words from the current Deputy Prime Minister of Belgium the amazing Petra De Sutter  - "being transgender is just part of me".

Thank you for reading my review - you can also find me on Twitter @PlaceSteph.

With thanks to The Sociological Review for their permission to quote from TERF Wars.