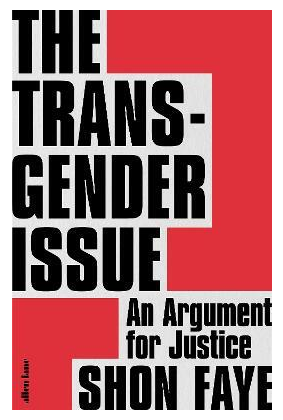 The“ Liberation of trans people would improve the lives of everyone in our society” these are the first words written by Shon Faye in her book ‘The Transgender Issue’, an attempt on her part to reset the trans ‘debate’ that has been raging in the UK media for the last several years.

Instead of focusing on cis people’s anxieties about transgender people she focuses on the actual hardships faced by trans people in Britain. Shon weaves hard data and case studies documenting the systematic discrimination experienced by trans people in the UK in education, work, prisons, social services and healthcare and how their lives are made unnecessarily harder as a result.

It is written in accessible language for cis people to read as it is largely pitched at them. It would be an excellent book to give to any cis friend to educate them about trans issues. In the book, Shon Faye argues that the issues that trans people really care about are often the same class issues that cisgender people face. Shon wrote this book in the hope it will bring trans people and the various labour and social movements that make up the left closer together as trans liberation cannot be achieved solely by trans people ourselves. We need allies.

Shon Faye holds political convictions I do not share and if there is one criticism I would level at the book is that with certain institutions Shon has earmarked for abolition little space is given as to how they could be reformed to make it better for trans people. For example, Shon will talk about the problems facing transgender prisoners and the difficulties housing them but then offers no prescription about how to manage them better other than an argument to incarcerate less and less until the prisons are emptied because one assumes (as an abolitionist) that she believes Britain having advanced up the ladder of socialist development to fully automated luxury communism crime will disappear because the social forces driving people to commit crime will have disappeared.

I think that even in a far more equal society where people's basic economic needs are taken care of crime (though much reduced) would still occur and there would still be a need to securely hold convicted criminals in isolation away from the wider community so how to deal with trans prisoners humanely in a cereal system still needs to be answered both in an environment of scarcity we find ourselves in today but also in an environment of abundance we hope will come about in the future following a socialist transformation.

Shon documents how trans people are currently failed by UK prisons but despite a fleeting reference to a trans only prison in Italy no investigation is made with how other countries deal with trans prisoners. Norway is a social-democratic country with a far safer and humane prison system than what exists in the UK. How do they deal with trans prisoners and does it work better? I would like to know.

Overall, however, I highly recommend this book. Whilst many of the issues Shon talks about in this book I am already deeply familiar with. What I, and I imagine many other activists, have always struggled with is being able to track down supporting data that we originally read on our social media feed a long time ago but can’t find it when we need to quote it. Shon’s book contains a wealth of relevant data about trans people in the UK, all of it well-referenced so that most of the information you need can be found in this one book alone.

If you only buy one trans book this year - make it this one.