How do I begin to review the book “Trans Power” from Juno Roche? 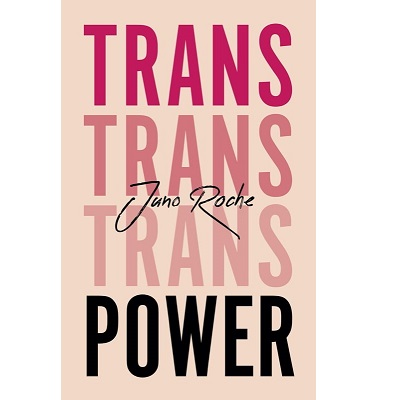 How do I begin to review the book “Trans Power” from Juno Roche?  Well, actually by reading the book and not looking at other people’s reviews. Book reviews are often so abstract with the word “raw” being a frequent favourite from reviewers.

I swore to God I would never use the word “raw” - but now take that promise back.

In places, Trans Power is not just raw; it is almost to the bone marrow and bounces from high to low like an elephant on a bungee rope.

I guess this is the fourth or fifth trans book I have read and reviewed. Blown away by Whipping Girl by Julia Serano I got hooked and never really expected another book to reach such self-imposed dizzy heights.

Did Trans Power from Juno Roche come close? Read on.

Firstly, let me give massive credit to Juno - where she has come from and got to.  I admire that a soul with HIV and working in the sex industry has become an established writer with such great skill of word.    Juno loves words, and the passion shines through in many sections of this book like a beaming light.

In total, I took six pages of notes while reading Trans Power, but when reading them back to myself, the high – low pattern became more evident.

And for me, the first chapter nearly did me in.

This is because I am probably an old fart.

Wanking and sex (as in intercourse) was once in my life - but as the years (and my Orchie) took effect, it drifted like a sunset over the horizon never to return.

And I don’t miss it.

Juno Roche will not believe that - so I will write it again.

My notes read “This chapter is a rant – and I am paying for it”, but I read on, and the value of the book then became more apparent.

The essence of the book revolves around eight interviews with trans folk, none of whom I have never heard off with one exception.

But this is not a surprise for I am a community virgin. A virgin at 68. Juno will not believe that either.

While I found some of the interviews out of my sphere of interest, I did find some gold nuggets as well.

Juno introduced me to Travis Alabanza and Glamrou – two drag queens who I quickly found on YouTube and nearly died laughing. Their observational comedy was hilarious, and I enjoyed learning about both of them and their performance on stage courtesy of YouTube.

Whilst from very different backgrounds their life stories were fascinating. The book had redeemed itself.

But better was to come.

Every day is a school day, and I look forward to school.

And so, appeared the interviews with Kate Bornstein & E J Scott.

Now I had heard of Kate Bornstein (I told you I am a virgin), but the wisdom and her unadulterated philosophy blew me away.

I recall being preached to once by the evangelist Billy Graham and melting (but not quite to the point of giving my life to Christianity), and Kate equalled that experience. If you are searching for answers in your trans journey, Kate Bornstein should be on your menu hit list.

Juno made it apparent she was in awe of Kate Bornstein, and I too am in awe.

The final interview in Trans Power has Juno interviewing E J Scott who established and curates “Museum of Transology” – something again I did not know existed.   And this interview was for me the cherry on the cake. I wrote in my notes “My sort of person – he has trans nailed. Page 229 was awesome.”

Another note read “After reading the comments from EJ Scott I am at peace with my gender” while another read “there are those shouting we are trans and others seeking normality.”

Looking back how true – I was seeking normality until Liz Truss changed my direction with her evidence to the Women’s & Equalities Select Committee on the 22nd of April 2020. I am now shouting.

E J argues to look at aspects of trans lives in circular, not linear ways – something I discovered for myself some time back and makes this very point elsewhere on my web site.

Bornstein & E J Scott made reading Trans Power by Juno Roche more than worthwhile and then as a little caveat Juno writes at her best in the conclusion chapter “Trans is Beautiful”.

I put the book down with an internal glow of satisfaction – the elephant on the bungee rope had stopped bouncing.

The elephant smiled, and I smiled back.