I dare any gender-critical radical feminist to read it and not be moved. 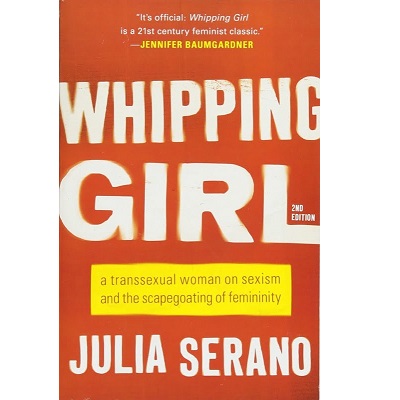 Whipping Girl by Julia Serano is without question the best book I have ever read, not because it is about gender but because of its unmatched take on human life behaviour.

Although it was the first book I read since my reading habit was reignited by lockdown during the coronavirus pandemic, I have left it to now, some two months later after I read it for the first time to do a review. To be frank, I do not think I entitled to review a book that is so far above the average person’s (in other words “my”) thinking.  In consequence, I read Whipping Girl twice just to be sure I understood as much of Julia's teachings as possible.

This book tears apart the norm and puts forward arguments that opened my eyes to life in such a way that I now feel (obviously) inadequate. I am not going to get hung up on this too much because I know my level, but if there was ever a book that every; and I mean every, 6th former should read it is this one.

Such has been the success of Whipping Girl in the USA it is now being adopted in school and colleges for dissection and debate; often as part of a syllabus.  And I can see why - in many ways, it should be a blueprint of life.

Julia comes across as a passivist. Yes, she has taken up arms against injustices, but she preaches peace and harmony and even moots working with your opponents for the greater good.

And the lesson here is perhaps both sides of the UK’s TERF wars should wise up and start working for the overriding feminist cause instead of arguing who pee’s where.

There are so many sections of this book that blew me away, for example, page 310:-

I am not trying to make the case here that MTF spectrum folks are “more oppressed” than cissexual women” as playing the more-oppressed-than-thou card serves no purpose other than narcissism. But I do hope to encourage cissexual women to take a moment to put themselves in our shoes, to consider how patronising and con-descending quips would sound if you had been forced against your will into boyhood.  As someone who spent my childhood desperately wishing I could be a girl rather than a boy, and as and adult, considers it a privilege to finally live in the world as a woman rather than a man.

MTF spectrum folks need feminism to make sense of our lives and to work toward ending our continuing marginalization. Unfortunately, many cissexual feminists seem to fear MTF spectrum inclusion within feminism might dilute, distract, or undercut a movement that has historically centered itself on the struggles and issues of cissexual women.  Typically, such fears arise from the assumption that we cant work together because we supposedly have different goals or we are unable to relate to one another’s experiences. I believe that is a red herring.

What truly unites feminists is not the shared history (as we each bring a unique set of life experiences to the table) but our shared commitment to fighting against the devaluation of femaleness and femininity in our society.

It is not just that MTF spectrum folks need feminism but that feminism needs to embrace MTF experiences and perspectives. The fact that the lions share of the anti-trans sentiment specifically targets those of us on the MTF spectrum indicates that we are marked, not for failing to conform to gender norms per se but because we “choose” to be female and or feminine.

Woman to lesbian friend:   So, what is it you find attractive about trans women?

Friend replies:  Well, it is almost always their eyes.

When I look into them, I see both endless strength and inconsolable sadness. I see someone who has overcome humiliation and abuses that would flatten the average person. I see a woman who was made to feel shame for her desires and yet had the courage to pursue them anyway.

I see a woman who was forced against her will into boyhood, who held on to a dream that everybody in her life, including the gender identity gatekeepers desperately tried to beat out of her.

I see a woman who refused to listen to the endless stream of people who told her who she was and what she wanted was almost impossible.

When I look into a trans women’s eyes, I see a profound appreciation for how empowering it can be to be female, an appreciation that seems lost on virtually all cis privileged women who sadly take their identities and anatomies for granted, or who perpetually seek to cast themselves as victims.

In a trans women’s eyes, I see the wisdom that can only come from having to fight unimaginably hard to for the right to be female and a raw strength that comes from unabashedly asserting to be feminine in an inhospitable world.

In a trans women’s eyes, I see someone who understands that in a culture that’s seemingly fuelled by binary gender hysteria, choosing to be female and openly expressing one’s femininity is not a sign of frivolousness, weakness or passivity….but is in fact, a badge of courage.

If I have a problem with Whipping Girl, it is the overuse of irritating academic words that I often had to put into a dictionary. Julia likes to “invent” words too, some of which has found their way into trans activists’ life.  The other irritation is the book is written for an American audience, and certain events or people are not known in the UK.

But ignoring those small criticisms, Julia Serano is proud of Whipping Girl as shown in her notes in the second edition, (the one which I read). The latest edition also has a few updates from the first edition, so do try and read the more modern version if possible.

It is the best read ever and two gender books that I have subsequently read refer to Whipping Girl on an ongoing basis. In consequence, Whipping Girl by Julia Serano is a bible.

A bible for trans folk, feminists and humanity.

I dare any gender-critical radical feminist to read it and not be moved.

And I am moved. Because I should not get angry about the TERF wars, but I do.

Because I hate with a vengeance, discrimination and prejudice and it filters through to my “anger pot” and boils.