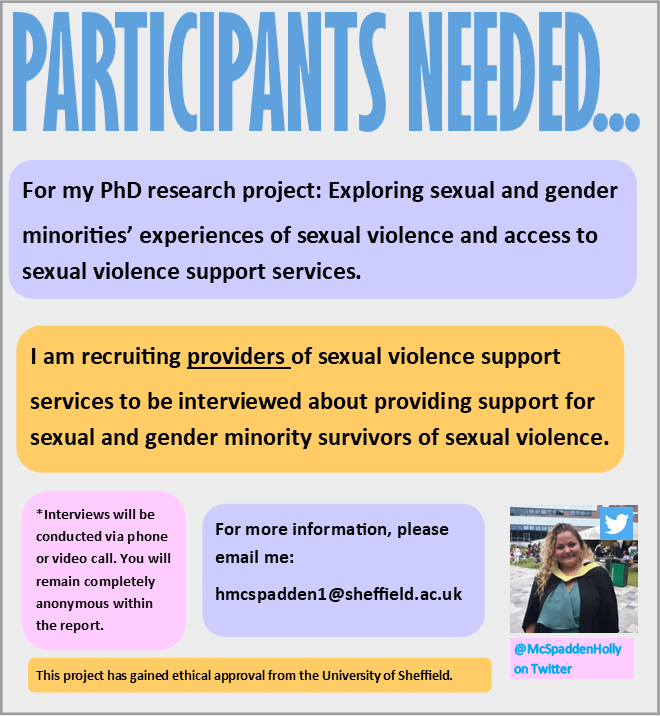 My research centres individuals’ whose identities have been underrepresented within the public discourse surrounding sexual violence. Hence, it takes a self-identifying approach, and welcomes the participation of any individual who identifies as a lesbian, bisexual, or queer woman, or non-binary, agender, or gender-variant person (please see my participation flyer below for more details on participation requirements).

My research explores these survivors’ experiences of sexual violence, as well as their access to sexual violence support services. So far, the literature on the topic has pointed towards a number of barriers in the way of support for LGBTQ+ survivors. These barriers include: a lack of awareness from services about the specific forms of sexual violence faced by sexual and gender minorities; survivors fearing discrimination from service providers on the basis of their sexual and/or gender identity; survivors not knowing that services are LGBTQ+ inclusive. My research aims to uncover what more can be done to ensure that these barriers are removed, to promote guidelines on best practice for services supporting sexual and gender minority survivors.

Additionally, I am recruiting providers of sexual violence support to participate in interviews. These interviews will focus on the inclusion of sexual and gender minority survivors within services. I am particularly keen to hear from providers of LGBTQ+ specific services as well as women-only support services.