Discriminatory, Transphobic, or Cissexist? You Make Your Own Mind Up 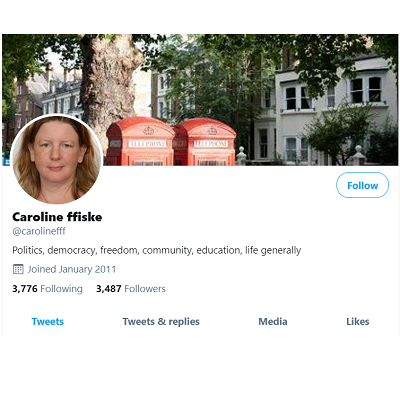 Recently, I blogged about The Conservative Woman an online platform whose strapline is "The philosophy not the party". I find the 'About Us' pretty strange because they don't define what their aims are its just a list of writers and editorial team etc.

You get more of a clue when you go to the donate page which says this- 'We are dedicated to defending and extolling socially conservative values. We want to stem the tide of cultural Marxism and advance the cause of traditional British values'.

Looking more closely at their website, they seem to have a pretty extensive list of topics: Brexit, the BBC, Culture, America and many others. Indeed, issues that I would have an interest in as well, though I would assume they know full well they are either directly or indirectly involved in discrimination, cissexism and transphobia.

But dig more closely, and things get even more concerning because it would appear, one writer, Caroline ffiske, uses The Conservative Woman as a mouthpiece for her crusade against trans people and gender matters.

I have not looked at all her articles too deeply because quite frankly, I fear I may vomit. But suffice to say Caroline ffiske has posted 16 times in The Conservative Woman since January 23rd 2020 and 14 of those posts have been on the subject of trans & gender.

Which seems even more strange when you look at her Twitter account because Caroline ffiske states her interests are:- Politics, democracy, freedom, community, education, life generally.

Now I share all of these interests, so we certainly have something in common.

But what I don't understand is why Caroline fails to list on her Twitter interest declaration her apparent compulsion to write about trans issues virtually all the time.

Does Caroline ffiske have anything nice to say about trans people?... I don't know; perhaps she will let me know one day. In fact, I would invite Caroline to contact me because somehow, trans and tea's have got to learn to live with each other.

The fact is we do have to talk, however repugnant that may well be to both sides, and I would be interested to see if I can find common ground with someone from the other side.

Then I looked at Caroline's Twitter feed, and her agenda became exceptionally clear. Caroline is pretty much obsessed with the women's places debate and happily retweeted a post from #NotoSelfID on the 26th of May.

So here is the crunch, Caroline.

On Twitter, you state your interest is 'Freedom', but you are a supporter of  'NotoSelfID'.

If trans people are denied to the right to self-id, doesn't that go entirely against freedom?

Trans people want the freedom to state their gender, but you and your allies want to deny trans people that exact freedom!

So could I, rudely perhaps, suggest that next time you write an article for The Conservative Women instead of writing about trans people you write a long piece about the hypocrisy in the TERF, TEA and Gender Critical community?