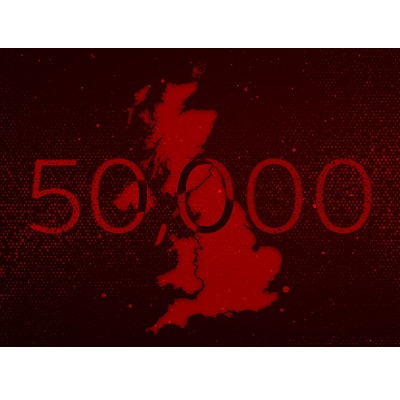 When I launched my website, I had the principal I would try and stay politically neutral - after all, I am courting Conservative opinion in regards to trans rights. Pretty much everyone else is on board the trans bus.

But I owe it to my 500 trans brothers and sisters to say something, and I owe it to the 49,500 other souls as well all of whom have died in the UK because of coronavirus - COVID-19.

I recall watching one of the Downing Street briefings and an expert scientist saying if we could keep the death toll under 20,000 people we as a country "would do well".  I baulked at that figure, and if I recall, correctly we had a death toll of about 5000 or so at that time.

Put in perspective, that is about 33 times more people than died on the Titanic.

These are not just bad figures they are world-leadingly bad... in particularly given the size of our population.  Currently, other countries like Taiwan, Singapore and Vietnam knock spots off of our "stats".  And going to the west, even a developing country like Cuba has stats much better than us.

So much has gone wrong.

We are an island and could have reacted like New Zealand...but we did not.

We did not have enough PPE for our NHS staff, and some of it was past the use-by date.

We were being told not to wear masks, after all, we are "British" arent we - and we know best. Now, three months later, it is becoming a law that in certain places, we must wear a mask or face a fine.

Surely the use of a mask from day one was common sense?

I recall going to the supermarket in late March and I wore a mask. At the checkout, a lady asked me if I was infectious and I replied I was taking precautions and that I suspected we would all be wearing a mask in a few months.

I based that on my trips in previous years to Hong Kong and Taiwan where masks have been worn for decades.

We were told we would have a "world-leading" test & trace app in two weeks - it failed to get past the Isle of Wight. And at the time of writing a new app is possibly months away.

The economy is "shot" making the banking crisis a mini-trial run which my children and grandchildren will be paying for probably the next decade or even longer.

Well possibly, he may have done, we will never know.

But I am pretty sure the average woman (or man) in the street would have got it better as alleged "experts" have made several terrible errors - and over 50,000 souls have paid for those errors with their lives.

We know all about experts.

We had experts tell Tony Blair that Iraq had weapons of mass destruction and that they had a "supergun" trained on 10 Downing Street.

The politicians (well most anyway) believed it - the public did not.

The British public will in just over four years time judge this Conservative government. Trans people will judge on the basis of not just coronavirus but the reform of the Gender Recognition Act.

Whatever the result of the next election -  the fact is it will not bring back my two neighbours who died from COVID-19.

This blog is based (in part) on a video from Aaron Bastani of Novara Media - a link is below.