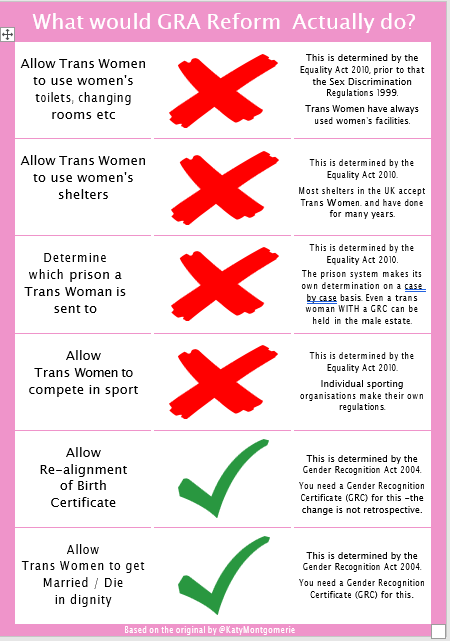 In the early hours of Tuesday morning, the Women & Equalities Committee (W&EC) published a report concerning the reform of the Gender Recognition Act.

The 113-page report was scathing of both the government under the Premiership of Boris Johnson, his Women & Equalities Ministers Liz Truss and Kemi Badenoch and the EHRC, saying, "We condemn the negligible engagement with our inquiry by both the Government Equalities Office Ministers and the EHRC.

This was surprising because the W&EC have a Tory chair in Caroline Nokes and is top-heavy in Tory members.

The report clarified the frustrations in the progress of proper GRA reform and, in particular, slated Truss & Badenoch for failing to respond to the Committee's demands to give evidence.

Clearly, there was a story to be had on two fronts.

Firstly, the report promoted a Self-ID model regarding GRA reform, positioning the UK with countries like Pakistan, Ireland, Argentina, Brazil, Belgium, and many other nations. Indeed within the last four weeks both Germany and New Zealand announced they too intended to go with the Self-ID model in relation to legal gender identity. Self-ID is not controversial, except of course in "Terf Island" where a few gender criticals succeed in making a lot of noise.

Secondly, here was a minister, Liz Truss, the darling of the Conservative party and tipped by many to be the next PM, in deep hot water for failing in her duty to appear in front of the Select Committee.

But who reported these issues - or more to the point who did not?

From what I have been able to ascertain, The Times and Telegraph, both known for the love of trans hostile stories, failed to mention either the proposal of Self-ID or the massive Tory fallout.

The BBC, also known to be trans hostile (look no further than that scandalous 3800-word Lesbian article), produced a 579-word piece - not even naming the journalist who wrote it -  who also ignored the massive Tory bust-up.

Pretty damning in relation to whose side they are on!

So much for transparent BBC journalism that they allege, "we can trust" (lol).

But perhaps the tops marks must go to the Daily Mail Online, the journalist being Danyal Hussain with the headline - "Feminist professor leads fury as MPs say trans people should be able to self-declare their legal gender despite warnings from campaigners it could make it impossible to implement single-sex spaces."

In my opinion, Danyal wrote a deeply flawed piece regarding content that, worse still, was hugely biased.

His article failed to mention that GRA reform has nothing to do with single-sex spaces; indeed, his report suggested the exact opposite. For those not aware single-sex spaces are already protected by way of the 2010 Equality Act, which got scant mention in his article. GRA reform will simply enable a successful applicant to change the sex marker on their birth certificate.

A birth certificate does not give access to single-sex spaces, and indeed service providers have a legal right by way of the Equality Act to refuse entry to anyone as long as their actions are "proportionate to a legitimate aim".

Danyal Hussain also failed to produce a balanced piece getting four quotes from trans hostile academics and activists. Danyal quoted Stock, Williams, Freedman and Sullivan apparently not interested in getting input from trans people or trans organisations such as Stonewall, Gires or the Feminist Gender Equality Network (FGEN).

Professor Sally Hines (Sheffield University) founded FGEN - an academic like Stock, Freedman and Sullivan - but Danyal Hussain failed to hear their voice despite the massive 1500 strong (and rapidly growing) membership. Sally was also a significant contributor in the Sociological Review's book TERF Wars.

Worse still was that Hussain decided to include a video from LBC in which Stock makes her usual misguided allegations. My co-editor Paul comprehensively debunked her performance on this website just two days ago.

So was Danyal Hussain's story clickbait?

Who on this earth believes that a mainstream online newspaper should seek to get four "anti" views and not balance it with an equal number of "pro" views?

The Mail, of course, often likes to be on the 'cutting edge' of controversial journalism.

Famous for its pro-nazi stance in the 1930s -  George Clooney, the actor, described the paper as “The worst kind of tabloid” in 2014 - rejecting the Daily Mail's apology for printing a false story.

Did Danyal Hussain purposely write his story in such a biased way?

Or was some pro-trans voices cut out by the editors?

Or did the Mail instruct Hussain to exclude trans voices?

Well, I did reach out to Danyal Hussain and ask him by way of a direct message on Twitter (@danhjourno)

Sadly to date, Danyal has not replied.

Fortunately, the odd journalist did produce an accurate piece, so thanks to Nick Duffy of I News, who did at least get his facts right, if not mentioning the Tory bust-up.

As for Mr Danyal Hussain, he joins the growing list of journalists like Sonia Sodha, Hannah Barnes, and Caroline Lowbridge, who many trans folk view as being less than sympathetic to a marginalised and much-maligned community.