26th March. Debbie Hayton, Not in Our Name.

Debbie Hayton do not speak for the everyday trans person. 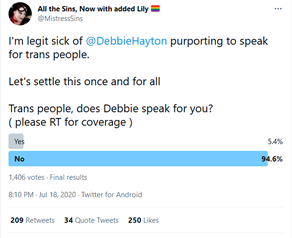 Debbie Hayton is no stranger to controversy, and of late, her articles have appeared to be become more regular, especially in the right-wing press. The Spectator for one, together with The Times, National Review, and many other magazines or newspapers.

It is a shame that many newspapers don’t appear to want other trans women journalists to write about trans issues. However, it would appear that Debbie Hayton’s opinions suit the newspapers narrative to be invariably ‘anti- trans’.

One issue that is frustrating is that the word “transgender” or “trans woman” is used as keywords in articles in very strategic places to validate and catch both Google and the reader's eye. The reader, of course, is unlikely to be aware of Debbie’s history.

Debbie (apparently) transitioned in 2012 and works as a teacher. She (I assume that is the correct pronoun) deeply upset trans women and our allies across the UK, by wearing a T-shirt in 2019 with the words “Trans Women are Men” causing colossal offence.

We see it as an insult as indeed do other trans women who like me have “f” firmly printed in our passports. As it happens, Debbie Hayton has a passport with “f” marked in it too. She told us that by a tweet on the 25th November 2020.

To be honest, the rest of my community and I are very confused.

We see that image of that T-shirt saying trans women are men (“m”) - and then soon afterwards, Debbie says she has an “f” in her passport. Sometime back, Debbie wrote this in the Spectator:

"As a trans woman, who also happens to be a science teacher, I know that trans women are most definitely male".

Now I am sure you get my gist. A male to female transition, then that T-shirt - then the passport- then the article in The Spectator. All very contradictory. Debbie may well be talking about biological sex - but all the trans people I know (and I know hundreds) talk about gender, not sex.

We determine sex in society by gender expression - we dont ask to look at other people's genitals.

In December 2019, The Times reported Debbie Hayton’s troubles with the TUC LGBT Committee. Many other right-wing newspapers covered the story too. Again, this meets with their narrative that the trans lobby is bullies and trying to erase women - that trans rights conflict with women’s rights.

When I read what Debbie writes, I sometimes shake my head in disbelief. On her website, she wrote that “the UK is a safe and welcoming place for transgender people.”

What planet is she on?

With the right-wing press spurting anti-trans rhetoric on a seemingly daily basis – with hate crime reports rocketing by some 4000% over the last five years in some areas - with anti-trans women’s groups smearing us too. We can then look at Twitter and all the good people - trans people hounded off in the past year like Munroe Bergdorf, to name just one of many!

I wholly reject that the ‘trans lobby’ are unreasonable folk or anarchists. I refuse to accept we are an ideology, as many anti-trans activists claim, it an attempt to politicise us - we are people.

I know of a former British Airways senior airline pilot, a lawyer, a doctor, a designer. I myself, who is some 18 years older than Debbie Hayton, was the lead speaker at an International Safety Conference - we are all trans women and activists to one level or another.

When given the opportunity, trans folk are decent, hardworking, and sometimes very clever people.

The chances are you are reading this piece on a mobile device, a phone or perhaps a tablet, for instance. Except what you are really using is a computer that can do all sorts of amazing things from making phone calls, watching a video, taking a photograph, and accessing instant updates on how the Queen's horse is running in the 3:30 at Ascot.

And the critical bit to your mobile device is the processor. It will almost certainly be one of the 'Arm' designed processors, and the principal designer for Arm is Sophie Wilson, who, yes, is trans woman!

Poor gender-crits on discovering their mobile phone, to which they all rely on, is so full of transness!

But before I wrote this piece, I wanted to ask my community what they thought about Debbie Hayton, so, I asked my followers by way of a Twitter poll if Debbie Hayton spoke for them?

Now I have some 1250 [note this article was originally written before Steph's Place became an organisation, now with near 3000 Twitter followers] followers on Twitter, many are not trans, some not in the UK, but for sure, a good number of my followers are trans. And the result was conclusive. One hundred sixty-six people voted, and 95.2% of voters said Debbie Hayton did not speak for them.

The result was similar to one asked by Lily, a trans rights activist based in Edinburgh, on the 18th July 2020 when 1406 votes were cast, and 94.6% of people voted that Debbie Hayton did not speak for them either.

I then asked my followers what their opinion of Debbie Hayton is. Again, I got shed loads of replies. Now apologies to many but defamatory & libel laws have to be observed. I do not fancy being in court with Debbie Hayton. For sure, if a right-wing newspaper does not back her (wanting the story rights, of course), a transphobic women’s group will crowdfund her in ten minutes. So here is just a few of those I feel confident enough to publish, some edited.

So, the bottom line of this blog is straightforward.

Debbie, you do not speak for trans folk.

You speak for yourself, your anti-trans paymasters and the type of anti-trans audience who want to hear you - using “trans woman” as a passport to validify your writing.

Not in my name Debbie Hayton.

This article was updated May 1st 2022