We Stand With Dr Helen Webberley 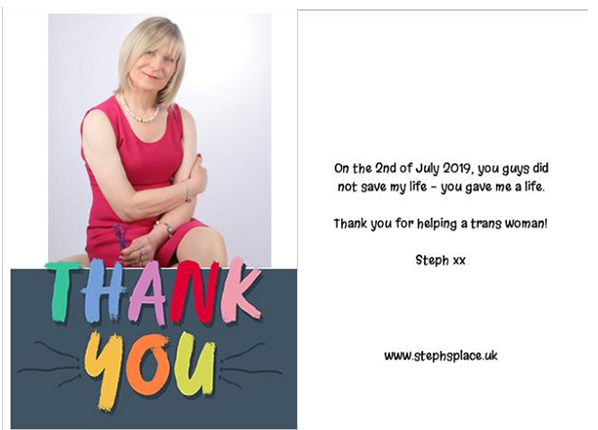 Do you have a hero?

I mean someone you admire - that you personally look up to as the epitome of mankind?

I must admit I have two heroes.

Alan Turing - who else? That gay guy who is now credited to have saved tens of thousands of lives because of his genius - but at the time was ridiculed, hounded from his job and subsequently committed suicide.

And my other hero? Well, she stands before you today.

Now I could write pages about my life - all 69 years of it, the vast majority of it suffering from gender dysphoria. I could tell you about the self-harm that I inflicted and that day when I planned my end - but I am not. Instead, I am going to tell you about two caring women, both of whom were active GP's, one named Emma and the other Helen.

Emma was my GP; she was middle-aged, with a beautiful smile, and cared about people. And as I cried in her surgery, coming out that I was trans, she listened, she passed me a tissue, and we worked through it. Within a few short weeks, I was on hormones, and my life changed.

Changed for the better!

But I was lucky - Emma listened, but I know full well the majority of GP's dont listen - patients are put in years-long queues resulting in mental health issues or worse.

I know because I talk to hundreds of trans people each year.

My paths crossed with GenderGP about three years ago - I desperately wanted surgery to complete my journey, but as usual for trans folk, there was no one to help.

Emma? Sadly, she quit being a GP and went to work for the DVLA of all people saying the NHS was broken.

But as I lost Emma, then Helen appeared - yes, that Helen before you today. Thanks to GenderGP, I got my surgery on the 2nd of July 2019.

And every year at the end of June, I send the hospital where I had my surgery a "Thank You" card, and I write the same message.

But what of Helen - Helen Webberley?

She was an active GP who discovered that trans healthcare was not broken - it did not properly exist!

And like Emma, she went the extra mile, but not for one trans person but for dozens, then hundreds and then thousands. Patients of all ages, working to recognised world standards that seem to have passed the NHS by.

Well, now I am a trans rights activist, that aims to help trans folk with a website that I share with others - and we have thousands of visits each week. So yes, I do talk to other trans folk on a very regular basis, and guess what? I never hear a bad word within the trans community about GenderGP.

Nothing but criticism of traditional NHS healthcare, of course, - those original GIC's and GID's are a farce!

But GenderGP they have it right, and within the trans community, we would certainly like them to operate trans healthcare on a national basis.

So as you sit in judgement of Helen Webberley, I, no, we as a community ask you to consider just one thing.

We are the people.

This open letter is supported by: