8th August. Dress however you please. 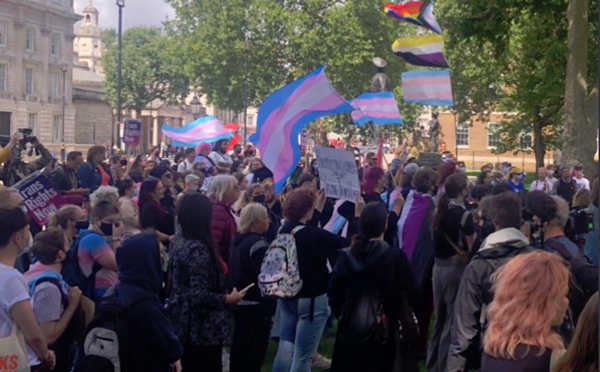 Dress however you please. Call yourself whatever you like. Sleep with any consenting adult who'll have you. Live your best life in peace and security.

So goes the first four lines of 'that' tweet from J.K.Rowling that caused so much fuss back in December 2019.

Except it appears, we can't dress how we please or live our best life in peace and security.

Some gender critical 'oh, we are not transphobic'  have made sure of that.

On Friday 6th of August, Paul (a cis ally and co-editor of this website) and I attended a Trans Right's Protest in Downing Steet, London. It was the first-ever protest I have ever been to, and as I walked along Parliament Street, I was excited to see other members of my community. "Where have you been" asked a Twitter follower earlier in the day, realising at 69 years of age, I was very late to the party. "I was a late developer", I replied.

Late I was, but not to the protest and immediately met up with Paul and his beautiful trans daughter. As I looked into the gathering crowd, I started to smile. There were people of different colour, shapes, ages and, yes, religions identifiable by their traditional religious clothing.

And my heart warmed.

Some people (especially girls) had their faces painted with trans flags; one guy had trans flag boots with huge heels, another had a womens ombre crop top also resembling the trans flag of blue, pink and white.

Flags flew, people held up banners, some homemade, some predicably printed by the 'Socialist Worker'. One large guy with a ponytail was wearing a high-vis jacket with what I took as a man's skirt, and for sure, there were people with trans colours in their hair.

I did not see anything indecent, and having seen pictures of Cologne Pride; I can honestly say what people were wearing was, in comparison, very tame. Indeed I would say, in fact, 90% conventional.

Okay, I was at the very back, and for sure, I could not see all of the speaker's platform, nor because of the sound quality of the PA system could I hear all the speeches clearly, but I saw or heard NOTHING remotely offensive at all.

For sure, that was also the view of the police who were in attendance. When I arrived, many police in uniform were minging in the crowd but satisfied there were no issues; most withdrew, just leaving the odd police liaison officer happily strolling around the crowd of a thousand or so.

As the various speakers gave their speeches, there were claps and cheers, and for sure most speeches centred on the appaling state of trans healthcare, the fact that newspapers and GC journalists invariably tell lies about the trans community, misgendering, diversity and, of course, GRA reform.

Someone called Andy Ngo (who has quite a history according to Wiki)  had tweeted, "a person wearing a baby costume w/a button that read slut."

Actually, what was being worn was pink dungarees and why not?

Who did it hurt?

The GC loved it, of course, as Andy was probably only too aware - forgetting I am sure that GC's hero JKR fully sanctioned trans people to "dress however you please".

Not that trans folk need permission from anyone in relation to what we wear - we will wear whatever we want!

And I did Andy - I wore what I wanted - a Marks & Spencer floral dress that fell just below the knee.

You didn't want your photographer to take my photo, though did you, Andy? If I am wrong do let me know, I quite fancy another free photoshoot.

Nor indeed images of the crowd.

I notice from your tweet images no wide shots nor references to Pink News and all their images, not to mention their video coverage.

Are some people so desperate to defam trans folk?

Is it true you live in London now Andy? - I see the wiki entry says you moved to the UK from the US because you did not feel safe.

I don't feel safe either Andy.

And what about those links Andy, to surprise, surprise the Heritage Foundation - that right-wing extremist group that rides in tandem with the ADF who have successfully all but banned abortion in Texas come September the 1st?

That law that virtually bans abortion in Texas outright - or how about the other 600 or so laws that have come out in 47 states in the US so far this year which also curtails womens abortion rights?

Personally, Andy, I think it all sucks - as do other UK women.