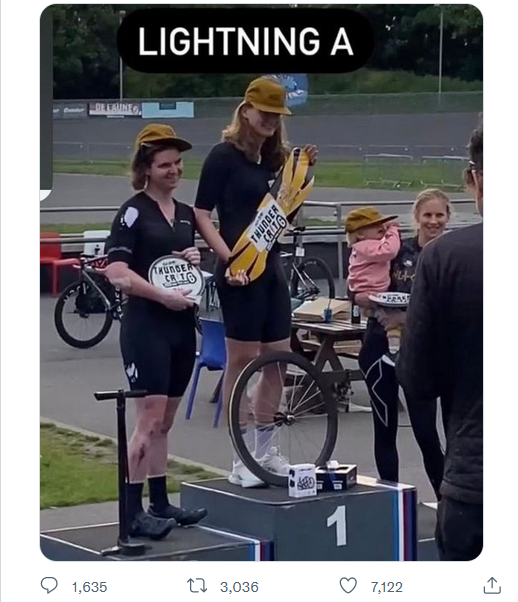 At 6:00 pm on the evening of June 3rd, in a relatively unknown velodrome in South East London, a grassroots cycle race was about to begin. This was not an elite race or even controlled by British Cycling - it was purely about "fun". There were no medals, no anticipation that even the local rag would report on the race, not until one name cropped up, that of Emily Bridges.

Emily Bridges is a trans woman cruelly robbed of the chance to represent her country thanks to an apparent "clerical error" at either British Cycling or the world governing body, the Union Cycliste Internationale, invariably known as the UCI.

What made this race unusual was that it was an "open race" - meaning pretty much anyone involved in the sport of cycling could take part irrespective of gender or sex.

The whole point of the race, known as the 'Thundercrit', was the inclusion of trans people and Emily, being an Elite athlete, won the race with another trans woman second and a cisgender woman, Jo Smith, third.

What resulted after the result was a classic case of transphobia headed up by the Daily Mail and Daily Express. Cycling Weekly takes up this story saying:

Bridges won the 'Lightning Category', which was advertised in advance as being open to "trans men and women whose physical performance aligns most closely with cis-women", and had seven entrants in total. Lilly Chant - who identifies as female - was second. Third place went to cis-female, and NLTCBMBC fixed crit racer Jo Smith. The Mail stated that the race had the result of "leaving [the], young mother, in third", choosing to publish the story with a podium shot of Bridges and Chant kissing, alongside Smith, carrying her child to the podium. The Express said that "the gold and silver podium winners were both male-born", adding "the gold medal went to Emily Bridges."

No medals were awarded. Rather than lamenting being "left" in third place, Smith celebrated the result, telling Cycling Weekly: "I was happy to be on the podium." Discussing the racing format, she added: "This was an event with a different setup, open to all across the two categories, and not a women's race. It's also not a race that will get anyone a professional contract, sponsor or any kind of huge reward, financial or otherwise."

Perhaps most shameful was the fact that a trans hostile sports celebrity, Sharron Davies, said she was 'very disappointed' at the news of the race.

For only weeks earlier, Davies, on the 22nd of March wrote in the Mail, "I don't want trans athletes excluded."

So why is Davies "very disappointed" that Emily Bridges took part in a race designed explicitly for inclusion - perhaps Sharron Davies would be kind enough to let us know.

But this story doesn't stop here because in fourth place was another cisgender woman Kitty Dennis saying after the race:

"As a cis-woman I felt happy to compete and didn't feel it was unfair. This isn’t a serious sporting competition, it’s about having fun and spending time with your friends! I can understand there being a time and a place to explore new competitive categories, and a low-stakes, community-run event where all the competitors are keen to help find solutions seems like the right place for it."

So I come back to the fact that Davies, who would appear to know nothing about this event, was "very disappointed" - when cisgender competitors had different views.

Davies has often said she is not transphobic, but given the circumstances of the race, why the comment?

Not to be outdone, the Mail also got a quote from Fair Play For Women, infamous for sending tweets laughing about transgender women being overwhelmed by a virus "like 1000 cancers" and described by ILGA (an International LGBT organisation) as "anti-trans".

Fair Play for Women said 'It's inevitable that if we're going to allow people who have been through male puberty into the category that is supposed to be for females, those people are going to outperform.

But Davies & Fair Play for Women were not the only ones to launch an attack on Emily Bridges - numerous gender-critical Twitter accounts did.

For example, Womens Rights Network a gender-critical group that some trans people have in the past suggested are a "hate group" tweeted this:

"BREAKING  Emily Bridges and Lilly Chant take 1st and 2nd place in tonight’s Thundercrit cycle race at Herne Hill Velodrome. Notice anything different about them compared to the cyclist who takes third place?

And the Twitter account @gunsandbanjos with the bio "I Stand With J K Rowling" (well, who else) tweeted this tagging in: @Sharron62 (Sharron Davies) and @Martina (Martina Navratilova)

"this might be the picture that encapsulates males in women's sports so perfectly. Two males celebrating first and second place, and the woman with her child looking on in third. Heartbreaking".

And the response from Navratilova - who, like Davies, also claims to want to include trans people in sport was this: "This is where we are heading unless people wake up."

No one doubts that trans women in elite sports are a contentious issue. Still, this article demonstrates that transphobia (definition being the prejudice of a transgender person) is rife in the UK in particular from the Daily Mail and the right-wing media.

A trans athlete can't even compete in a fun event without widespread reporting and being subjected to the most disgusting, no abhorrent comments.

As for Sharron Davies & Martina Navratilova, I have no words, except perhaps this.

Do they understand the meaning of both transphobia and hypocrisy?