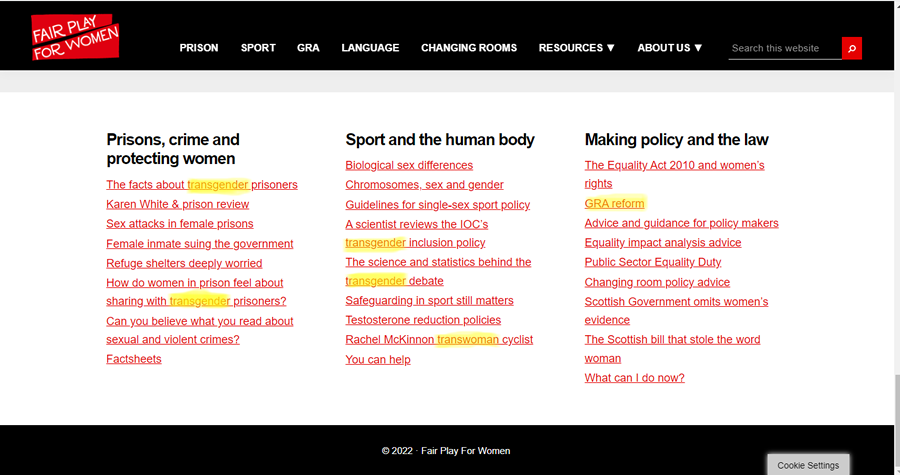 On the 21st of December 2021, the Women and Equalities Select Committee (WESC) published its report regarding the Gender Recognition Act reform. Similar to their report in 2015, the report recommended Self-ID, meaning that both trans men and trans women could update their birth certificates in a more humane way than is currently possible.

It is important to note that the "new" birth certificate is not retrospective - it does not wipe out history; it records a journey - arguably one of the most difficult in humanity - a change of sex.

The report, whilst welcome, has one very significant concern.

It describes trans hostile opposition groups as "stakeholders". These groups can appear to be transphobic organisations that hide their agenda under the cloak of "women's rights".

Whilst some of these groups have in the past defined the meaning of “transphobic” as being the "fear" of trans people - Oxford Languages, formerly known as the Oxford English Dictionary with a history going back to 1884, says different. Their definition (courtesy of Google) "is the dislike of or prejudice against transsexual or transgender people".

There is a lot of difference between "fear" and "prejudice".

The calling of these groups as "stakeholders" has caused significant distress in the trans community.

If the WESC were, for example, investigating racism or immigration, would they ask the British National Party to give evidence? I am sure there would be a significant backlash if they did.

Hate is becoming almost a national pastime in the UK - stirred by a Conservative government and a right-wing lackey press. "Free speech" is the cloak of "hate speech" - "woke" the cloak of persecuting minorities.

It is becoming challenging to call out hate; our government doesn’t have the decency to make misogyny a crime.

In the United States, minority groups can look to organisations like The Southern Poverty Law Centre (SPLC) who monitor hate groups using similar criteria to the FBI.

Wikipedia says this regarding the definition of a hate group:

A hate group is a social group that advocates and practices hatred, hostility, or violence towards members of a race, ethnicity, nation, religion, gender, gender identity, sexual orientation or any other designated sector of society. According to the United States Federal Bureau of Investigation (FBI), a hate group's "primary purpose is to promote animosity, hostility, and malice against persons belonging to a race, religion, disability, sexual orientation, or ethnicity/national origin which differs from that of the members of the organization."

One organisation unhappy with the WESC report is called Fair Play for Women.

The WESC designates them as a "stakeholder" in my and other trans peoples birth certificates.

Fair Play for Women responded to the WESC report on the 21st of December 2021, saying this.

There is a fundamental problem there with the way that single-sex spaces work, because the Equality Act provides women with the opportunity to have female-only spaces but based on their birth sex. It provides a way for spaces to be reserved for people who are born female. If there is then also a separate law that allows people to hide the fact of their birth sex, there is an incompatibility. We cannot have both laws without a conflict. We have the single-sex spaces based on birth sex, but there is another law that allows birth sex to be hidden. That means that, although on paper, it looks like women have a law on single-sex spaces, they cannot implement it.”

Who is discussing the Equality Act?

Why the conflation of GRA reform and the Equality Act?

Spaces do not belong to a 'sex' - they belong to the service provider who operates their service according to their policies.

At Steph's Place, we made our opinions known on single-sex spaces, which we published on the 9th of July 2021. I wrote the piece myself, so I know exactly what I wrote – I respect the need for single-sex spaces and access to them must be on a case by case basis.

A core principle of the Equality Act is that service providers can refuse anyone access. It is their spaces, but they can only refuse “proportionate to a legitimate aim”.

Frankly, I am at a loss why Fair Play for Women make this allegation that birth certificates are or could be used to gain access to single-sex spaces, which they, nor indeed a "sex," DO NOT OWN!

Who uses a birth certificate for ID?

If we are asked for ID, we use a bank statement, a letter from perhaps HMRC - and if required to give photographic ID, we use a driving licence or passport.

But who gives a birth certificate for ID?

Seriously, do you know where yours is?

Do you carry it in your bag or pocket?

Have you ever used one for ID other than perhaps marriage, divorce or death?

I have a "female" passport, and I am pretty damn sure it would get me into a single-sex space. But why would I want to infringe on a place where perhaps I was not wanted?

Do Fair Play for Women think I, or indeed other trans women want to upset other women?

Do people understand what a hate group is?

"a hate group's "primary purpose is to promote animosity, hostility, and malice against persons belonging to a race, religion, disability, sexual orientation, or ethnicity/national origin which differs from that of the members of the organization".

Why does Fair Play for Women appear to be so obsessed with people like me?

Do Fair Play for Women not realise that even after having had lower genital surgery I do not qualify for a Gender Recognition Certificate? That my trans siblings have similar problems?

That the Gender Recognition Act DO NOT WORK!

Any trans people members of Fair Play for Women?

If so, please let me know.