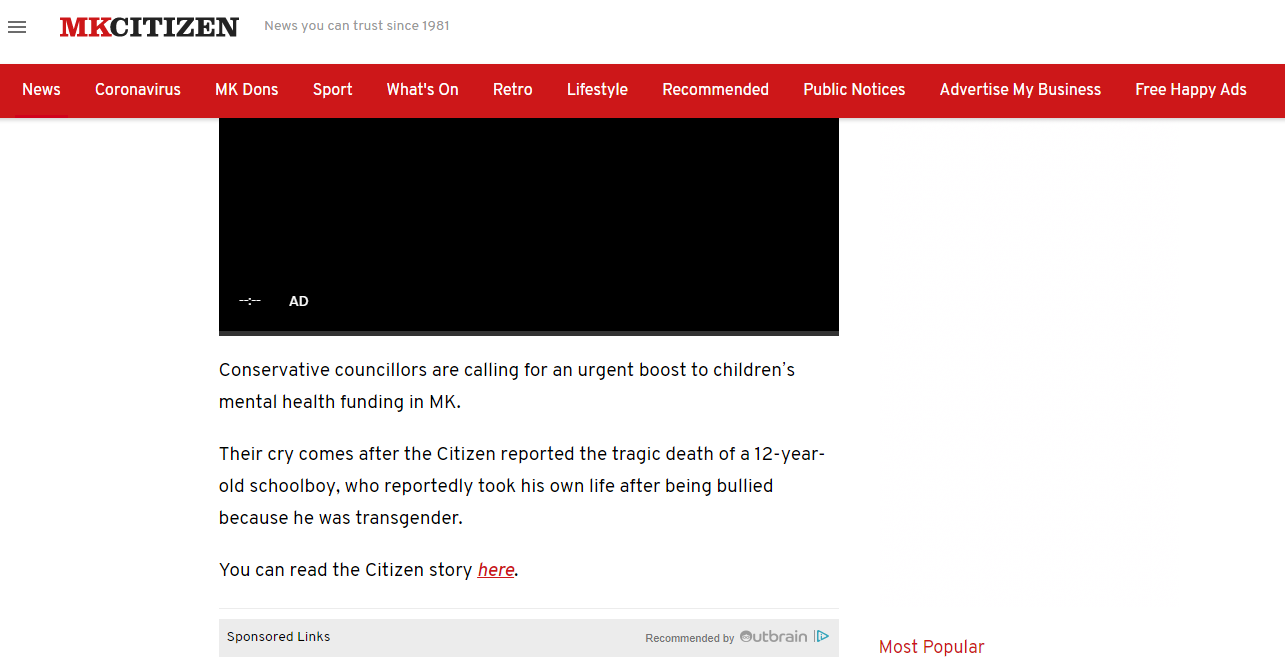 Tories - are not known for being kind, and indeed, this government are, in my lifetime, the worst yet. There was a time when caught lying, an MP would resign immediately - now, being "a good liar" can be seen to be a prerequisite of being an MP.

Boris is, of course, the king of the liars and his favourites defend him to the hilt, often creating deflecting stories to "take the pressure off" the numerous scandalous stories emerging from 10 Downing Street.

MP's like Suella Braverman, the MP for Fareham, who suddenly decided to 'punch down' on transgender kids.

As it happens, I know Fareham very well, it's just ten minutes up the road from me. Once, it had a thriving shopping area where stores like Marks & Spencers, BHS, Debenhams, Argos all traded. Now Fareham has a host of boarded-up shop shells that even charities refuse to occupy. Sure, the charities tried, but the Conservative-led council consisting of twenty-five Tories, five liberals, together with an independent appear to lack the vision of a newt in a sewage-infested pond.

Gone are the days of going to Fareham for a shop, Braverman and her elderly (not that I can talk having just reached the big seven 0), Tory mates have seen to that. Fareham is the opposite of Worthing, where a Labour council has transformed the town in just five years. Both are coastal towns - sharing similar demographics and infrastructure but currently have very different futures. Fortunately, the residents of Worthing kicked out the Tories.

Perhaps there is hope for Fareham yet.

But instead of working on sorting out all of Fareham's issues, Braverman hits out at a tiny minority of disadvantaged kids. Kids it can be argued, have mental health issues. The Times headline read 'Teachers should not pander to trans pupils'  going on to say "schools should take a “much firmer line by treating trans youth as the gender, they were assigned at birth".

Does she condone conversion therapy?

Is she aware that the majority of trans kids realise they are likely trans well before puberty?

Answers on a postcard.

According to TheyWorkForYou.com Braverman's voting record on human rights is genuinely shocking.

Within minutes of the Braverman article, numerous MP's, charities, teachers, unions and journalists were rightly calling her out on Twitter.

The National Education Union tweeted "Discrimination against transgender pupils is illegal under 2010 Equalities Act. Schools should ignore the Attorney General’s advice and continue to treat their transgender pupils with the dignity and respect they are entitled to."

Lord Michael Cashman tweeted "A vile, desperate government with lacklustre ministers stoking their culture wars. Britain deserves better" while Ben Bradshaw MP tweeted " What makes Ministers in this Government get up in the morning & think: “what hateful & hurtful thing can I say today about a very vulnerable minority of young people?” Replace “trans” with “black” or “gay” & you get my drift. We’re back to Section 28, but this is worse".

Owen Jones a journalist with over a million followers tweeted  "Those who paved the way to a new Section 28 by whipping up a moral panic about one of the most marginalised minorities in the country have no idea how much hurt and distress they've caused, and nor do they appear to have any shame".

I wonder if Braverman has ever met a trans person? If not, I will gladly pop up - diversity education is free even to Tories despite the harm they do our tiny community.

I will explain to her what it's like to be trans: wrongness, desperation, disgust, pain, self-hate....drowning.

The pain that a 12-year-old trans kid from Milton Keynes felt because of alleged bullying at school and refusal to accept his gender identity by both staff and pupils - driving him to take his own life.

Thanks, Suella Braverman - be Tory proud.

Fortunately, not all in the Tory party are like you, but Fareham would be a nicer place to visit if you were all gone.