18th of October. Fly the Flag - The Inquest. 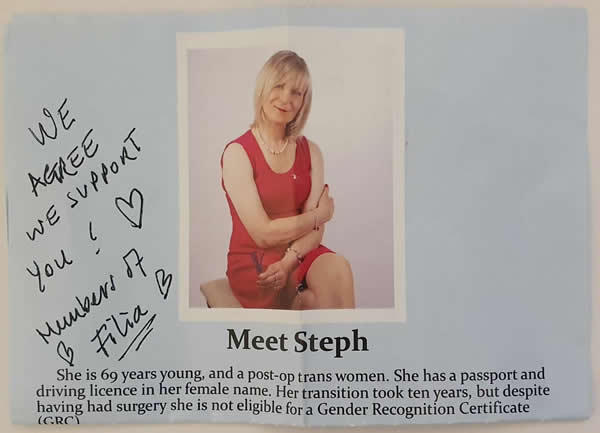 Where do I start?

Well, I suppose at the beginning. For whatever reason, FiLiA decided to bring their conference to my home city. Postponed from the previous year, there was plenty of warning, and the local anti-fascist group quickly made it known there were not happy, resulting in FiLiA putting out a statement in response.

FiLiA admitted they support LGB Alliance, a group that most trans people would consider transphobic and toxic.

Red rag to a bull for sure.

Meanwhile, I heard that internal discussions were held amongst various pro-trans groups and within the local political parties, but no group spoke to each other. There were no meetings so we could agree on a strategy. My only contact was with an LGBT+ activist, a gay man I will call Dave.

Within our group at Steph's Place, we (more like me given the others are not local) decided not to stage a significant protest but to centre on a public awareness campaign around GRA reform, one of the six declared aims we have within our group.

We tied that in together with a celebration of "transness". I had a provisional agreement from the local trans rock group 'Hunting Hearts' that they would perform and also got an agreement with a gender-fluid singer and a beautiful choir.

Still, I was unable to provide them with a guarantee of safety, so in the end, that idea was shelved. I then received a tentative response from the local anti-fascists that they may work with me, but then sadly Rosie Duffield put her big foot in it with her cervix statement, and as a Labour Party member (a party that they understandably consider transphobic), it then looked like they would refuse to work with me.

I was very concerned about this because, for my safety, I needed considerable support. Portsmouth has its fair share of transphobic and homophobic people - a classic example being the guy that attacked Owen Jones was a city resident. As we all know, trans women are very highly targeted. The breakthrough with the local antifascists came at the vigil for Sabina Nessa, where by coincidence, I met with some of their members. We got on well, and from that moment, we worked together.

The next group that joined were the academics from Portsmouth University. They reached out at a national GIN (Gender Inclusion Network) meeting, making the connection of three groups. We all knew the students at the university would turn up, but because many had not arrived back from the summer break, there was no contact. I heard a rumour that a fifth group was coming just days before the event, but they were never identified.

Weeks before the FiLiA conference, I had reached out to Amnesty International, who supported our event (called Fly the Flag), supplying two different design placards, badges, stickers and a pocket guide called "Gender Identity for Beginners". They also very kindly redesigned one of my flyers for me.

Then the big day - Saturday 16th of October, but not before two "heavy" warnings on Friday from national trans groups/charities telling me that violence and had to be avoided at all costs.

This was always the significant risk at the FiLiA event and indeed the concern of FiLiA themselves. I had pre-emptied this possibility with emails to Hampshire Police, who, I must say, were amazingly supportive throughout.

Saturday arrived, and the first surprise was that a young FiLiA volunteer arriving early (assumably for induction) smiled, rushed up to me and gave me a hug!

Shocked (I still dont know who she was), she said, "have a lovely day", and was gone in an instant. A GC follower of mine on Twitter? Mistaken identity? I dont know.

On the day, it became was clear there were different strategies from those in the stakeholder group. I and the uni academics took the opposite view and leafleted the queue. At that point, the students were still in bed!

FiLiA had arranged for a singing group (they were excellent), and the atmosphere was very positive. About 15 - 20% of those offered a leaflet took one. Yes, I got a "bugger off" from one lady possibly in her thirties, but equally, another gave up her place in the queue to come back and talk to me, saying, "I really dont hate you - I hope you are ok".

I was never misgendered; everyone (baring that one "bugger off" comment) was either friendly or at least civil. I noticed Maya F in the queue, who very politely said that one of my blogs was incorrect. In fairness, given the toxicity of the trans debate, I certainly have no complaints.

The only other incident to note was that one lesbian trans ally from the uni team who was helping me distribute leaflets had "words" with a lesbian who had opposite views and who had started shouting at her. The GC lady was determined to talk about penises!

Their, "row" was witnessed by a senior man from Portsmouth City Council.

Trans speeches followed later in the morning. Both the Lib Dems and Labour councillors had to pull out (all parties ceased campaigning because of the murder of Sir David Amess), but in some ways, that was good because my speech was way too long.

In fact, in the end, I even skipped a page!

You can read my entire speech by clicking here, I am sure FiLiA will want to know if I slandered them.

At lunchtime, things started to heat up. One lady walked out, saying she was going home, my impression being she had talked to some FiLiA members who held transphobic views to which she disagreed. We swapped telephone numbers, and she has already text me. A story for another day, perhaps.

Then one of my GC followers came and talked to me, bringing her daughter with her. Mum said hello, and then left us to talk with the daughter who is at Uni in the west country, with her saying she "felt like she had crossed a picket line" and did not want to be at the FiLiA event. I explained my cause, and she was off to convert her mum. Trans rights are indeed human rights.

I had a few chats with other FiLiA members; all were good. I know some trans people disagree with me talking to GC people, but I do, and I am not going to stop.

No debate is wrong - Stonewall, take note. Not that they are known feminists, nor do I think their umbrella is at all useful.

During the day, while FiLiA members were in the Guildhall, we chatted to each other and spoke to members of the public - more allies to the trans cause!

Music played, the guitarist was strumming, we were singing all seemed good.

I tweeted out much the same, not knowing that a small group had arrived sitting at the far end of the Guildhall steps. It would appear they were responsible for writing offensive signs using chalk that had been left around. The problem is if people are determined to make trouble how do you stop them?

Further, the question is WHY make trouble?

What was the motive to offend?

The GC of course blamed the trans camp. Some on the trans side suggest the GC did it so to cause uproar. We certainly know there were setups both at the protest event both in London and Manchester.

I was a bit like a rabbit caught in a cars headlamp, I did not know how, who or why but checking with the excellent Police Liason Officers, they confirmed what had happened was done by people outside the known stakeholder's groups.

I sent a message to FiLiA leaders condemning what had occurred, but I am uncertain if they got it, and on reflection, we needed better communication with FiLiA. I would also suggest to trans activists that going forward, we take images of signs and placards and load them on a website to confirm what has been approved by stakeholders before the start of any event.

Even consider body cams - yep, you honestly need eyes in the back of your head!

Basically, it takes just one person to cause controversy.

Rossie Duffield, with her cervix comment, for example, upsetting trans men, trans women, intersex folks, not to forget some women who have had a complete hysterectomy. The one LGB Alliance guy at the Manchester Pride trans support event - and amazingly just a few days ago, a Tory Portsmouth City Councilor who voted against a motion condemning conversion therapy.

Sunday morning continued with me having discussions outside the hall with various very well-known gender-critical women. One, kindly bought me a coffee, which I desperately needed. Thank you Helen!

Our original plan was to leaflet the FiLiA attendees for a second day, but by coincidence, the 'Great South Run' was taking place, so we leafleted participants and those attending the run instead. In total, between the four stakeholders, we distributed thousands of leaflets, hopefully making hundreds, perhaps thousands of trans allies. That's the positive.

The stress of organising an event is immense, and yes, I got a bit emotional come Sunday lunchtime.

The FiLiA conference was billed as the biggest feminist conference in Europe, and as a community, we need to do so much better - come next year; hopefully, GIN will be up and fully running, and trans activism will be more organised.

The goal was for FiLiA to have their conference without a violent incident, and this was achieved.

Would we at Steph's Place campaign at a G C event again?

This is not a matter of single-sex spaces, we at Steph's Place concur with the Equality Act - we all need safe spaces at times. This is a matter of conflating the EA with the GRA, which is simply wrong.

FiLiA is an outstanding feminist organisation that does some fantastic work. As a feminist I would have loved to have been in that hall. My understanding is that they did not talk that much about the 'gender war'.

But sadly FiLiA has lost its way regarding human rights.

They were (and still are) in a good position to help end the gender war because this is a feminist war that only feminists can resolve before placing ideas and agreements to the dithering, fence-sitting, politicians.

The truth is the war currently works for politicians (mainly men).  Because we seem to be constantly scraping with each other when in reality, we should be holding them to account.

As we started to pack up, we swept the site for offensive signs; there were none.

The truth is the vast majority of attendees were very polite, and some very friendly. I doubt very much if all the members are GC and are sure most of FiLiA members want to end the gender war - for sure I am sick of it.

The local antifascists kept to their word; they kept me safe and looked after me exceedingly well.

I am truly grateful to them and as it happens I share all their left-wing aims.

And then the goodbye's thanking everyone for their support.

My final goodbye was to Dave the gay man, the very first to work with me regarding the FiLiA event.

He gave me one of my flyers "a woman asked me to give you this" - the image is at the top of this page.

Whoever you are, a huge massive 'thank you' - and yes, once I got in the car tears did flow for a second time - there are decent people on this earth and for that, I am truly grateful.

And today as I write this blog no doubt Twitter is going loopy with something else to shout about but for me a rest. So social media is out for a spell, apologies that I am not replying to tweets but I suspect I know what is best.