Late last week, following the debate in parliament about GRA Reform in England and superficially positive comments from the UK Government representative, we wrote an open letter to Minister Mike Freer at the UK Government Equalities Office. 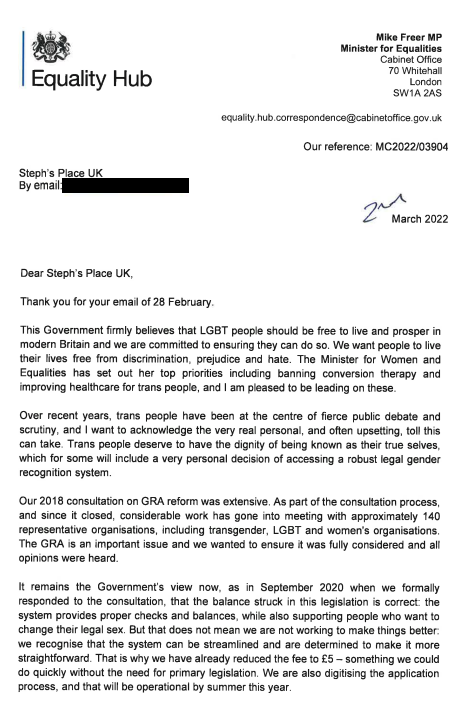 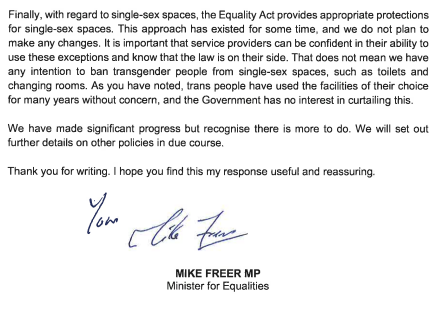 The first read looks like the usual attempt to brush aside the community and issues facing the UK trans community while promoting the Government’s appalling record in this area -  and frankly, this is pretty much exactly what we expected when we sent it.

Was it pointless to do so?

Not from our perspective.

As we see it, what we are doing is currently holding the line against a veritable tidal wave of trans hostile activity across Government and media.

And that we are successfully doing so in this toxic, hostile environment is a testament to the work of every trans person involved across the board in the UK, from open direct activism to behind the scenes politicking. Any improvement, no matter how small, represents a significant win in this environment.

Let’s take a deeper look because there are some interesting nuggets of information contained within the response from Minister Freer.

(Emphasis from this point all ours here at Steph’s Place.)

What did we find?

The following are extracts and analyses from Minister Freer’s response.

‘The Minister for Women and Equalities has set out her top priorities, including banning conversion therapy and improving healthcare for trans people, and I am pleased to be leading on these.’

First off, and in a move sure to enrage trans hostile activists everywhere, we have confirmation in writing that trans people will be covered by the ban on Conversion Therapy, backing up previous comments by various ministers, including Truss.

Obviously, we don’t know exactly what form this will take, but any attempt to loophole or backdoor trans exclusion in the ban will show this as a blatant attempt at misinformation. It also firmly leaves the EHRC’s recent letter insisting trans people be excluded from the ban out in the cold as an outlier from an organisation clearly gone rogue.

There also appears to be a commitment to further improvements on gender-affirming healthcare - something that will be welcome across the board, as even a minor improvement is better than nothing.

Does it mean we will stop working towards active, transformative change? Of course not.

Let’s take the following extracts and look at them as one - and it’s a mixed bag.

‘Trans people deserve to have the dignity of being known as their true selves, which for some will include a very personal decision of accessing a robust legal gender recognition system.’

‘The system provides proper checks and balances, while also supporting people who want to change their legal sex. But that does not mean we are not working to make things better: we recognise that the system can be streamlined and are determined to make it more straightforward.’

Lets start with the negative, as there’s a few  things that jump out here which confirm what we already knew / suspected.

The first is that the Government has absolutely no intention of recognising non-binary identities, continuing to frame legal recognition as bound within the constraints of a false binary system under the phrasing ‘legal sex’. This is reinforced by stating that legal recognition is only applicable to some (binary) transgender people.

Let’s be clear. This is in complete contravention to the fundamental human right to self-determination, and restricting legal recognition in this way is little more than state control and approval over a transgender person’s identity - something which is incompatible with human rights.

There’s also the inclusion of the dog whistle phrasing ‘robust’ and ‘checks and balances.

The Government has never elaborated on just why it needs to be 'robust', and what the ‘checks and balances’ are exactly, or what they are designed to achieve. Something we will be asking, I think.

OK, so what about the positives?

In among the self-congratulatory ‘we made it a fiver and put it online!’ spiel there's this:

‘But that does not mean we are not working to make things better: we recognise that the system can be streamlined and are determined to make it more straightforward.’

This is interesting, but we probably won’t know exactly what this means for another week or two as it’s likely going to be contained in the Government Equalities Office response to the Women & Equalities Select Committee GRA Enquiry. The WESC report on GRA Reform was published on 21st December 2021, and the GEO have 12 weeks in which to respond - which ends on 15th March 2021.

‘Finally, with regard to single-sex spaces, the Equality Act provides appropriate protections for single-sex spaces. This approach has existed for some time, and we do not plan to make any changes.’

We again have confirmation in writing here of the comments made in the GRA Debate on the 21st Feb 2021.

But what about the associated guidance? That’s still muddled, and has both positive and potentially negative indications.

It’s worth noting that Minister Freer avoided mentioning guidance specifically, so this from the Government should be taken with a huge pinch of salt, as actions speak far louder than words.

‘lt is important that service providers can be confident in their ability to use these exceptions and know that the law is on their side. That does not mean we have any intention to ban transgender people from single-sex spaces, such as toilets and changing rooms. As you have noted, trans people have used the facilities of their choice for many years without concern, and the Government has no interest in curtailing this.’

We again have in writing that the Government do not intend to ban trans people from toilets and changing rooms, nor are they interested in doing so. This is a pretty firm line, a welcome one, a big positive for the trans community and one in the eye for the trans hostile activists.

What about potential negatives? Unfortunately, there’s a few.

First off the use of ‘intention’. We all know things can be changed and phrased in such a way that ‘intention’ goes straight out of the window. I mean, did they intend to put a trans hostile activist who appears to be working hand in hand with extremist groups in charge of the EHRC, was that a fortunate coincidence or did Falkner just go rogue?

Implementation of GRA 2004 is a good example of intent going massively wrong if you spend more than 2 minutes talking to either Christine Burns and Stephen Whittle. What is in place now has been twisted beyond recognition from the original intent back in 2004.

So it’s still entirely possible that any new guidance, while not apparently intending to do so, may still in effect ban trans people from gender appropriate spaces.

It’s something we won't know until it comes out of the woodwork, but it’s fair to say that if the EHRC are involved in any capacity then we know what the ‘intent’ was likely to be.

There are also three glaring omissions, which is rather telling.

There’s no mention of hospital wards, prisons or sports - all areas full of trans hostile misinformation and activity within political circles, and we have suspicions that further restrictions may be introduced in these areas despite there being no actual evidence of problems existing.

We do know from our own work here at Steph’s Place that NHS Trusts havent experienced issues regarding single sex wards, and that since revising the processes in 2019 following the risk assessment failures around Karen White, the Ministry of Justice processes around prison housing seems to be working well. As to sport, well the IOC seem to have that firmly in hand, as does British Cycling.

Ending on a positive.

Freer finishes with the line :

‘We have made significant progress but recognise there is more to do. We will set out further details on other policies in due course.’

This in itself is a pretty clear indication that further changes will be forthcoming. As mentioned earlier, it will likely be contained within the response from the Government Equalities Office to the Women & Equalities Select Committee. What those changes might be is anyone’s guess.

But let’s be honest with ourselves.

They’re likely to be minimal, superficial, and simply tinkering around the edges to avoid actual reform, but all may change depending on GRA Reform in Scotland and how that progresses. That in itself could be a massive spanner in the Government’s plans to do next to nothing while appearing to do something.

As ever - we fight on, and we will be writing back to Minister Freer in due course.