Has the reduced fee made much difference? 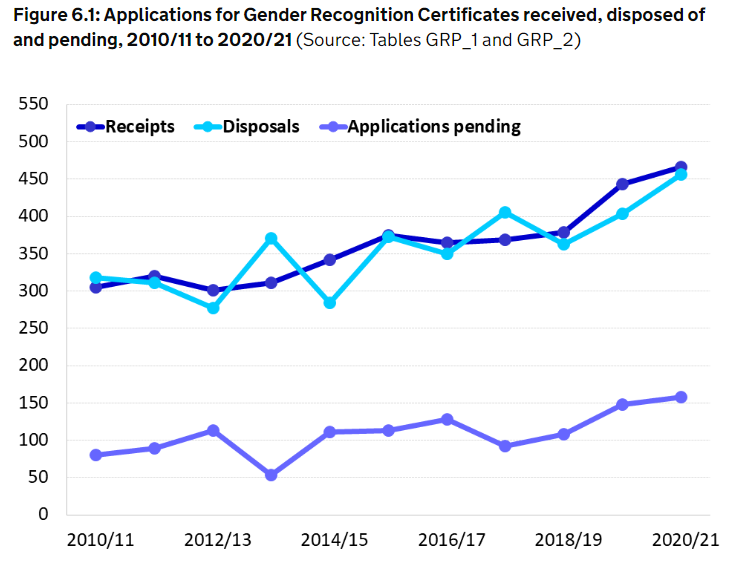 On the 9th of December, the Ministry of Justice reported the latest stats regarding Gender Recognition Certificates (GRC) applications.

This was significant because, for the first time, we had a full three months worth of stats that reflected the reduction in cost to apply for a GRC - down from £140 to just £5. At first sight, the drop looks pretty fair, but in reality, the actual cost of applying for a GRC is much more significant in terms of time, effort, and expenses of third party reports etc. Moreover, the GRA was very much designed for those transitioning via the NHS - those self-medicating or going private have very significant issues in even being able to apply - myself included.

I feel very aggrieved that despite me being on hormones for some ten years and having had lower surgery, I do not tick all the right boxes purely because my physc, who BUPA recognises as an expert - is not recognised by the MOJ.

A GRC is undoubtedly not necessary to live our own lives in our gender choice, and yes, to get a "female" marked passport and driving licence was not too much hassle.

This fact proves the gender war is false - what better ID is there than a passport?

But a travel document and driving licence is not quite the same as the state recognising you as "male" or "female". And no, there is no other option for our non-binary siblings.

Section 9 of the GRA reads;

Personally, a GRC is important to me - when I leave this world in every aspect, I want to be known as being female - the sex I should have been born with. A GRC does not wipe out history - nothing is backdated - it just makes things "right".

Not a big ask.

But when the government of the day under Theresa May suggested making the GRC process easier, all hell broke loose from Gender Critical organisations like FiLiA, Womens Place UK and Fair Play for Women.

Just what "right" they have to affect MY (and my trans siblings) birth certificate, I dont know, but they certainly made things difficult by objecting to Self-ID.

It is important to note that a GRC does not give a right to single-sex spaces nor even a right to a specific estate if you are locked up in prison. The MOJ/HMPPS has the right to hold trans women with a GRC in the male estate.

Tip: ...don't go to prison it is truly shit both for women and in particular trans women. Fortunately, there are not too many trans folk in prison - just 197 out of a total prison population of 77,416.

So how many people applied for a GRC in the quarter ending September 2021?

Well, yes, the figure went up; applications received rose to 222, an increase of 73 compared to July to September 2020. However, just 105 full certificates were granted in the quarter ending September 21 - in total, some 350 applications from previous months are pending.

But looking at the stats more realistically, out of a population of 56 million people in England and Wales, 222 applications represent just 0.00039%.

Or put another way, just one person in every 252,252 applied for a Gender Recognition Certificate.

Less than one in a quarter of a million!

Yet these big gender-critical groups justify a gender war?

And at the cost to women.