How I finally got rid of my Fungal Nail Problem 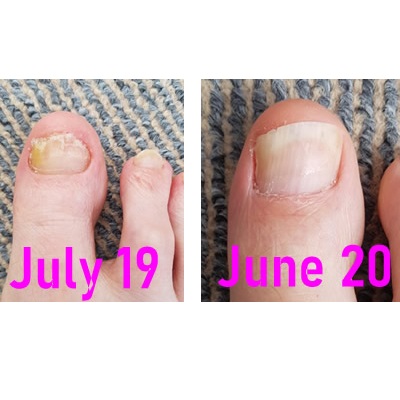 You can be forgiven by wondering why a trans rights website is writing about fungal nail infection. So let me declare the motive behind my thinking here.

Getting shot of a fungal nail is impossible - or so I was told by a highly qualified podiatrist a couple of years ago. Yes, your GP can prescribe pills for fungal nail infections, but a friend who took them became very seriously ill because of the side effects. Doing my research, I found out this is very common. One other warning, I had another friend who went down the fungal nail reconstruction route, which was an utter disaster.

Now I am pretty confident millions of women (and some men) are looking for a cure for their fungal nail problem. So, if I can draw these folks to this website and also get them interested in trans rights, which are, of course, human rights as well as helping with a fungal nail, that works for me perfectly.

As a trans woman, I love summertime. But for several years, I had not been able to wear sandals because of a nasty horrible yellow fungal nail infection on my big toe.  To be exact, this is a re-occurrence, as about ten years ago I had the same problem. At that time, I had the nail lasered, and it worked pretty well for a few years. But the infection came back with a vengeance because I was not aware you never completely get rid of fungal nail spores, so the best you can do is a 99% cure and then take action to maintain the result.

And here I have succeeded as the two images on the pic prove, and yes, I can paint my toenails now and in no way does that affect the maintenance treatment or mean the infection will get worse.

So how did I get rid of my fungal nail infection? –  the answer is by multi procedures.

Fungal nail hates the light, so I started by having the nail lasered again. The first time I had my fungal nails lasered, it was not painful, but this time I went to a different clinic, and it was 'iron hot' agony - so be prepared.

I also started taking vitamin D supplements which aids nail growth and a supplement that many people should take, especially in the winter. Be careful here though; I believe it is possible to overdose on these supplements, so get some professional advice first.

Getting rid of the fungal nail spores is critical too, so get an old toothbrush and when you bath or shower give the nail a quick scrub. I own a UV nail box, so every night, just before going to bed, another quick blast of light starts to put the infection on the defensive. In the day give the nail as much light as possible and try to avoid sweaty foot conditions. Wash socks and tights (pantyhose) at sixty degrees or more, and every month or so spray the inside of your shoes with an athlete's foot spray containing Tolnaftate or a similar.

You may have picked up on-line that Vicks Vapour rub gets rid of fungal nail and in my case, it certainly helped by smearing some on the nail in the morning before putting on socks or tights. But I also use Vick in conjunction with Emtrix, which my chiropodist recommended. So at night just before going to bed, I apply a quick dab of Emtrix on the damaged nail, making sure I let it dry before poping between the sheets.

All that may sound a lot of work, but in reality, we are talking seconds for each treatment, and I found all these treatments worked very well for me.

I do not know why Vicks Vapour rub helps get rid of a fungal nail, but the contents include cedar leaf oil, nutmeg oil, petrolatum, thymol and turpentine oil. There seems to be a lot of different oils in Vicks Vapour Rub. Is this the reason?  I don't know.

Emtrix, on the other hand, is a designated fungal nail treatment cream though, in reality, it appears very much as a liquid. Emtrix has excellent reviews on Amazon, and while I tend to get a bit sceptical about some Amazon reviews, I can vouch for Emtrix personally. However, my chiropodist warned me not to expect Emptrix to work independently, and my results do back up his opinion.

But then comes the final ‘must-do’ treatment, which I started once all the soft and brittle nail had broken away. I found that this happened after about six months after commencing with the Vicks Vapour Rub & Emtrix treatment but time will vary depending on how bad the fungal nail (or nails) are.

It is a medicated lacquer called ‘Amorolfine’ which I bought on-line from a pharmacy. They did ask me to email them an image of my fungal nail, but it was apparent what the nail was like so three packs arrived in the post a few days after. The treatment I used was Amorolfine 5% Medicated Nail Lacquer made by Zentiva.

The good news is that Amorolfine is scientifically proven to work in a high percentage of fungal nail cases and you can put nail varnish on top of the lacquer (which has a slight shine in its own right), and it does not interfere with the lacquer working. Better still, it is a quick application once a week.

Keep the nail clean, get it initially lasered, take vitamin D supplements, open the nail up to as much daylight and UV light as possible. Don’t forget the Vicks Vapour Rub, Emtrix at least every other day and in the final months' apply Amorolfine.

Good luck with clearing your fungal nail infection, and I hope what worked for me will also work for you.

This article is now nearly three years old - so on the 19th of March 2022 I thought I would update it a bit - and I am pleased to say all my toenails are still very healthy, but I will never give up on preventative treatments.

One quick note. If you found this article via a search engine and are not transgender, could I ask you to explore this website a bit more?

We need people like you to understand trans folk are just ordinary people who want to live in peace. Our human rights are being rollbacked, and the UK media, especially The Times, Daily Telegraph & Daily Mail, are very "trans hostile" - we are discriminated against. Thank you for your support!