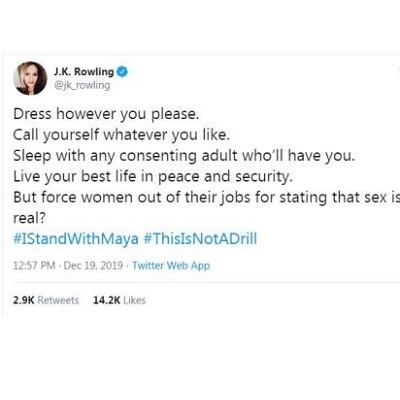 I got up unusually early today. Last night I got a message from my website developer to tell me that my site would go live within 48 hours, and he recommended that I polished up my SEO.

As usual, the first thing I do in the mornings is to check out the BBC website for the latest news. My eyes immediately went to one story, and two words hit me; ‘Rowling’ and ‘Trans’.

I had heard many times about J K Rowlings controversial and somewhat confusing statements on trans affairs. Still, not being the least interested in Harry Potter or celebrities, I would admit anything she has said in the past is well off my radar.

But with the launch of my website, I felt I had to have a look at what she was saying.

And I was left with a feeling of emptiness.

My wife gets up for our early morning walk at six, and as I walked, I was exceptionally quiet.

Inside I was crying.

JKR alleges, a cis man once attacked her. It was later revealed it was a domestic dispute but she uses this (or these) incidents to validate making trans women's lives even more difficult.

Whatever the truth of her violent past, I don’t understand why that has anything to do with trans women going to the loo!

I have been attacked four times.  Three times by a man and once by a woman; but I don't hold that against cis men or cis women.

So all of J K Rowling's words seem shallow to me. She has also said, “I know and love trans people”.  If you do Jo...why make our lives harder?

J K Rowling is a feminist, and that is fine by me, but any respect she has earnt in relation to her success has gone right out my window because men don’t invade women's places to attack you, or indeed me. This is a figment of her vivid imagination - which in the past has earnt her many millions of pounds.

Men will attack women almost anywhere, and by far the most common location is (if you care to look at the statistics), in the home!

Her reasons for being anti-trans are just plain wrong to the point that we should not even attempt a response, as to do so gives some credibility to her ridiculous arguments.

It appears that Joanne Rolling believes men can just change sex/gender at a flick of a button.

If you read 'My Story' on this website, it proves that is NOT the case.

So, as there is a 'social war on'...let me describe say what I think of the TERF/TEA arguments and if J K Rolling classes herself as a TERF, TEA or 'Gender-Critical' (if you prefer the posh label) then I hope she is listening.