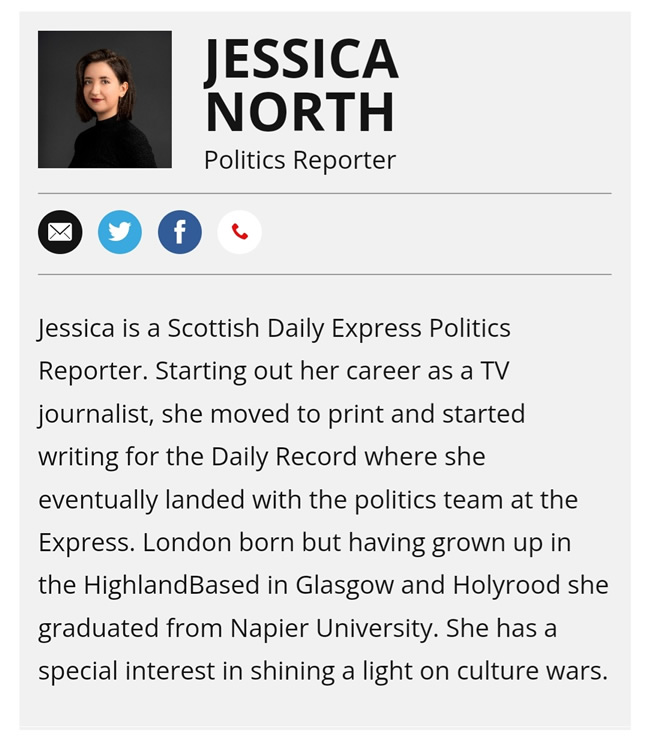 Jessica North is the Politics Reporter at the Scottish Daily Express (SDE).

Her bio at the Scottish Daily Express reads:

Jessica is a Scottish Daily Express Politics Reporter. "Starting out her career as a TV journalist, she moved to print and started writing for the Daily Record where she eventually landed with the politics team at the Express. London born but having grown up in the HighlandBased in Glasgow and Holyrood she graduated from Napier University. She has a special interest in shining a light on culture wars".

If you think that bio doesn't read great - it's probably down to the fact that it would appear that punctuation is missing after "Record" and "Holyrood" - such is the level of journalism in the UK!

Oh, and "HighlandBased" - umm, that dont make sense either.

Anyway... none of us is perfect, so let's look at Jessica's North's "shining a light on the culture war".

One would expect that journalists would at least attempt to be neutral in writing stories and that, on Twitter, they would follow a multitude of stakeholders from both sides of "the trans debate" (I will return to that later).

This would appear not to be the case with Jessica North, though, who, when I checked (yes, I have screenshots), followed hundreds of trans-hostile people and organisations.

In fact, when I checked, Jessica was following 1247 Twitter accounts, but we had a shared interest in just a handful which, as a reasonably high-profile trans human rights organisation, seems very weird.

Unless, perhaps, you want to produce biased reporting?

Jessica follows all the prominent trans-hostile celebrities, including Forstater, Rowling, Stock, Bailey, Esses, Clark, Cherry, Sullivan, Walsh and many others too numerous to mention, along with alleged trans hate groups LGB Alliance. Did I say alleged? In Ireland and Australia, they have been named a hate group. Others included Women's Place UK, Scottish Feminist Network and UnHerd, all known to be highly trans-hostile organisations.

Indeed, if you want to know all the trans-hostile groups, some of whom campaign against other human rights, Jessica can provide quite a list.

Not surprisingly, people who follow Jessica are also known as "gender-criticals" some of whom have been accused at some point of hate speech or being transphobic, in other words, prejudice against trans people

People and organisations who follow Jessica include Allice Sulivan from UCL, known for her detest of the LGBT organisation Stonewall, Jon Pike, a trans-hostile writer, and For Women Scotland, who have probably been called transphobic more times than I could count.

Jessica has been on "my radar" for some time, calling people like me a "trans activist troll" - at seventy years of age and someone with a proven record of fighting for women, that is one hell of a slur.

Indeed, Jessica North likes to produce a massive number of stories that are, well, let's suggest are, "unbalanced".

For example, let's look at her story dated the 23rd of February 2022, with the headline "The Gender Recognition Act: Controversial women's rights debate explained".

Jessica North starts the article with these words:

The controversy surrounding the Gender Recognition Act has reached a boiling point, globally and in Scotland, with many describing the legislation as a more prominent issue than Scottish Independence.

This statement is, frankly, hyperbole (can I say bollocks?).

Numerous countries are changing legal gender laws - Germany, for instance, where the system will almost certainly change to Self-ID with the vast majority of political parties in agreement. And who cares about Self-ID in Scotland? Frankly, not many.

Jessica's story fails to point out that just 2% of trans people have been able to secure a Gender Recognition Certificate (GRC) because the conditions of The Gender Recognition Act are so challenging - and that Self-ID (the system proposed in Scotland) is operational in over 17 countries with a total population of some 800 million people.

Did Jessica North's story publish evidence from these countries (that include Pakistan, Argentina and Ireland) if the system works?

The answer is NO.

Jessica North goes on a tirade advocating for trans-hostile groups, Fair Play For Women (whom we have questioned if they are a hate group), For Women Scotland and LGB Alliance.

North, totally fails to mention the legal consequences if a person makes a false statement when applying for a GRC.

The penalty? Up to two years in prison and an unlimited (yes, unlimited) fine!

In fact, I could write a thousand words debunking, adding or correcting this Jessica North article; the same applies to virtually every piece she writes.

I don't know if Jessica North is a transphobe, but for sure, neither her articles nor those she follows on Twitter gives me any confidence but come to that, the Scottish Daily Express doesn't give me any confidence either.

Do they care about human rights or clicks?

And I note that on their website, they classify the numerous stories under the title "trans debate".

Would they use the sub-heading of the "women debate"?

Or how about the "Jewish debate"?

Or how about full-on racist the "black debate"?

Frankly, this newspaper is, in my opinion, despicable, transphobic (meaning prejudiced against trans people) and should cease publication.

Because in my view, The Scottish Daily Express, along with many other right-wing newspapers, are responsible for the massive increase in trans hate crime, which has risen 56% in just one year.

And if you think that's just a one-off figure, perhaps look at the stats and note that over the last few years hate crime against the trans community has risen by over 1000%. And there is a direct correlation between the number of newspaper reports that directly or indirectly attack trans people and hate crimes.

So if by any chance your company advertises in the Scottish Daily Express, I would ask you to think again.

If we don't have human rights, we have nothing.