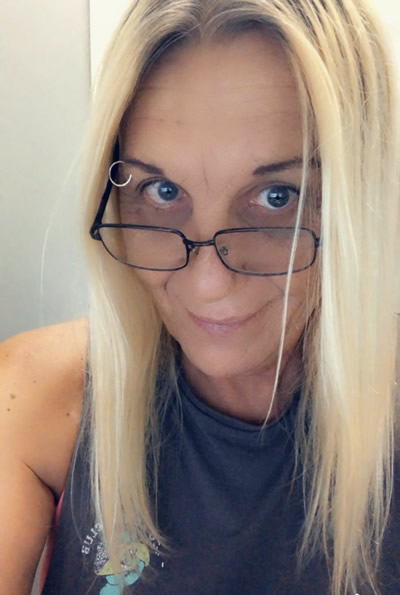 It was a Saturday morning, and at last, I was to zoom with Kirsti Miller. Circumstances had forced a postponement on two previous occasions, and once Kirsti arrived for our Zoom meeting a day too early! But we both knew it was going to happen, and we were both excited. Kirsti has a story to tell - and oh my goodness… what a story!

Now aged 56 - we were actually zooming on her birthday, Kirsti sprung from the zoom waiting room exactly as I anticipated - hot, thanks to the Australian summer, long blond hair, with "AUSSIE" proudly printed on her vest top. I was quickly introduced to Nikki, Kirsti's partner and also to some of their nineteen pets, mainly cats but three dogs as well. "They are part of the family Steph" said Kirsti, "everyone is like our own kid." As we fervently chatted, I quickly noticed that I was not taking too many notes - I was entranced with Kirsti's story to the point of being shell shocked. I had already been given some background information on Kirsti by one of her Twitter followers saying:-

I don't know how much info you have on the whole trans women's involvement in Sports issue, so please forgive me. But from your question to Kirsti asking how many trans athletes have qualified for the Olympics (which is none) - I am assuming that your involvement in this area to date has been low.

If that is true, then you have hit gold finding Kirsti. And the reason I say this is she is living proof of how hormone treatment to reduce testosterone levels in trans women athletes removes the male advantages of puberty - as a teenager, and pre-transition.

Kirsti was a world-class athlete, breaking state swimming records and was Australian U16 Aquathon Champion. She then progressed into the Modern Pentathlon representing Australia in both Junior and then Senior Modern Pentathlon World Championships, which combines swimming, show jumping, fencing, pistol shooting and cross country running. Kirsti was the youngest Australian competitor ever selected to represent her country at Junior level - suffice to say she was a highly talented athlete in many sporting events, pre-transition. Kirsti has explained how once she had transitioned, and her testosterone levels had been reduced, she completely lost her ability to compete with women at anything like the levels she had competed with pre-transition against men. She was no longer able to compete in any of those sports against women.

She is living proof that there is NO advantage, and she is highly knowledgeable in the science behind the medication and effects it has on the body - even though some claim that reducing testosterone has no effect on muscle mass and bone structure developed during male puberty. Kirsti describes it akin to running a Formula 1 racing car on unleaded petrol - you may have a superior model, but without the right fuel it simply cannot perform at anything like its optimum level, and this is why trans women are not winning medals, not dominating women's sport, and have so far failed to have even one single trans women qualify for any sport in the Olympics.

Kirsti now plays football but has never been able to compete at any level in any sport close to her pre-transitioning levels - so if you are looking for someone to showcase in this area, she really is someone who should be talking to.

So, there was I - talking to Kirsti Miller, an exceedingly gifted human being that found elite level sport - dare I say relatively easy?

Well, no, it was not easy - Kirsti trained very hard in part because he (and I change pronouns now because at the time Kirsti was Warren) wanted to be the best but also sport was being used as "cover" to being trans. I have given up counting how many times I have heard that trans folk (who go on and transition) knew there was something "different" about them from an early age. In Warren, it was at about four years of age. I have also given up how many times I have heard the story of pre-transition trans women, taking on tough challenges in life basically to prove to themselves they are "men." Kirsti admits exactly that, but in Warren's case - he could not even bear to look his muscular body either - not even after competitive swimming events quickly throwing on his T-shirt to hide his muscles. Kirsti's story has been told before in Australia telling the Sydney based Daily Telegraph in 2016:

"I was a good sportsman, a first-grade rugby league player for Wagga Wagga, and I represented Australia in modern pentathlon, I was also a good boxer. I trained hard and competed hard. I thought it would make the girl inside me go away. I know a lot of transgender girls who did the same thing. It is ironic, that some of the toughest men you see might be girls on the inside, trying to overcompensate".

Kirsti certainly did overcompensate - not satisfied with being a tough sportsman at the age of twenty-four he joined the prison service looking after some of Australia's roughest and toughest criminals. He had also got married to a woman he obviously loved – becoming the dad to three beautiful daughters. Eventually, though there is no option but to be your true self - and for Warren that was in 1999 - when he finally told his wife he felt he was trans. By this time Warren had risen through the ranks to become a prison Governor and less than a year later he walked into work - dressed as a woman, saying “My name is now Kirsti Miller, and you’ll find me in my office".

From that point, Kirsti's life became a rollercoaster of highs and lows. She travelled to Thailand to have facial and breast augmentation surgery in 2004 - returning for full surgery to create a vagina in 2006. This time she decided to make a holiday of it - discharging herself from hospital three days after surgery, hiring and riding a motorbike and then riding an Elephant a day later. Her sex change surgery changed things, though.

Australian law did not allow same-sex marriages, and Kirstie was forced into divorce even though her wife had supported her throughout the transition.

But life was about to take a significant downturn. From having a stable relationship and job she became homeless. She had a spell of eighteen months sleeping rough in Sydney’s busy streets and became involved in sex work and drugs. "You get to the point of being so low Steph, that someone sticking a needle in your arm becomes an answer," Kirsti told me. I could only sit back and think that everyone on the streets would also think that way.

Life then got even worse when Kirsti learnt that her daughter had lost her baby - stillborn at birth. So, to attend the funeral she travelled to Broken Hill located some five-hundred kilometres northeast of Adelaide. She arrived without any money and sought help from the Salvation Army - initially being refused - because she was trans. The officer in charge offered Kirsti one thousand dollars to go away - but Kirsti decided to tough it out. Eventually, she was offered a temporary home - the Salvation Army officer becoming Kirsti's first success in making a trans ally.

As a trans woman, Kirsti was not accepted in all of the community. Broken Hill was a transphobic union-controlled city - but with a tiny population of just 17,000, pretty much everyone knew everyone else. Slowly, Kirsti started to get on her feet and began work as a fulltime taxi driver making it her business to "convert" people to become trans allies as they got in her taxi. She met Nikki, an exceptionally talented sportswoman who played soccer for South Australia and later Australia forming a strong loving relationship that holds firm to this day.

But life has still not been easy. In 2013 disaster struck thanks to a game of football. Playing for South Broken Hill, the rivalry with the North Broken Hill team was immense. Kirsti was abused by many of the North's team for being a trans woman and more to the point their supporters. The result was that for four years, neither Kirsti nor Nikki could play sport "blackballed" by the local union and transphobes in an attempt to drive them out of town. Their home was attacked, windows broken, and they were robbed. But neither Kirsti nor Nikki would give way and eventually in 2017 both were "accepted" back into Broken Hill society and their sporting careers re-instated.

Changed from a homophobic and transphobic union-controlled mining town to one that accepted love and diversity. Changed from looking backwards to one that looks forward. Changed in many ways thanks to Kirsti Miller.

The Broken Heel Festival had launched - a celebration of everything LGBT+ and described as "a celebration of drag, divas and disco in the desert. Broken Hill had its own pride event, and it was huge - with some people travelling from across Australia to attend. Not a one-day event but spread over a week for some people came days before and stayed days after the official event dates. And every year the event gets bigger.

But what of Kirsti?

Just four years off her sixtieth birthday Kirsti still plays competitive football, can still run and jump. Her best years in sport a memory - but her devotion to sport unwavering. Her life is now dedicated to other trans folk - and in particular to those wanting to play sport. Kirsti is a world expert in understanding the physical effects of transitioning trans sports-women and men.

Kirsti knows trans people are badly disadvantaged in sport, not advantaged as many people claim. And she is going to do her darndest to get change because fairness matters. But it is because of people like Kirsti that trans kids have access to sport, and whilst there is still much work to do - progress has been made.

Kirsti Miller broke the barriers in Broken Hill and goodness knows what barriers she will break down next.  Kirsti can genuinely claim she done it and wears the T-shirt.

And on that T-Shirt standing strong is one proud word - “AUSSIE”.