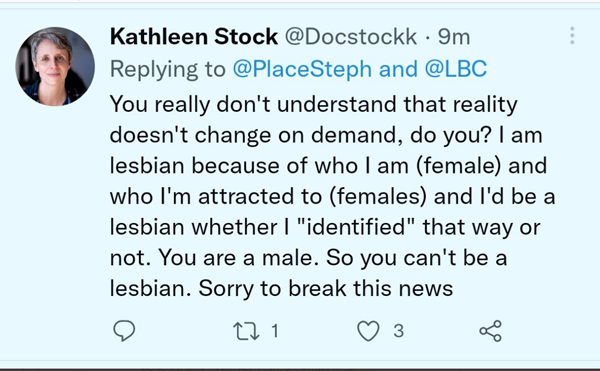 Ok, I was born with some wrong bits - that's life.

I know for a fact that 99% of us would want to change our bodies one way or another. My other half often moans about her thin lips, her chin and the shape of her nose - that she is too short, has big hips and short legs.

For all her personal perceived negativity, the simple fact is I love her very much - in my eyes; she is truly beautiful.

Love is an innate belief - "knowing" someone is special.

Prince Charles once came out with a famous quote, "whatever love is", and given he was sat next to his future bride and one of the most beautiful and remarkable woman on the planet, he was roundly criticised for it.

But how can you put "love" into words?

We cant see sexuality either - some guys fancy guys, some gals fancy gals - dont like it? Get over it; that's fine.

We all know what is "right" for us as human beings.

And that is what gender is - something that is "right".

I know despite my biology, there is something more important than those dangly bits, which, thanks to the surgeon's knife, were last seen floating off the Isle of Wight.

Gender is my (and your) belief in your "rightful" sex.

Some will say they don't have a gender, which is not surprising because their sex and gender align. It is sometimes challenging to explain to these folk that there is something more important than biology.

Some aspects of life surpass words.

My gender is a woman.

I dont need some fancy biologist saying things about me and other trans folks that they don't know.

Yesterday, Kathleen Stock tweeted to me (but subsequently deleted), "You are a male."

Prove it - and in any case, why does it matter? And indeed, why be so harsh on another human being that has travelled perhaps one of the most difficult and painful journeys in humanity?

As it happens, my passport says "Female". I live life to my gender, and all my friends, family and work colleagues see me as Steph.

But gender-criticals are not known for that female trait "empathy".

To quote Dr Phoenix C S Andrews, "Gender critical is an immersive fiction in which they think they are truthtellers without an ideology, but actually, they are bonkers conspiracists".

Trans men and women know that their gender is much more important than their birth sex.

All non-binary know who they are too.

We all assume sex by gender expression - we wear clothes to cover genitals.

How do I know Kathleen Stock is female or indeed a lesbian? I have not seen her genitals nor seen to who she may or may not have sexual relations with.

She "Self-ID's" as a lesbian - I Self-ID as a rad fem trans lesbian and, of course, a woman.

Good luck to her and indeed me.

I am more than happy to acknowledge sex is real, and in some aspects of life (principally for scans and surgery), it should be declared. I am also mindful that in required and justifyable circumstances maintaining biological single-sex spaces is sometimes necessary. There is a difference between a refuge and a cinema.

Love my gender - that of a woman?