The everyday sign outside the ladies loo that demolishes the 'women's places' argument. 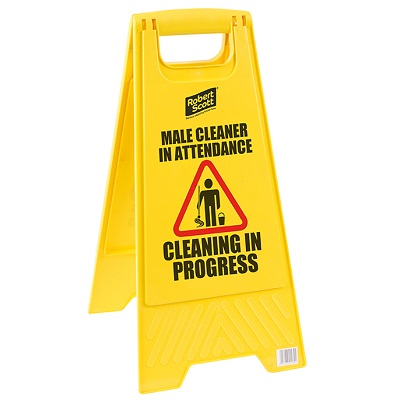 We have all seen it, probably hundreds of times; the sign saying "Male Cleaner in Attendance".

Either way, it is normal.

We don't acknowledge him if we do see him (well I don't) and we don't always notice if he has any cleaning equipment, in fact thinking about it on more than one occasion, I have just seen him with only a duster or a rag.

And this everyday scenario demolishes the gender-critical argument about men being in 'women's places'.

And this simple scenario, which I am sure many people have thought of in the past - including people in the gender-critical camp pretty much proves what their real agenda is.

It is not men in 'women's places' that is the gender-crits problem - it is trans women. And I know this for a fact because I have seen many hundreds of web pages saying trans women are potential predators, but I have not seen one single page warning about the dangers of male cleaners.

When starting to build my website in June 2020 and become an activist, I was oh so nieve. A friend warned me that horrible things were going on, but I did not believe her.

And then I found a post on a website that used the word "eradicate" gay & trans people, and I was stunned.

I did not sleep that night - I was in shock. And then a few days later I found something even worse. Something so vile from the gender-critical camp that I am not even going to say what it was.

I started to think back to my history lessons when I was at school and how the Nazi's started their persecution of the Jews. It all started with campaigns not too dissimilar to the gender-critical camps ...one of creating fear and mistrust of a small but known section of society.

This deliberate campaign has been building, aided by tabloid newspapers 'click to sell' trash and the Mumsnet radical feminist groups who frequent their blogs with lies and innuendo. Sadly, there are also the extreme right-wing supposed "Christians" who do the disservice of not promoting love; they see LGBT+ people 'as the unclean'.

None of them cares about the hurt that they cause, and they do not believe that trans people often think of self-harm, suicide or of the 30% of the trans population that (according to the book by Allan and Barbara Pease, "Why Men Don't Listen and Women Can't Read Maps") - commit suicide.

To the US Christian extremists (silently) they believe it is about the eradication of LGBT+ people and the less of us, the better - whatever the means. The means justify the end; at least that is the thinking of some of them.

Many of the gender-critical movement will, of course, deny they want us gone - and I am sure that may well be the case.

The claim is they just want to make the ladies loo "safe".  Strange, therefore, that trans women have had the legal right to use the ladies for well over a decade and there has never been a single attack against a woman involving a trans person.

But they forget to tell their audience this fact.

Yes, there have been very occasional issues with a mentally ill person undertaking distasteful acts like flashing and the like, sometimes wearing wigs or underwear - but a bona fide everyday trans woman? No, that has not happened.

In fact, when you look at statistics, trans people are probably the most law-abiding group in society and that cisgender people commit crime at a rate of six times that of trans folk.

The UK prison population is around 83,000 at the moment. Just 160 of those souls are trans. And to add insult to injury, some 84% of trans people are housed in a jail not consistent with their gender.

Those stats are that trans people around six times better behaved in society than cis people is not surprising given the fear that we live under. Like the Jews, in the time of Nazi persecution, we keep our head down.

So the 'woman places' gender war rages on.

Driven by false fear and hate, many gender-crits are relentless - and their argument has now succeeded in getting on government ministers 'to do' lists, apparently having been fooled into giving the GC agenda priority over trans peoples problems. Some trans people are leaving the UK full stop; one getting political asylum in New Zealand because the UK is so transphobic.

Reading that... are you still proud to be British?

Many politicians, especially Tories, see our pressure groups, not as real people but as left-wing, drugged up, anarchists who protest about everything marching up Whitehall with "Socialist Worker" signs swinging from a well-used pole.

But I have never been on a march or demonstration - that will change.

I will march and demonstrate and fight (peacefully) - because going to have a pee is a human right. And I don't care if it is in the ladies or a gender-free loo like in a train or plane, but I am NOT going to the gents, where for sure as a trans woman, I would be threatened, abused and possibly physically attacked.

So perhaps if the gender-crits do win this 'womens toilet war,' -  I do have an answer for the trans women in the UK.

Pop an A4 paper sign in your bag saying "Any Gender Cleaner in Attendance," carry a cloth and smile.