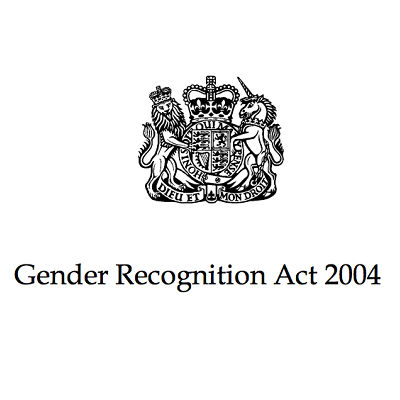 This morning I have had several conversations on Twitter, and some folks are wondering why I have not applied for a Gender Recognition Certificate (GRC).

Very few trans people apply for a GRC, and there are a variety of reasons for not doing so. For many, it is the "principle" - the Gender Reform Act of 2004 works on the basis that the applicant is mentally ill.

This is because when the Act was formed (in 2004) it was believed transgenderism was mental illness - this has subsequently been proved incorrect, and the World Health Organisation and NHS now accept that trans folk are not mentally ill.

To acquire a GRC, there are certain "conditions" that have to be fulfilled. In comparison to other countries in Europe, the UK conditions are rigorous and indeed arduous.

For example, we have to have physiological reports proving "Gender Dysphoria". These reports have to come from specialists in the field of gender issues. From achieving these I was able to access surgery on July 2nd 2019.

We have to "come out" to everyone - sometimes that is very difficult for trans folk.

We have to change all our documentation - driving licence, bank accounts, HMRC documents, payslips - you name it - it has to be changed.

We have to live life in the gender we choose for two years. This is called the "Real Life Experience" test.

If married, we have to ask for permission from our spouse.

Once a trans person fulfils all of the above we can apply for a GRC but here again justice lets us down. We apply to a "panel" - we dont know who sits on the panel so in effect we have blind justice. Nor technically is there a right to appeal.

In most respects, I have the required documentation to apply. But it sticks in my throat that I am applying for something on the basis that I have mental issues.

I have not asked my wife for her agreement for me to apply for a GRC and while we obviously have a great relationship if she had to ask me for permission to apply for something it smacks of patriarchy which I hate with a vengeance.

Then there is the issue of the two-year rule - I have many months to go yet before I qualify.

Teresa May when Prime Minister realised trans lives are complicated. Indeed, this is backed up by Lady Hale of the Supreme Court who said this in judgement on the 1st Nov 2017:-

Gender dysphoria is something completely different - the overwhelming sense that one has been born into the wrong body, with the wrong anatomy and the wrong physiology. Those of us who, whatever our occasional frustrations with the expectations of society or our own biology, are nevertheless quite secure in the gender identities with which we were born, can scarcely begin to understand how it must be to grow up in the wrong body and then to go through the long and complex process of adapting that body to match the real self.”

“People can be insensitive and even cruel; the evidence is that transphobic incidents are increasing, and that transgender people experience high levels of anxiety about this. It is also because of their deep need to live successfully and peacefully in their reassigned gender, something which non-transgender people can take for granted.”

The May government instigated a public consultation into reforming the Gender Recognition Act, and most trans folks agreed that the UK should use a system of "Self Identification." This system is used in several countries across the world very successfully including Ireland and Malta.

We are yet to find out which method the Johnson government will choose, but the current GRA is not fit for purpose.