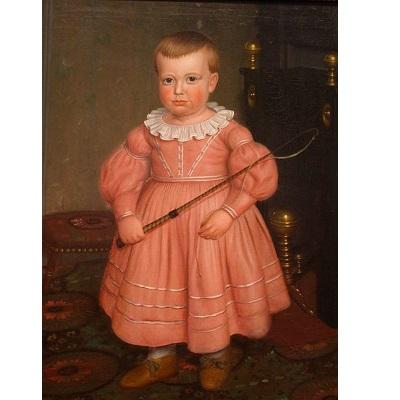 One of my most treasured family possessions is a black and white photograph of my grandfather taken in 1899. He was six years of age, sat quite upright on a stool wearing a white smock dress with lace cuffs and collar. His beautiful long, blonde straight hair is almost to his waist.

I remember him as a "man's man" who was certainly very tough but never unfair, and everyone in my family deeply loved him - and in particular by myself. The moral of this story is that you should never judge anyone by their clothes not that my grandfather would have had a choice what to wear back in the 1890s because for sure, he would not.

All kids, both boys and girls, wore the same - necessitated no doubt by the financial situation of the day and the ease of "handing down" what was seen as unisex clothes.  Obviously, with no colour photo's back in the 19th century I am not sure what colour the other garments that he is wearing is, but for certain from paintings, we know boys wore pink and girls wore blue. There is still some confusion if gender stereotyping was ever involved and I am sure from country to country there were different "social rules" but from what I have read boys were often put in pink as the colour was closely associated to red - a strong "masculine" colour with the meaning that as the boy grew up (pink) - he became a man (red).

In the 1920s there is evidence of this with an American trade magazine called "Earnshaws" saying:-

"The generally accepted rule is pink for the boys, and blue for the girls. The reason is that pink, being a more decided and stronger color, is more suitable for the boy, while blue, which is more delicate and dainty, is prettier for the girl".

Time magazine said similar in 1927 and in Belgium there is also strong evidence that pink was the "colour" for boys. But in other countries, the "rules" were the opposite - if indeed they were rules at all.

So when did things change?

Again there is confusion, but many say it was during the second world war when the nazi's forced gay prisoners in concentration camps to wear a uniform with a pink triangle. These people were seen as the "weak unclean" similar perhaps to the view of some gender extremists today towards trans folk.

From the 1940s onwards we did see gender stereotyping in the UK and indeed, pretty much worldwide.

Pink was for girls and any boy or man seen wearing pink was dubbed as gay, weak, effeminate or at least a very brave rebel. It was probably not until the late 1990s that things began to change, but many still believe that pink is a "girls" colour.

Just yesterday another "row" broke out when Emma Willis (I have to say, my favourite TV presenter) defended her view that her son Ace sometimes chooses to wear a pink top and should not be judged. And she is quite right, of course.

What Ace has probably realised is that he looks and feels good in pink because of his blonde hair and a paler complexion.

We all have colours that work for us better than others, and Ace is almost certainly either a "summer" or "spring" - meaning pink tops "works" for him very well. He likes colour and there is nothing wrong with that at all.

Pink with blue jeans works exceedingly well - and I have to say, my grandson, who has the same colour characteristics as Ace looks amazing in pink tops and blue jeans.

Dont tell him he is a girl though - he is likely to kick your head in!