Reflection on the Trans fallen. 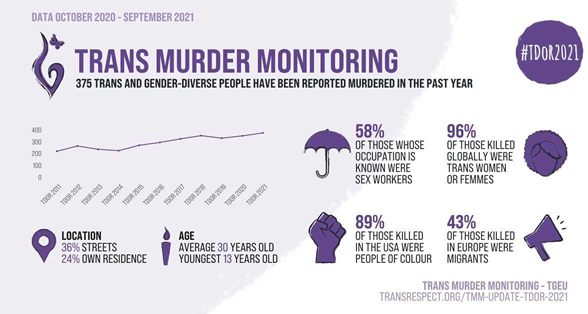 As we reflect on the Trans Day of Remembrance, we have to ask why this happening?

As we remember those transgender people specifically, but non-binary people in general, and reflect on their lives and the massive toll of lost skills, passion and personality that has gone forever.

Around the world, being transgender is being seen as dangerous and more intolerable to some people, and a danger that is worsening.

Governments across the world restrict trans rights, where, in many countries, simply being transgender is illegal, and in a few punishable by death. Transgender people face restrictions, fear, and hurdles in daily life, to simply just exist as themselves.

It is beyond belief why, in ANY civilised society, that populations fear and struggle with the existence of transgender people. We are human beings, like anyone else. We just want to live our lives and be part of society, JUST LIKE ANYONE ELSE.

We know, that many people in the UK accept and are happy with transgender people.

It is only a few GCs (gender-critical) people that have an issue and wish to make our lives almost intolerable.

Sadly, they seem to be in and/or have the ear of governments around the world. The reasons why, and the funding of the same, is widely known. This is not the place for that discussion.

We do have to discuss and reflect on why society is so horrible and divisive to trans people.

We are not a threat to anyone, despite GCs suggesting we are ALL sex pests and deserve to be locked up.

In some countries, the UK included, simply existing and being allowed the most basic of human rights, is under attack. Under attack from the media, policymakers and GCs specifically.

GCs fear our presence, in the bedroom, prisons and the simple human necessity of going to the toilet.

To get healthcare is easy for everyone in the UK unless you are transgender.

Then, apparently, we are some unknown alien creature from a far-off planet that has to be intensively scrutinized and examined before any judgement is even considered as to whether we are permitted help.

That, with a current wait of 26 YEARS (if you were referred today to the London GIC), being slightly more than the 18-week MAXIMUM wait time demanded for everything else!

But it’s OK, that trans people can feel safe at home or at work where they are in a protected environment right? Wrong.

In households where trans people are despised, misunderstood or just not accepted, it can be torture for a trans person. It doesn’t matter if they are ‘out’ or not. The fear of being in or coming out into a hostile environment is debilitating.

Even for those trans people able to be themselves, and in their own home, fear is still there. It’s everywhere. That’s the problem.

The mere fact the world is so trans hostile means that simply being seen to exist is too much for some people. Those people then react and react badly. That fear is spread by GCs, governments, politicians, and the media. None of which, in many countries is even sanctioned, despite furious and rapid calls to do so.

So, as we reflect on the large numbers of trans people that have paid the ultimate price for being themselves, or wanting to be themselves, we have to ask why is this happening?

I am certain there are many trans people who die, for many different reasons each year, who are not recorded as being trans and may die from causes in the same way as anyone else. Whether this is from accidents or (natural) health conditions. That number is probably few, and every life lost is a loss to someone, a family and to friends.

I am reflecting specifically on those trans people who had their lives taken from them by others or felt so tangled, frightened and restricted inside, that they could see no future through the darkness and took their own lives.

The reason: Society. A cruel and unaccepting society. On that drives fear and negativity towards trans people.

If trans people were accepted everywhere, by everyone, and laws weren’t deliberately restrictive, trans people wouldn’t take their own lives from fear and wouldn’t be killed by the fear or hatred of others.

When we remember ALL those trans people who had their lives TAKEN by society in one form or another, there is another and deeper question.

How many GCs, Government ministers, MPs, Media moguls, GC journalists, presenters, Actors, business leaders and generally trans hating people have lost their lives as a direct result of the hatred spouted and spread?

My guess is ZERO.

The haters are NEVER at risk, despite all the claims of “being silenced” and the protections of “free speech” arguments they put up.

Of all the misinformation, twisting of facts and downright LIES that are spread, none are affected in the same way. Nor should they be.

What they fail to understand, however, is their very words have two disastrous effects.

1. That some trans people take the information seriously and consider that the chance of them being themselves is so difficult or fearful, that there is NO future, and they take their own life.

2. That there are those in society, who, for whatever reason, feel they can take the law (or perceived law) into their own hands, act on those words, perceptions and policy intentions and KILL a trans person.

Words, rhetoric, and government policy are powerful things. On their own, and with a situation of a reasoned debate, they are no different to any other policy. However, with the relentless and growing tide of hatred that is presented in the UK and around the world daily, this is not normal. It is a targeted campaign.

We know there are those who have literally called for the EXTINCTION of trans people. Just view that from the trans persons perspective. You are who you are, but you are TOLD that you should be extinct. That is mentally damaging. That also affects how some in society react. They act on that extinction.

All the factors combined, of media hatred, GC rhetoric and misinformation, delayed and deliberate negative healthcare policies all add up to too much for some people.

GCs, the media, and all those who ‘happily’ spread the negative and hateful views, YOU are responsible. Totally responsible. You DON’T HAVE TO DO THIS.

Being trans ISN’T a choice - but being HATEFUL is!

Society HAS to change.

Society and people at large HAVE to get the governments, organisations, and politicians to understand, respect and STAND UP for trans people.

Society has to call out and pressure the negativity and make a change for the good.

So, we remember all those transgender people who have given their lives simply to exist.

We bow our heads in respect for them and shake our heads in the shame that this has come to pass in civilised societies around the world.

And to remember them, we must continue the fight and struggles to become accepted in society and to show the populations, that transgender people are not to be feared but it is the GCS and the organisations behind them that are to be feared.

We will remember them.