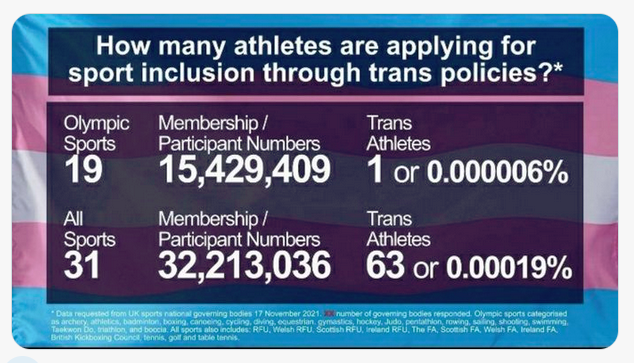 Google “the definition of transphobia” and currently this will come up "the dislike of or prejudice against transsexual or transgender people". Google quote from Oxford Languages.

Google “the definition of transphobe”? Well, there isn't one, but in essence, it means the same but on a personal level.

The UK has more than its fair share of transphobes, but the newspapers don't call them out - they give them a platform and then the transphobe remarkably claims that “they have been silenced”.

But how can we recognise a journalist with a genuine point to make and one who is transphobic?

Davies often writes articles for the press saying she wants to "defend women's sport" invariably from trans women competitors participating unfairly. The strange issue is, if you ask the average person in the street the name of a British trans woman in elite sport, you will get a blank look. Hardly surprising because to date, not one has competed.

Consequently, 'trans hostile' newspapers, media and journalists “import" trans athletes' stories from other countries to feed their hungry hordes of transphobic followers on social media and beyond.

We have seen it all before, of course namely Australian Rules Football player Hannah Mouncey and then New Zealand Weightlifter Laurel Hubbard who the British press targeted so much that she became the second favourite to win a gold medal in her event in the last Summer Olympics. In reality, Hubbard didn’t manage to even register a legal lift.

She came into the event ranked 16th and finished 16th - last.

Surely the British public is starting to wise up to the scare stories the Gender Critical cult journalists seem to push out?

"Trans women are going destroy women's sport" is the cry, conveniently forgetting that trans athletes have been eligible for the Olympic Games since 2004 - yep, that's eighteen long years. No British trans woman athlete has been picked for an Olympic team, nor even remotely got close to selection.

And that's the way the transphobes want it to stay, and to their credit, they say that quite openly. These people are indeed honest - honest in their prejudice against trans women in sport.

Davies clearly says she is not transphobic.

She says she supports trans people's right to exist (amazingly some transphobic people don't) - and advocates for trans inclusion in sport.

Looking at Davies Twitter timeline though, some could be excused if they started to ask questions.

Viewing her tweets and retweets on Twitter (yes, we have print screens), on the 23rd of March 2022, Davies made thirty-eight interactions, and circa twenty-one had either direct or indirect reference to trans women or non-binary people in sport.

Well, we get back to the fact that the British Summer Olympic team in 2021 consisted of 376 athletes. Black, white, gay, straight, tall, thin, but not one transgender. The same applies to ALL the previous Summer and Winter Olympic Games going back to 2004.

Indeed, in the entire history of the Olympic games, we can think of just three, nope, that's not a typo, THREE Olympic trans and non-binary competitors from the US, Canada and New Zealand.

Twenty-one tweets in one day, involving trans and non-binary people, often centring on a university (yes, UNIVERSITY) swimmer based in the United States.

Do you know who won the 100-metre backstroke for Oxford University in their last meet?

But Sharron Davies will likely tell you if Lia Thomas (the trans woman swimmer from the US) is first, second or third in a university meet.

Davies wrote for the Mail Online (published 22:31 19 March 2022) with the headline "I don’t want trans athletes excluded but Lia Thomas has proven we must have fair competition for females - bodies do sport, not feelings. ....

Davies then writes this: It has been obvious for several years that the rules around transgender participation in sport were unfair to biological females and promised to create the kind of mess that we have seen in the Atlanta pool.

How many transgender athletes have there been in the last 18 years that have reached the Olympics? We make it about 71,000 athletes who have competed in the Olympics across all sports since 2004, and just three were trans. Destroying Women’s Sport? Are we wrong?

Her article, though, goes on to say something quite startling about Lia Thomas saying: "she is nearly 6ft 4in tall and has large hands and feet that act like paddles".

Because when we Googled "Lia Thomas height and weight" we see very different results.

The Sports Grail for instance says Lia "has a height of 5 feet 8 inches" -  StarsGab states the same as do Celebrity News.

Indeed, while there is confusion about Lia Thomas's height, we could not find any totally independent information that she is close to 6ft 4in tall. Wikipedia say 6ft 1” so if we averaged out everyone's guess perhaps Lia is a tad taller than Davies when she was competing.

And indeed, even though the media favour images that make her look bigger, images taken alongside her other Penn University teammates do not imply she is excessively tall.

Moreover, there are certainly numerous female swimmers over six feet tall, including Olivia Smoliga, Missy Franklin and Cate Campbell to name just three of many. Sharron herself is recorded as 5ft 11in. The average height of women is 5ft 3in, so did she have an unfair advantage over most women?

And how does Davies know Lia Thomas has "large hands and feet that act like paddles"? Has she seen them? Have they been measured?

Arguably the greatest male swimmer of all time Michael Phelps had many ‘unfair advantages’ including size 14 feet and double-jointed ankles which truly meant he effectively had flippers, yet were there any complaints? He won 28 Olympic Gold Medals aided by his natural advantages and is celebrated around the world, yet trans women receive unprecedented levels of targeted complaints, even though, unlike Phelps, they only compete once they undergo treatment to remove their natural advantages and are struggling to even qualify for any world event.

Sadly, Lia Thomas is one of the latest in a row of trans athletes who are being bullied by British newspapers just for being transgender. Fortunately, though, Lia does have some support from inside her sport. NBC reported on the 1st of February 2022:

Brooke Forde — who is ranked third in the country behind Thomas in the 500-yard freestyle — said last week that she does not have any issue with Thomas’ competing.

“I have great respect for Lia,” she said in a statement read by her father, sportswriter Pat Forde, on Yahoo Sports’ College Football Enquirer podcast. “Social change is always a slow and difficult process and we rarely get it correct right away. Being among the first to lead such a social change requires an enormous amount of courage, and I admire Lia for her leadership that will undoubtedly benefit many trans athletes in the future.”

She continued, “I believe that treating people with respect and dignity is more important than any trophy or record will ever be, which is why I will not have a problem racing against Lia at NCAAs this year.”

Following the use of the latest podium photo depicting Lia plus three fellow competitors standing apart from her, the media reported on this as evidence of her height advantage (Lia was standing on the winner's podium) and a show of defiance from fellow swimmers. This received an instant response from one of those swimmers, Erica Sully, not only correcting that the photo of the three swimmers was a separate picture purely because they were Olympic teammates, but also sharing a photo showing they had shaken hands warmly straight after Lia’s ‘AMAZING 550free’.

What is clear however is that trans women on testosterone blockers and estrogen will lose 10 - 15% in performance. More recently on the 24th of March, The Independent published an article in the UK with the headline “Critics accuse trans swimming star Lia Thomas of having unfair advantage. The data tells a different story.

The Daily Mail however seems to have a different agenda to The Independent, NBC and trans athletes.

Famed for their neo-nazi stance in the 1930's as well as being the most complained about newspaper in the UK for years running - George Clooney once said described them as "The worst kind of tabloid". Indeed, just days ago, one of their journalists, has harassed the parents of a young trans woman, leaving them no choice but to threaten legal action. The athlete in question was Emily Bridges who has done nothing wrong, been 'open and above board', and played by the rules yet still gets banned from even competing after a disgraceful about-turn brought about by transphobes.

Clearly, no one wants women's sport to be damaged by the inclusion of trans women in elite sport, and if there is a safety risk to other competitors without question, a trans woman should not participate. Nor should a trans woman take part if there is a proven male puberty advantage, and this is precisely the guidelines that have recently been set out by the International Olympic Committee.

After many years of studying all the scientific evidence (yes Sharron, facts do matter), their Medical and Science Director clearly stated that Trans Women are Women and therefore their position must come from one of inclusion, but that this needs to be both safe and fair.

We agree. He also remarked on the fact that we have seen so little success from any transgender athletes "If you are prepared to extrapolate from the evidence there is, and consider the fact there have been no openly transgender women at the top level until now, I think the threat to women’s sport has probably been overstated.”

Does all the available evidence justify twenty-one tweets in just twenty-four hours from a former swimmer?

Are there not more important things than a university swimmer from the US?

If just one per cent of a team was transgender, is that the end of the world?

Sadly, for some it clearly is.