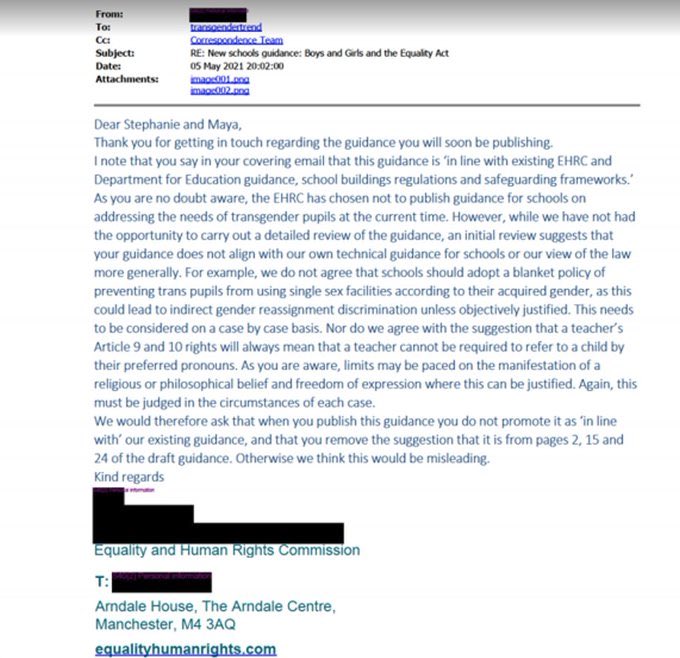 In May 2021, the EHRC quietly withdrew the Transgender Schools Guidance they had been working on updating since at least March 2020, where it is referenced in their published Board Meeting Minutes.

Yesterday, a copy of an email between the EHRC and trans hostile lobby groups Transgender Trend and Sex Matters surfaced on Twitter. Some were quick to praise the EHRC for restating what is the current legal position, despite the apparently trans hostile rhetoric coming from this public body since the start of 2021.

However, the email itself is more interesting for what it doesn’t say - and coupled with the other evidence presented here, which is publicly available - suggests a somewhat different picture.

It should be noted that the EHRC had already been working on Transgender Schools Guidance for almost 18 months prior to these events taking place, and that the current Chair Kishwar Falkner only took up the position in February 2021.

The EHRC received the apparently initial communication from Transgender Trend and Sex Matters on the 27th April 2021 in regards to the Schools Guidance they subsequently published online. The email is effectively asking for the EHRC’s endorsement.

The EHRC responded on the 5th May 2021 - and the response is interesting, to say the least.

Firstly, the EHRC provided review services to these lobby groups - which in itself would seem to indicate a conflict of interest out of step with the claimed need for impartiality which was stated as a reason for withdrawing from the Stonewall’s Diversity Champions Scheme.

The EHRC then went on to state the current legal position following this review, advising the two lobby groups that the guidance was legally incorrect and to remove any references to it being in line with the EHRC’s current guidance.

What is really interesting, however, is what the email doesn’t say.

Despite it being legally incorrect, the EHRC did not advise these groups not to publish, placing schools in a position of facing legal action if discriminating against transgender students by using it.

Between the lobby groups guidance being legally incorrect, not advising against publication and the potential risk to transgender students, it’s little wonder that the EHRC wanted to appear as if they were distancing themselves from it.

Subsequent events indicate that more hostile motives may have been at work in the EHRC.

Because on the 8th May 2021, 3 days after being told by the EHRC that their guidance was incorrect, Transgender Trend and Sex Matters published it anyway.

And on the 9th May 2021, the EHRC quietly dropped working on their own Transgender Schools Guidance that they had been working on for almost 18 months, releasing the info via the Telegraph instead, with the EHRC stating :

"Considering the lack of definitive case law, it has become clear that publishing our guidance may not provide schools with the clarity we hoped. This would not be in the best interests of young people, including trans pupils. We have therefore decided not to publish our guidance."

(1) Was failing to advise against publication of the Transgender Trend/Sex Matters guidance done deliberately, in order to provoke an instance where ‘definitive case law’ would be created by placing transgender students at risk in school, and schools at risk of costly legal action?

(2) ‘Definitive case law’ that would then be interpreted in favour of trans hostile groups, in the same way as they did in getting ‘gender critical beliefs’ protected?

In another article in The Sunday Times on 9th May 2021, Scottish lawyer Aidan O’Neill is published stating that guidance that had been in use since 2017 was breaching the law. O’Neill has also worked with trans hostile lobby group ‘Women’s Place UK’, by providing ‘in depth legal opinion’ during an attempt to force transgender people always to be recorded as their assigned sex at birth on the Scottish Census in 2020 brought by another trans hostile lobby group, Fair Play for Women.

It should also be noted that O’Neill works for Matrix Chambers and has provided services to the EHRC previously. Matrix Chambers is the same law firm that Karon Monaghan QC works with.

Monaghan was used by the EHRC in the Forstater vs Global Development appeal intervention which enshrined ‘gender critical beliefs’ as protected under EA2010, and gave evidence to the Women and Equalities Select Committee Enquiry on GRA Reform, opposing reforms that would simplify the process that allow transgender people to change their birth certificates.

In our opinion, the timeline of events appears to be too coincidental to be uncoordinated, with the Transgender Trend/Sex Matters Guidance being published one day before the EHRC dropped their own.

This suggests that the EHRC may have been working in collaboration with these trans hostile lobby groups, to deliberately create a vacuum that was filled by incorrect guidance, potentially placing transgender students at risk of harm and schools in a precarious legal position in order to provoke circumstances to generate ‘definitive case law’ that supports trans exclusion.

Even if that isn't the case and it's all a huge coincidence, the end result of the chain of events above has the same impact.

This indicates that the EHRC are unfit for purpose given their role is to protect equality, and those leading it are unfit to be in the position they are.