Womens places belong to both cis and trans women. 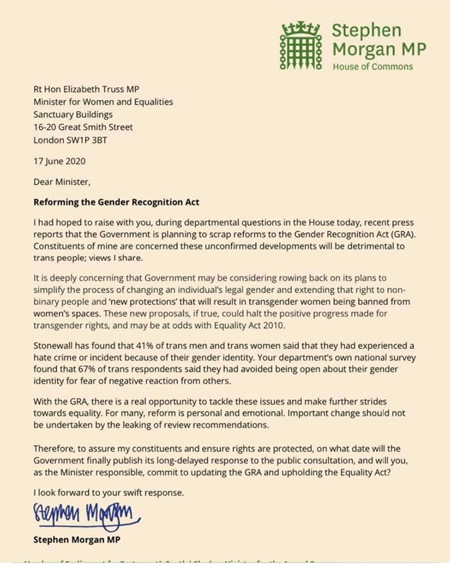 Another MP, Stephen Morgan (Portsmouth South) has called out to Liz Truss regarding the forthcoming changes to the Gender Recognition Act (GRA).

Picked by the speaker to ask a question in the house today sadly, he was unable to get his question answered within the time limits. But instead of sitting back he immediately wrote his question by way of an immediate letter to Liz Truss requesting a "swift reply".

The urgency of his letter simply reflects a large amount of opposition to any detrimental changes to trans rights. The Gender Critical lobby who are clearly at fault for the "TERF wars" simply has no right to interfere in any changes in the GRA.

The Gender Recognition Act is about trans men and trans women not about cis men or cis women.

And while there is a case to ensure both trans women and cis women are always safe in selected women places such as prisons, refuges etc., there is certainly no valid reason to restrict access to cis only toilets or changing rooms. Unless of course there is overwhelming evidence on the day that any entrant (male or female) is up to no good.

And on the balance of evidence from the fourteen countries that already have Self ID this never happens and why should it?

The bottom line is if a man wants to get access to a Ladies loo, it is just so simple.

He doesn't need to put a dress on he simply puts up a sign saying "Male Cleaner In Attendance", and he has immediate access to all the toilets available and no one...simply no one... will give him a second look.

So why all the fuss about trans people going to the loo?

It is very noticeable that Stephen Morgan is yet another Labour MP deeply concerned about the leaked changes to the GRA and his letter follows on from the one recently sent by Labour's Zarah Sultana; MP for Coventry South.

I am aware that LGBT Conservatives have made representations to the government over the Liz Truss statement on the 22nd of April and the recent alleged leak printed in The Sunday Times who have also organised a readers poll about this issue.

And do I trust The Sunday Times or their right-wing readers on this issue? No.

And indeed, why should I?

My gender is my gender, and I don't need the Sunday Times or indeed their readers to undertake new polls when the government asked for a consultation and got I believe around 100,000 results, 70% of which are pro Self ID.

So when the Sunday Times gets their foregone conclusion result no doubt we will have another transphobic headline and the government will want to quote the Sunday Times instead of the 70% majority who took the time to take part in the official consultation.