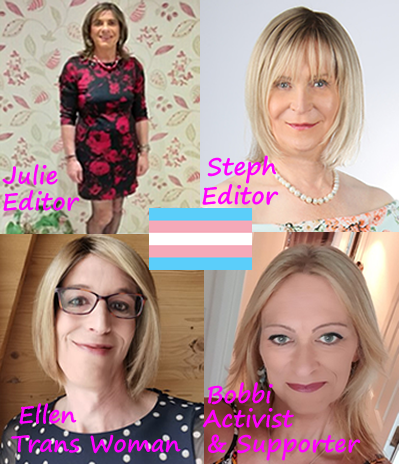 In late May 2020, less than one year ago, the Steph's Place website was made 'live', hoping that I could bring to the British public's attention the plight of transgender people.

I was mainly concerned about those of us in the UK, - the 1% of us, who are trans, but also making room for transgender people in other countries who also suffer discrimination and sometimes persecution. At the time of launch, I could not have hoped that the website would go on to see thousands of visitors a week and that thanks to social media, I would go on and meet so many amazing people.

As I look back, my life has changed.

I am now a fully-fledged trans rights activist and have reverted back to journalism. Still, instead of writing about kids' health & safety issues, I usually write about problems people suffer in the transgender community, my community.

I is singular, and as such, my views are mine, but our community is not singular - it is millions of transgender people worldwide with one common denominator but with hundreds, no thousands of different problems.

And to be able to better represent our diverse, disadvantaged community, 'I' must become 'We.'

Steph's Place has changed to become a group of like-minded people - good people - who I have met and admired in my journey in the last ten months or so. People who like me know what it is like to be trans or who have a family member who is trans. And this is important because, oh so often, we get cis-gendered people telling us trans folk what is best for us!

So let me introduce you to Claire, Julie and Paul, my co-editors of this website who, between us and others - want to make trans voices louder and clear.

Claire:  (pronouns - she/her) - Claire spent most of her life in the closet, enduring an exploration / shame / self hate cycle many trans people will be failiar with. After coming out in 2016 she explored identifying as gender fluid for a couple of years, being openly gender non-conforming as a "guy" - which was not a fun experience. As things settled down her natural identity asserted itself fully, and is now almost exlusively on the "binary" female side. Coming to terms with being trans has helped identify some other longstanding issues - enabling her to get treatment for ADHD, which she has unknowingly lived with all her life. She is currently on the waiting list for a GIC, trying to get a local LGBT group started, and also runs a micro enterprise that raises awareness of transgender lives and issues through workshops and talks, see www.clairestranstalks.co.uk.

Julie: (pronouns - she/her)  - Julie spent many decades as a gender non-conforming guy before being diagnosed with gender dysphoria at a gender identity clinic in 2016, and advised to live as a woman 100% of the time to maintain her good mental health; but for relationship reasons, she now leads a genderfluid lifestyle. She is Dorset Area Coordinator for transgender support charity, Chrysalis, she facilitates a transgender support group in a prison, is a member of Wessex Crown Prosecution Service Hate Crime Scrutiny Panel, a Governor of Hampshire Hospitals Foundation Trust and has her own transgender consultancy, see www.juliemiller.me.uk

Paul: (pronouns - he/him) – Paul joins us offering his understanding and perspective as a cisgender father of an adult trans daughter. You can read about Paul’s experience of a trans parents journey of discovery in the article he posted on this website HERE:  For the four years since his daughter revealed her true identity, Paul has learnt first-hand the reality of being trans plus witnessed the lies that are spread on social media and in our national media and decided that there had to be a place for those within the community to feel safe and supported by like-minded allies. Steph’s Place will help to provide this.

For over the past three years or so, transphobic groups have been formed and given considerable media coverage. Often these groups say they are women’s or biological groups - but the truth is their real aim is to disguise transphobia under a convenient cloak.

Transphobia - the true definition of this word, "transphobia" is - "the dislike or prejudice of a transgender person."

And to counter these transphobic groups, an everyday person in the street may think our government would protect us. Trans people - a small, vulnerable group of people, many of who suffer mental health issues because trans healthcare in the UK is in disarray - that waiting times to see specialists can run into over five, yes, five years.

But the UK government does not help.

Lobbied by right-wing extremists, the transphobic groups, even alleged "Christian" organisations from the United States, trans people are left by our government isolated and alone.

Our joint aim, though, is to raise the trans voice.

To continue to increase awareness and acceptance in society of trans people - and to eventually form an organisation to counter the transphobic groups that seek to erase our voice and, in some cases, our very being.

And to do that will mean this website must change.

We have a plan.

Time for transition - time to fight back.