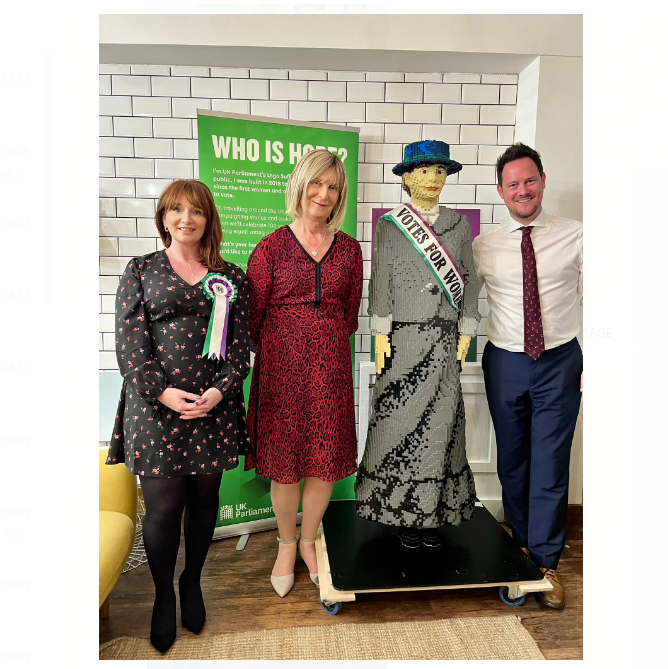 On the evening of April 22nd, I was invited by Stephen Morgan MP to give a speech at his "Women in Democracy"  event in Portsmouth celebrating the arrival of "Hope" a Lego model which was commissioned by the Tory government at the cost to the tax-payer of £19,000.

I am unsure if that is a good investment, however, the money is spent so Hope should be utilised as much as possible. Below is my speech which sadly because I am a trans woman, I have received online abuse.

In the 1980s and 1990s being "Gay" was seen as a target. Now I and other trans people are targets, but I do what I do for the trans kids of the future.

Here is my draft speech, which on the night was marginally changed because of previous speakers' points:

Firstly, I would like to thank Stephen for holding this memorable event, it’s not every day we see a five feet six inch Lego model of a suffragette…….. and secondly…. thank you all for attending – especially if you drove ….parking in Albert Road on a Friday night is.. not easy!

For those of you who do not know me, I am Steph, the Women’s Officer at Portsmouth Labour Party and I identify as a trans inclusionary radical feminist.

What does the label radical feminist mean – well there are a few different definitions but.. basically, it means we blame men. Blame men………… for everything.

By a quirk of fate – I am also a post-op trans woman, but don’t panic – being transgender…. is just a small part of me.

And since my transition which occurred a few years back two differences have become very apparent to me.

Firstly, because of my personal vanity, I can be described as “high maintenance” ……….…. which, in itself …could be.. seen as flying.. in face of being a rad fem.

Secondly, I have become very aware about the oppression of women.

When we live in a box it is very easy, indeed normal …to just see inside our own box. But I changed boxes ….in so doing ….I now witness the challenges women face…. on a day-to-day basis.

And for well over two thousand years this struggle has been going on.

A struggle marked by the building of Hope – yes .…..made of Lego bricks.. but every brick represents a personal struggle of just one woman….. to “get the vote”.

The biggest battles just now in the UK, could be seen as fighting government sleaze, fighting against climate change, or fighting inflation. But we should never put on the back burner is – the fighting for human rights.

The struggle for women’s liberation in a democracy …is far from won – just to get voting rights took many decades – and in today’s society:-

We know women don’t feel safe walking down the streets at night – and for justifiable reasons. We know a woman is on average murdered by a man every three days – and in the vast majority of cases, the murderer… is a man the victim knows. We know many suffer domestic abuse – yes, sometimes victims are men – but the majority are women, many of whom are trapped in a relationship because of the economics of family income. We know too that the current government don’t care much about protecting women, that they have failed to ratify the Istanbul Convention despite signing up for it more than a decade ago - nor have they made Misogyny a hate crime.

We know that refuges and domestic abuse charities mainly used by women have experienced huge funding cuts – and that is one of the reasons for this fundraiser tonight in aid of Stop Domestic Abuse who do a truly amazing job. You can contribute to the SDA through their “Buy a Brick” campaign via their website – SDA needs to raise £1 Million Pounds. You can also contribute to SDA every time you buy something from Amazon by signing up to an Amazon Smile account.

Sadly…… we also know …..that currently……women are skipping meals so that their kids get fed.

All the issues I have outlined - affect women dis-proportionately in comparison to men.

And we all have to fight for women’s liberation…. and my biggest regret in life is that I was not with you many years ago.

In truth we must all work very hard to improve women’s rights in our dare I say alleged, democratic society. But we must also look over our shoulder and be aware of the far-right… because human rights are under threat in many countries… such as in Poland and Turkey…. where they are being rolled back at an alarming rate.

Also ..in the United States right-wing Republicans are attacking LGBT+ folk and women’s rights and they have no intention of keeping their extremism within the borders of the US – the UK is very much on their radar as a “target county” and in truth, extremist organisations from the US are already working here in the UK within universities, politics and feminism.

Abortion is of course a deeply sensitive subject, and it is not my intention within this talk to justify the rights or wrongs. But I would argue that it is a woman’s right to choose – in particular if she has been raped. And this issue disproportionately effects women of colour… and the less advantaged…. especially in the United States.

Just last Friday the BBC reported that a 100 strong demo was held in a road approaching Queen Elizabeth University Hospital in Glasgow. The organisers were a group called the “40 Days for Life” who were founded in Texas in 2004. Recently we saw a woman charged with murder in Texas because it was believed she had actioned an abortion – fortunately a few days later the charges were dropped.

Just fifteen years ago… women in Texas had very similar abortion rights to women in the UK – many US Republican states are now rolling back women’s and LGBT rights – with one Republican candidate even calling for the execution of all trans people by way of a firing squad.

The human rights for women and girls world-wide ……are……..frankly… awful.

FGM is still widely practised in as many as 31 countries – in India around 2500 women every year suffer death by bride burning and up to half a million girls every year..don’t get the chance of life because of selective abortion – in Iran lesbians face imprisonment and lashing.

Human rights are precious but, even in the UK, we are seeing some rollbacks of human rights.

The right to protest is under threat – we have seen Black Lives Matter “politicalised” and currently the trans community …and in particular trans women are suffering an ongoing barrage of negative publicity.

So… we have much to fight for.

HOPE…. will not be enough.