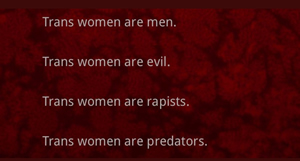 On Tuesday 26th of October, the BBC ran a story entitled "We're being pressured into sex by some trans women", which instilled rage into the trans community some of whom are involved in the toxic 'Gender War'. Authored by Caroline Lowbridge of BBC East Midlands, the story centred on trans women coercing, sometimes forcing, lesbians to have sex with them.

"You can trust the BBC" has been a strapline many of us may have seen in over the years, but more recently, this 'trust' has been in doubt. Now often 'called out' with Lord Puttman saying in Open Democracy "The BBC has got to get smart about understanding that there are quite a number of vexatious litigants out there".

Sadly, concerning Lowbridge's piece, they did not heed his words - resulting in some 20,000 people signing an open letter of complaint together with many also complaining via the BBC complaints procedure.

The 'Gender War' is perhaps one of the most toxic in the right-wing assaults on 'woke' - in short, defending those most prejudiced and marginalised people within society today. Trans people certainly fall within this category.

In consequence, trans people are well used to being under attack by the British media. Still, the BBC article came as a complete surprise. Not because the BBC published it - they turned against transgender people some time ago - it was much more about the quality of journalism, which many thought was comparable to the gutter press.

The three thousand five-hundred-word bullying rant was simply wrong in many ways.

The most significant fact ignored was that a large majority of trans women seek medicalisation, which can be compared to chemical castration.  In a recent Twitter poll of trans women, only 3% stated they did not want medicalisation typically achieved by blocking testosterone (T) and replacing it with oestrogen (E) to achieve female secondary features such as wider hips, softer skin and of course those all-important boobs. Trans women, jump through ever-decreasing size hoops to get T out of our systems and replace it with E.

Estrogen input can have other uses, too. Quietening down the odd rampant royal, for example, with The Times reporting just days ago that the Spanish secret service injected former King Juan Carlos with female hormones as 'his sex drive was a danger to the state'!

Just 1.1% of the UK population is lesbian, and the percentage of trans women is likely to be less. Maths is not exactly my strongest point, but it is a matter of common sense that the chances of lesbians and trans women meeting to have sex are incredibly low. When was the last time you had sex with a trans woman or trans man? Indeed, how many lesbians do you know? How many trans women do you know?

If this was as common as suggested, numerous stories would have quickly surfaced to back up the claims made. In fact, there have been none.

The question has to be asked why Lowbridge authored her piece and how it got past the rigorous editorial procedures that the BBC claim they undertake. Lowbridge certainly doesn’t ‘have form’ concerning stories aimed for the Gender War participants, typically authoring pieces about floods, music licences and the odd fight in the local pub. Sadly, she seems to have been incredibly naive regarding both her story's context and the sources she used.

Indeed, was she aware of Lord Puttnam's advice? I think not.

Her article centres on a dubious poll from a questionable source backing it with quotes from people who many in the trans community consider transphobic, gender-critical or at best stained.

But it gets worse.

Suggestions by the BBC that this story went through a high profile editorial process is clearly not true; (update the BBC finally took of the reference to Cade on 4/11/21).

The trans hate platforms also love to drag out the author and commentator Debbie Hayton in anti-trans stories, and Lowbridge did the same for her article. Hayton is trans but is disowned by the trans community, with 94.6% of trans people saying she "did not speak for them". Conducted on Twitter in June 2020 the poll had 1406 respondents, and another minor poll months later produced similar results. Hayton writes for Spiked, The Spectator and other anti-trans platforms, is infamous for declaring she is a man on a T-shirt and boasts of having a female passport. Confused? So am I.

Lowbridge also chose - or was she coerced by others(?) - to get a quote from Bev Jackson, co-founder of LGB Alliance. Recently LGB Alliance held a conference in London, coincidently just yards from the UK registered office of the ultra-right-wing Alliance Defending Freedom named a trans hate group by the SPLC in the US.

Jackson said this: "We know a minority, but still a sizeable minority of trans women, do pressure lesbians to go out with them and have sex with them and it's a very disturbing phenomenon."

Ms Jackson's it would appear knows nothing about the medicalisation of trans women and our inability to have sex. It was easy for her, a self-declaring lesbian who does not have go through long painful transition. She just sits in her comfy armchair throwing bricks.

Lowbridge's article continues, "LGB Alliance has been described as a hate group, anti-trans and transphobic. However, Ms Jackson insists the group is none of these things, and includes trans people among its supporters".

So, I reached out via Twitter to find those "trans supporters" tagging in LGB Alliance (LGBA) and Bev Jackson. Unsurprisingly, I have not found a solitary trans supporter - and nor has LGBA or Bev Jackson found one for me - even though between LGBA, Jackson and myself, we have over 56,000 followers. Is it any wonder LGBA is described as a hate group? At least Lowbridge got that right.

In essence, Lowbridge's story was a bullying rant against trans women with little if any foundation whatsoever. It ignored the fact that trans women are invariably chemically castrated and failed even to mention that thousands of trans women like me who have had lower surgery simply do not have "the equipment" to have sex.

To the trans community, Lowbridge's article was defamatory, grossly flawed and deeply upsetting. Clearly the BBC never edited or checked this story one bit. Stooping lower and lower and pushing text from a disgusting, horrible website.