The binary. One two, one two. A never-ending stream of just two digits.

Not male, not female - the third sex. 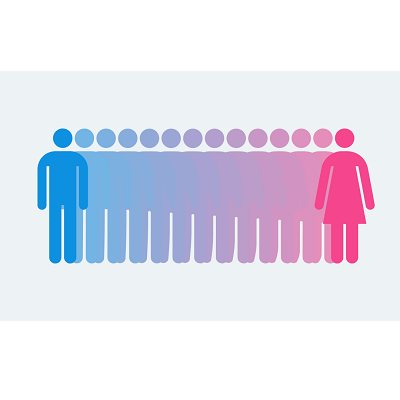 The binary. One two, one two. A never-ending stream of just two digits. And the arguments about binary in life seems to be never-ending either - because of "sex" - male & female.

I initially considered this article as a blog - but changed my mind to an editorial because I think what I am writing here is true of my beliefs - life is not binary.

And I came to these conclusions over some time and based it purely on science - introductory chemistry, physics and biology. But before I get on to that, let me first say gender and sex are different - intertwined for sure - but distinct.

And my gender is female.

Yes, I have a few "male" bits, but in the main, I am very much female and have known that for many, many years.

Gender can not be seen, of course, it is in my brain, my thoughts, my expression, my identity. And it is this fact that causes much confusion to so many people. Gender can be fluid too. And whilst I do not suffer this swing from side to side I do know others that do -  and this is normal. We dont need to "nail on" gender-just accept that it is "your true self".

Sex, on the other hand, can be seen - it is the identifier given at birth without our permission from our gender. Gender comes later as we grow, and it often does not take trans people very long before realising that sex and gender are at odds with each other.

But is sex binary? The answer is no. It is not.

I like to keep things "simple" so academics and Christians may cringe at the simplicity of this article - but why make things difficult when you can keep it simple?

One basic essential for life is water - and "pure" water has a pH of 7 right in the middle of the pH scale. Except when it gets "contaminated" the pH changes. The Dead Sea, for example, has a PH of between 5.8 and 6.0. This simple fact proves that water (chemistry) is not binary.

So moving on to physics - we turn a light bulb on and off.

It is binary. Until we contaminate it with a dimmer switch and then the degree of light changes from off to bright, this simple example of physics can be replicated many times in everyday life for example when applying a brake in a car. A brake is applied sometimes in an emergency stop but at other times in a controlled slow-down. A car brake is not on and off. It is not binary - there are many combinations of effectiveness.

And then we get to life on earth - biology.

Lumps of meat - that can be eaten by other animals just as we eat them.

And in animals, we get clues to the diversity within life, and for sure they are not all "male & female". Take Black Sea Bass, for example, they can change sex quite naturally. They are called "hermaphrodites", and there are about 65,000 other species that can do likewise.

Many come from the sea - exactly where we originated billions of years ago. Hermaphrodites have other tricks though - it is not just a matter of changing sex they can give birth - and some are sex neutral.

In other words, they do not have a "sex" at all.

At this point binary becomes meaningless - these creatures are "mono". And looking at the White-throated sparrows - four "sexes" (two types of males & two types of females). Four is not binary.

So whilst others will not agree with me (that is there right), I dont accept that there are just two sexes and that intersex people always belong in either the male or female camp. And I base this on the fact that some feel gender-neutral - and who am I to argue with them?

And when I look at my own biology for sure, I did not have female genitalia, but that is not the only identifiers of a woman. I have very small feet, narrow shoulders, feminine legs and arms, no Adam's apple and a pretty natural female voice  - not exactly very "male" is it?

And look at my images on my principal pages (Home, Story & Coming Out) - I have not had facial surgery - how "male" do I look?

Yes, hormones have improved my skin still further and given me a feminine figure, but the fact remains that I had female characteristics quite naturally from birth. Some will say these are secondary characteristics, and I will say prove it because no one knows precisely what is a man or woman is exactly.

We are all different with varying degrees of biological makeup.

So as is my right -  I say I am not a man nor a woman I am in the middle - sexless. Bang in the middle where Black Sea Bass is when they change from male to female. In the middle of the pH scale - not acid - not alkali.

The third sex or a mongrel?

I prefer the third sex.