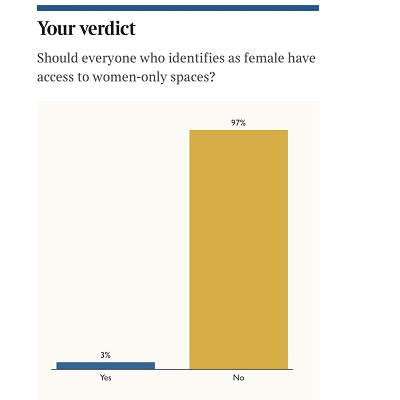 I notice today that The Christian Institute has gloatingly stated that The Sunday Times reported that in a reader’s poll, 94% of their readers were in favour of not allowing trans people to self ID.

The “poll” consisted of about 13,000 somewhat biased right-wingers stamping their opinion on trans affairs responding I suspect - to very slanted reporting.

I am somewhat bemused why The Christian Institute is taking up arms against trans people and even more surprised that they see a reader’s poll as some sort of victory for they immediately open up a very easy retort.

In 2018 the UK government asked for opinions from the public regarding the reform of the Gender Reform Act.

In case you forgot here is a link to the UK Government Factsheet.

100, 000 people responded to the consultation and of that figure a majority of people (said by government officials to be 70%)...or to put it into numbers 70,000 people were in favour of self ID.

These people did not respond to a quick click but took the time to write arguments and opinions on why self ID was the preferred route.

The Sunday Times are and always have been on the edge of transphobia and the very fact that they ran a cheap poll would suggest to me they are not looking to change any time soon.

I am not sure why The Christian Institute is getting involved with trans issues. The Gender Reform Act is about trans people who suffer the disability of gender dysphoria.

I am quite sure The Christian Institute would not for one second make the life of a blind or deaf person difficult, but it would appear trans people who also have a disability are fair game.

The Christian Institute will I am sure to pick up on this blog so could I suggest they consider asking their editor if he or she should take a refresher on Christian attitudes and at the same time go back to school and do some maths lessons?