18th of May - The Extremists 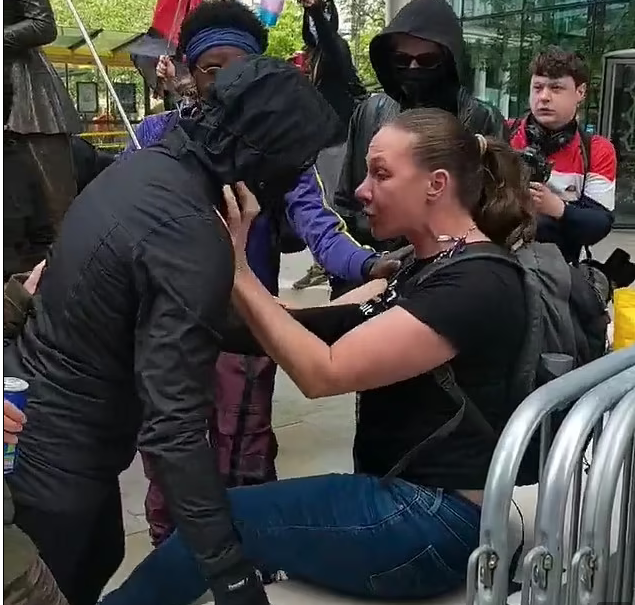 It's a known fact that one of the hardest things to sell if you are a salesman is insurance. The reason is quite simple - you can't see it.

To be a successful insurance salesperson, you have to convince the potential buyer that while everything is good at the time of purchase, a possible doomsday scenario could be just around the corner. A much more easy product to sell is a car, washing machine or a dress - tell madam she looks fab in that halter neck and it is invariably bought and paid for in seconds.

The difference is you can 'see' a dress - you can't 'see' insurance.

And that's the problem with the extremists in the gender war. The extremists on the trans side are very visual, and when they turn up at a protest, they command the headlines - invariably negative headlines.

Sadly this happens regularly - at pretty much every gender-critical event.

We saw shocking scenes at a WPUK meeting in London last year - where everyday trans people walked away in disgust because of the protest methods of a minority, saying they would never go to a protest again. And then, a few weeks ago in Manchester - again, a WPUK meeting that had more protesters than attendees. True, it was a well-behaved protest; just plain noisy, but what was the point?

Can't we promote ourselves more positively? Help out at a food bank, raise money for Ukraine refugees, and just make sure to tell everyone we are trans or trans allies?

Do we forget the words from Harvey Milk, who in the 70s was promoting gay rights? Are trans people not in EXACTLY the same position as gay folk fifty years ago - branded a danger to cishet society and in particular to kids?

And then we get to the Manchester debacle at the weekend.

Gender crit Twitter peeps reported it as "men in balaclavas". In reality, they were men and women who certainly caused some argy-bargy; I would add some called them Ninja's - but whatever their presentation, they certainly looked dark and sinister.

They occupied the space where the gender crits said they intended to meet - okay, the trans side got there first, but what was the point? Again, it just causes "agro".

For sure, Posie Parker, the organiser of the GC meeting, is also an extremist. She has strong links to the US right-wing and is named on the Hands Across the Aisle website. As we know, the US right-wing is responsible for the dismantling of Roe V Wade, the precedent for American women to gain an abortion.

Does Posie care about abortion? Haven't seen her outside the US Embassy or even a whimper from most GC leaders. Perhaps they will let us know why not?

But this is the difference the trans extremists looked sinister, caused noise and disruption -and yes, threatening.

The Gender Critical extremists look like, well, everyday people, sweet and innocent Posie, saying, "look at these trans bullies" - and get away with their threats because their threats are not so visual.

Invisible, just like the ADF, the named US hate organisation, which makes the bullets for right-wing organisations to shoot on their behalf. This hate organisation is directly responsible for women's abortion rights going out of the window and trans kids (yes, kids, not elite athletes) who can't even knock a ball around the park without a genital check specifically in Florida.

Come to that, in some states, trans kids can't even get healthcare, again, thanks to the US right-wing, ADF, Heritage et al.

Will the trans side learn?

Let's hope so - because protesting at GC meetings is unproductive.

We should undoubtedly protest, but do it when and where and when we don't look bad - like the Downing Street protest against conversion therapy where we got close to four thousand people and at least a modicum of positive publicity thanks to ITV.

It is better the GC turn up, have their meeting in peace, and leave - then the trans side comes along, clean down the pavements with disinfectant (or something much stronger) and remove their stickers.

Women, should be able to hold their meetings in peace.

For sure we dont like it, but just now, we are making a rod for our own backs!

A definition of insanity is to do the same... and expect different results.