The Finger Print of the TERF. Binary, Right-Wing Christian Transphobes. 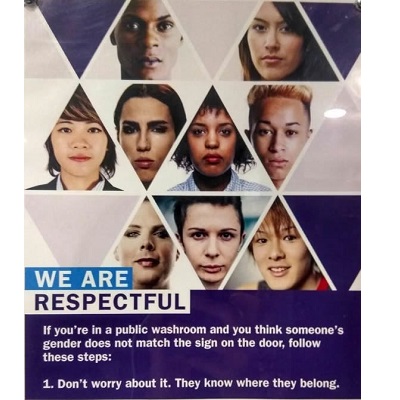 I am almost three months in now into my self-propelled career of being a trans rights activist. What has surprised me is how I have changed. In everyday life, I was once an easy-going sort of human being; taking life in its stride, just trying to make the best of every day with a smile on my face.

Angry about how the government appear to be reneging on their promises to the trans community. The reforms to the Gender Recognition Act appear to be going backwards. And mad with the TERF’s because of the lies that they spread with apparent ease and guile.

The term TERF was one that I used to frown on, but as my anger has accumulated, I have found this term to become a common word in my vocabulary.

I still reject that you can be a feminist and be radical.

Feminism, by definition, means equality. And with the TERF’s policy of trans women not being equal, these people are not real feminists.

Therefore, the feminist family should expel the TERF’s -  for their views are not consistent either with human rights or indeed with the feminist cause.

And how about the Labour Party and the TERF pressure group Woman’s Place UK? (WPUK).  The Labour party are the bastions of socialism with a historical tradition of wanting to create an equal society. So, I must wonder how a right-wing hate group have managed to infiltrate a left-wing political party and to date have not been dealt with accordingly. Woman's Place and many of their members pretend otherwise saying they are of the left. I will deal with this pretence in another Editorial.

There is a very distinct fingerprint in the TERF camp.

Either politically right-wing -in many cases extreme right-wing. Or right-wing of the Christian church.

Both Jen (my wife) and I were once very regular churchgoers.

We were married in a church even though we had previously been divorced. Our church forgave us of this sin, and it meant a lot to us.

But as time went by, we realised the politics in a church was not consistent with how we wanted to live. They would argue about what hymns to sing on a Sunday, and the sexual affairs between some church members just did it for us.

Just how some people could purport to be a Christian, sing hymns on a Sunday and knock off their best friends church-going partner on a Monday may not be accurate in every church… but it was in the church we attended.

So, we started to go to another church. We were entranced how some members would talk in tongues and felt we had arrived at our church home. And then one day we heard “that sermon”.

It wasn’t a sermon; it was a homophobic hate speech.

From that day we have not gone back to any church. We are spiritual yes - but not tied to any religion because from what we saw, these people did not hold a candle to our ethics of morality.

Reverting to the Christian TERF’s other bedfellows, the politically right-wing - here again, the fingerprint shines through for they are for the most part apparent female academics with a massive chip on their shoulder.

For real women are nurturing souls who care about everyone. Yes the TERF’s may well have the right biology to be a woman … but in the head?

Everyday women just do not think like female TERF’s.

When I have explained the TERF war with female colleagues at work every single time, they have expressed the view that TERF’s most certainly don’t represent them.  In fact, they become somewhat ashamed that people of their gender hold such draconian and transphobic opinions.

TERF’s claim they are at risk from trans women when going to women’s places …meaning a loo of changing room.

Everyday women do not consider they are at risk from men when going to the loo because they know full well men assault women in dark lonely places, in the park or in the most commonplace of all - in the home.

Men abhorrently, sexually assault women pretty much everywhere except in the loo. And 99.9999% of the time they don’t pretend they are trans when they do it.

I am still to work out all of the common denominators of the academic TERF. The Christians are easier – binary and the teachings in the bible. The one question I would ask them is just who edited the bible for over many thousands of years?

For surely things have been lost in translation, and someone decided that some book or other was not suitable for publication in the bible, while others should be included. There has to be an editor of the Christian bible and was his or her views slanted?

I think trans people cause Christian websites like ‘The Christian Institute’ and ‘The Christian Trust’ a real dilemma. They are never particularly nasty, but they are certainly a mouthpiece for TERF ideology.

So, when will you start to make peace in the TERF wars instead of taking sides?

Does the bible not teach love?

Did Jesus not say, “love one another”?

The academic TERF’s are more of a mystery because here we have lecturers and writers with less of a history than the Christian TERF.

My belief is they are purveyors of misandry – men haters.

These women may possibly have a male-identifying partner and while publicly not declaring it, hate men for their perceived superior role in society.   I suspect, therefore, in their closeted world, they see a trans woman as the lowest form of life - in other words, a man in a dress.

To some extent, I feel sorry for the academic TERF because their life revolves around hate. They bang on about the same things time after time, and this policy has succeeded in government ministers taking note.

But what the academic TERF and indeed Christian TERF fails to do is offer solutions.

This is particularly worrying concerning the academic TERF as here we have a very bright human being (I am reticent in using the word woman) able to climb the academic ladder to high positions in their fields.

The trans community know what their concerns are for the TERF’s have been loud and clear here, but solutions acceptable to both sides? No, this doesn’t happen.

I find myself arguing their case when it comes to prisons and refuges. But these places are protected by the 2010 Equality Act. And when the Gender Recognition Act consultation was launched the government made a very firm written promise that the Equality Act was not being changed either in favour of the trans community or indeed of the transphobes

Ultimately, I do feel it is for the TERF’s to bring forward new proposals because the Gender Recognition Act is about trans people, not TERF’s or indeed women as a sex or gender.

I read some time back that Ruth Hunt now Baroness Hunt of Bethnal Green said when you talk to TERF’s, there are many points we are not too far apart on. Well, if that is the case, why are these conversations held behind closed doors instead of diffusing the TERF war?

I would love to get into a conversation with a TERF personally.

I know I am just one trans woman that has no authority whatsoever other than this website belongs to me, and I can write anything reasonable without fear of prosecution. Freedom of speech is a benefit in a civilised society.

So, the standoff remains and because compromises are not brought forward by either side - hate manifests itself into an ever-increasing problem.

Our world just gets darker every day, and this is very sad.