The Malta Report: Abortion and Trans Self Identification

A special report on my trip to Malta 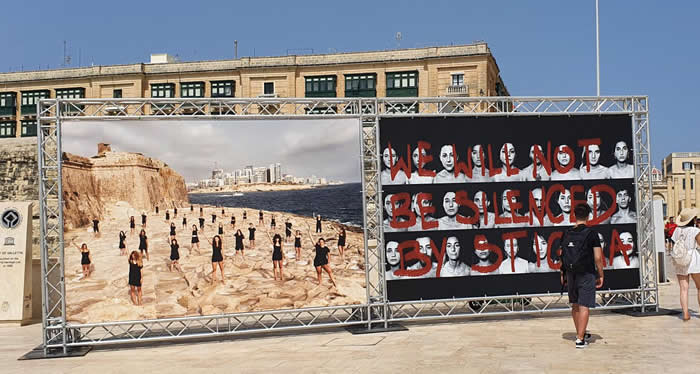 Malta is a small island located just north of the African coast and south of the Italian island of Scilly; it has a population of around 430,000 people. One of the first things you notice when visiting is the substantial British influence in language (everyone speaks English), the fact that they drive on the left and that they even retain British style three-pin electrical plugs!

But two aspects of life that are very different is that Malta has a 100% ban on abortion and allows trans folk to self-identify in regards to the Maltese version of a Gender Recognition Certificate (GRC).

Indeed, the exact reverse of the UK.

The issue of abortion in Malta is controversial but talking to the many locals on my recent visit, it became clear nothing is likely to change any time soon. This, despite activists shouting from the rooftops. The reason is simple, many in Malta are deeply religious with up to 50% of the population often going to church.

Going shopping in Valletta (the island's capital), I could not fail to notice the ground level double billboard protest (pictured) together with these words of explanation.

Why are we the last EU country with a complete ban on abortion? Why do women seeking abortions continue to suffer when such a choice is a human right? The topic of abortion is a largely unspoken topic, censored by the state, the church and a threat of criminal prosecution. It is a social stigma that is silencing Maltese citizens who support the right to bodily autonomy.

44 individuals have stood together in unity and raised their fists in a strong statement against the criminalisation of abortion by holding [clothes] hangars up high.

The hangars serve as a symbol of the suffering faced by women in Malta who have been forced to resort to unsafe methods to obtain an abortion, which is a safe and accessible procedure in most countries across the globe. There was a strong and collective presence that day; everyone felt the same sentiments of both anger and sadness; however, they were unified by the need for change. It was an emotional sight seeing so many people gathering together with the same thoughts on such a stigmatised topic.

It is our hope that people will recognise how inhumane it is to legally bar women from having an abortion in a country where women are forced to give birth, regardless of their mental or physical health.

Strong words - published by the Maltese "Women's Rights Foundation" - I stand in total solidarity with the 44 women and men willing to stand up for womens rights. Seeking further information, I learnt that around 300 women have to travel, often to Italy or the UK, for an abortion every year. That is pretty much one woman every day.

But my trip to Malta was a three-pronged visit. For sure, I wanted to find out about the abortion ban. Still, I was in Malta to witness and celebrate an exceptional wedding and find out about the thorny subject of self-identification and the Maltese equivalent of the Gender Recognition Act.

There would be no gender war had the Tory government dealt with this issue swiftly and promptly as initially promised by Theresa May. They didn't, and this gave the gender-critical, scaremongers, the Christian extremists such as the ADF and perhaps some with genuine concerns (that could easily have been allayed) a chance to rally and group, causing, in the process, misery to many thousands of trans people like me.

Just 5000 trans folk have a Gender Recognition Certificate (GRC), this being spread over 17 years and even I, who have been on hormones for the best part of a decade and had surgery over two years ago, do not qualify for one. If only I lived in Iran (not a good example, I know), where after surgery, documents are changed pretty much overnight!

Yes - we are that far behind!

But what of Malta?

I spoke to Gabriella Calleja Wikipedia say this about her:

Gabi Calleja is an LGBTIQ rights activist in Malta. She read for a Masters in Youth and Community Studies at the University of Malta. As of 2010, she is chairwoman of the Malta Gay Rights Movement. As of 2014, she is co-chair of the Executive Board of ILGA Europe, a lesbian and gay advocacy group.

Gabi is also part of the Maltese government and was clearly well clued up. She told me that since self-identification had become legal in Malta, just 143 trans folks had changed legal identity, and this was number was split equally between trans men and trans women.

"Any problems in regard to womens single-sex spaces?" I asked - "none at all" she replied.

"Any problems at all"?  I replied

"Well, on very rare occasions, but not for trans women, actually trans men when in the early stages of transition" Gabi said. It appears some local men objected to trans men going into a local 'men's bar', for example. Patriarchy?

From what Gabi told me and from the many locals I talked to it appears being gay in Malta is more of an issue than being trans - again the reverse of the UK.

But let's project those figures to how they might look in the UK if we had self-identification (sometimes referred to as SELF-ID) in regards to the Gender Recognition Act 2004.

What do they tell us?

Surely 143 is an exceedingly low number which either means our estimate of 1% of the UK population being trans is an overestimate or in reality, few Maltese trans folks care about a GRC given it is readily available.

So let us do some projections. Maltese population 430,000 and over six years issued 143 GRC's split equally between men & women.

The population of the UK is 66.65 million - precisely 155 times larger than in Malta.

Now I am not the worlds greatest estimator but put in a nutshell, self-identification would increase the number of GRC's issued in the UK by about tenfold.

Now many gender-crits would argue that they dont wish to deny genuine trans folk of a GRC, their fear is that a sex offending man will identify as a woman to access single-sex spaces (SSS). The Equality Act covers this remote possibility pretty well - men dont need to wear dresses to attack women - they do it pretty damn regularly in the home every day. The simple fact is that nineteen out of every twenty women killed is murdered by a man she knows.

I know only too well about this fact - to date in our #EveryThreeDays campaign I have written about the murders of over forty women, and come to the end of the campaign that figure will exceed one hundred and twenty. In consequence, I remain gobsmacked that there is so much crap thrown at trans folk in the media but rarely do they call out domestic violence - the proven source of violence against women and girls.

But what of trans folk - after all, it is OUR LIVES!

Do we trans folk want self-identification (note - 'SELF-ID' - just to be 100% clear, used in this context 'Self ID' in fact refers to the Reform proposal to be able to use 'Self Declaration' in order to obtain a GRC, which has nothing to do with any reference to Self Identification that we already do legally in our everyday lives)

After all - genitals give no clue to sexuality or gender identity!

I honestly believe if the Tory government allowed Self Declaration tomorrow, it would not make any difference to women. They would not be put in danger; their sex would not be eradicated. We are a tiny percentage, possibly even less than 1%.

But not all trans folk want self-declaration, though I suspect, a majority do.

Some want our challenging journey (which we had no option to take so to maintain our sanity or often our lives) to be recorded for our kids and grandkids - some want to say there is nothing wrong with being trans, but we did X or Y to make things right.

So, to be honest, whilst I have no objection to Self Declaration personally I am equally not opposed to there being an acceptable threshold so as not to make it look 'too easy' - to give my journey (and others, especially those already with a GRC) some 'value'.

So the qualifying requirements need to be fair and realistic but not act as a barrier that prevents and discourages genuine applications. Surely if someone is willing to put their body on the line to achieve their correct gender that is enough?

But equally, the gender-critical need to dramatically ease off and start to be much more understanding and reasonable about GRA reform.

Because currently in the UK, the case is, only 1% of trans people have a GRC and this clearly indicates something is wrong!

The Gender Recognition Act is NOT WORKING and the 'terf war' will not end until it does.

And more to the point - injustice stinks.