In a century what will people think of Raymond, Truss & JKR 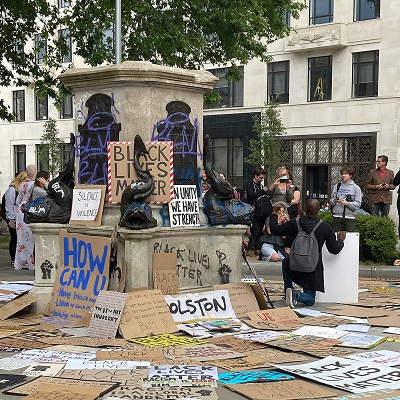 In 1895 about 180 years after his death, a statue to Edward Colson was erected in Bristol. He was a massive benefactor to the city of his birth, founding almshouses, donating money to schools, churches and hospitals. Streets and buildings are to this day named after him but in the summer of 2020 something happened. The murder of George Floyd by a police officer put the Black Lives Matter campaign into top gear, and Colston represented something none of us can stomach. The slave trade.

Opinions can change overnight, and while I dont foresee the opinion of society towards trans people changing that quickly I wonder where we will be on one hundred years? I am sure we will be accepted in society much better. When I look back at perhaps a TV programme like Startrek which initially broadcast some thirty years ago, what was 'sci-fi' in the 1990s is starting to come true. Will men and women be fully equal in 2121? Will we dress the same? Who knows. But in one hundred years, society will look back and "judge" people like Janice Raymond, for example, the woman who without a shadow of doubt started the terf war. History is already beginning to frown on her. Now in her 70s, Raymond said some evil things about trans people.

Now I dont mind people criticising other people when their thoughts or actions affect other people's lives. For example, Colston was complicit in capturing black people, transporting them across the Atlantic ocean to work for nothing and be beaten, raped and tortured.

Trans people, however, can not help being trans. It is not a choice we made willingly for sure. For medical science is yet to fully unravel why we were born trans. We know of course that trans folks brains are different to cis and that it occurred during the early weeks of pregnancy. Unlike Colston or Raymond, though, we do not have a choice of how we live life - nature made us this way. And in one hundred years, people will understand us much better -why we are trans.

And there will be no blame.

So who will history look back on and put in a bad light?

There are others, of course. Lisa Littman who has made a vast 'song and dance' about Rapid Onset Gender Dysphoria has been heavily criticised about the source of her research and proper controls. Blanchard too has been criticised for lack of appropriate controls in his research. He seems paranoid to link trans people to autogynephilia seeming to forget that once a trans woman is on hormones, we invariably become chemically castrated within a short time. And if like me (and many others) they have had an orchi we become eunuchs of sorts - traditionally in history the guardians of women in a harem.

Indeed, if I were a cis-woman in a harem and had the choice of me or Ray Blanchard to guard me, there would only be one winner, and it is not him!

The list dont end with Raymond, Littman or Blanchard though. Liz Truss (the UK's Women and Equalities Minister) can be put in the frame to be a villain in a century. She had the opportunity to reform the Gender Recognition Act but so far has failed. After a public consultation that substantially supported trans folk, she flouted democracy deciding to ignore the voices of over 75,000 people favouring about 25,000.

And then we get to that most famous author J K Rowling. I dont know if her books will be still popular in twenty years let alone one hundred but as far as trans folk are concerned, she is not exactly popular. In fairness, I did not feel her infamous tweet of December 2019 was transphobic, but it certainly upset an awful lot of people. Then JKR wrote a very long blog in which she said something that is rarely mentioned in our press that likes to create hate. JKR wrote:

"I believe the majority of trans-identified people not only pose zero threat to others but are vulnerable for all the reasons I’ve outlined. Trans people need and deserve protection. Like women, they’re most likely to be killed by sexual partners. Trans women who work in the sex industry, particularly trans women of colour, are at particular risk. Like every other domestic abuse and sexual assault survivor I know, I feel nothing but empathy and solidarity with trans women who’ve been abused by men".

Personally, I think that is pretty fair compared to what people like Debbie Hayton says. You can read the full JKR blog by clicking HERE.

That said what worries me about JKR, in particular, is she also writes in the name Robert Galbraith. She seems to believe it is acceptable to swap gender to make money, but when it comes to trans women who by an act of God had no choice but to live life initially as a male, we seem to get demonised. But am I being unfair?

And then we get to that actual name 'Robert Galbraith' just add on one more name, and we get 'Robert Galbraith Heath.' Google says this about him: "Robert Galbraith Heath was an American psychiatrist. Heath followed the theory of biological psychiatry - that organic defects were the sole source of mental illness, and that consequently, mental problems were treatable by physical means". Yes - he was a founder of conversion therapy implanting electrodes into peoples brains and using drugs on prisoners in US jails.

If JKR has explained why she uses the name Robert Galbraith, I am not aware of it, but this link from Heath to Rowling is very unpalatable. JKR can you explain?

So in a century, what will society make of Raymond, Littman, Blanchard, Truss and Rowling? These people that arguably have persecuted trans folk simply because we are are transgender.

Will society look back at them as we look back on Colson now as not someone who did good - but someone associated with evil. If Truss or Rowling get a statue, will it be torn down as what happened to Colson's?

I dont know, but my feeling is Truss has done much more damage to trans people than JKR.

And if and when appropriate we replace the word "trans" to "black" in the biased 'academic' studies from TERF's suddenly the context of what has and is written about us changes dramatically, and one word immediately comes to the fore.