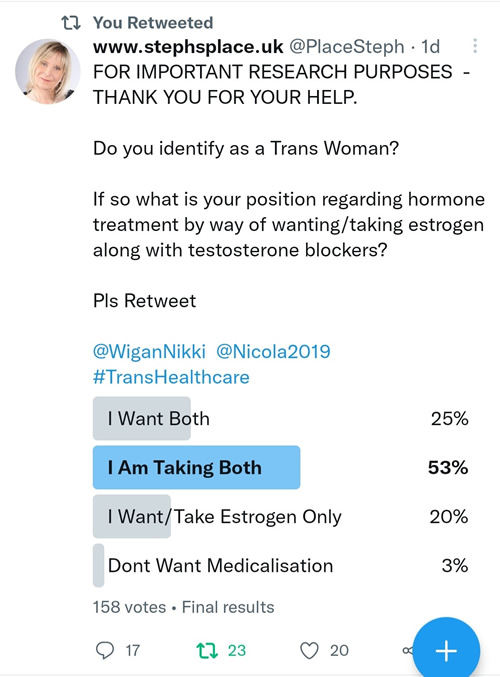 If you are transgender, the issue of trans healthcare is invariably a concern.

It's often a fight to be understood and get empathy from your GP - many of whom will not prescribe hormones, and indeed some even refuse to make a referral to a Gender Identity Clinic (GIC). On occasion, just being "trans" can result in exclusion from any healthcare at all.

The demand for hormones has always been a priority both for trans men and women - we desperately want to swap places - oh, how 'nature' let us all down!

But I wanted to find out just how many trans women wanted medicalisation, so I tweeted out a poll at the back end of October asking my trans sisters the question.

And in all honesty, I was stunned by the result.

All but 3% of us seek the holy grail of medicalisation. Nor was the number of respondents small; 158 trans women cast their vote - nearly double the number the BBC based an article on, in that 'sex with lesbians' charade story!

If you are trans and seeking hormones, I can almost certainly promise they will help considerably and achieve some peace.

But what were the full stats?

Well, an astonishing 53% are already taking Estrogen combined with Testosterone blockers, probably most via the NHS, but we should not rule out private healthcare or self-medication. Another 25% are seeking the same treatment making an impressive 78% of trans women all going the same route. 20% stated they want or take Estrogen only.

What does that mean?

Well, most likely, they, like me, have had lower surgery so no longer have the ability to produce T. Or possibly some may have some underlying medical condition, which means they can't take blockers. Indeed, one of my Twitter followers messaged me saying she wanted to take both hormones and blockers but was unable to take either because of this problem.

The poll certainly goes a long way in proving that trans women seek medicalisation and are happy to accept the potential risks of kidney and liver issues and the chances of dying sooner, though the jury is out if that is specifically to do with hormones.

In short, it is about quality of life.

For those of you not medicalised, blocking T and introducing E is for many of us a lifesaver and if you are waiting - don't get despondent we have all been there. Still, medicalisation is not for everyone, especially those folks who edge towards non-binary. And for sure, as mentioned, there are pluses and negatives.

The pluses for trans women may include contentment, physical changes in skin and body shape etc. The negatives,  weight gain, specifically around the waist, often feeling the cold, significant loss of strength and stamina. But there is one more significant loss that totally debunks Ray Blanchard's grotesque theories of Autogynephilia (also known as AGP) - and that is the loss of libido, often total loss, including the ability to get an erection.

Do I miss sex?

Not in the slightest.

And one more bonus, if you have prostate issues, taking estrogen and blocking T, will almost certainly, help.

But for all the negatives - ask any trans woman currently on medication if they would consider dropping hormones and the chances are you will get a pretty robust "NO" and for those who have had lower surgery that option does not exist - we will always be on hormones.

There is a God!

And having sex with Lesbians - LOL