Transcript of LGB Alliance's Video Submission to EHRC Board Briefing 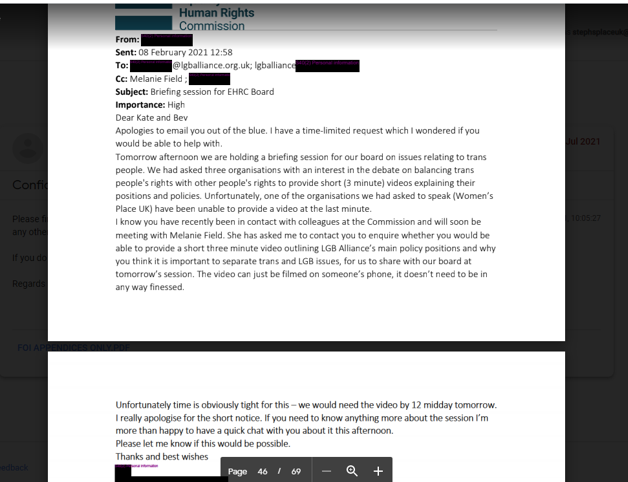 This article includea a full transcript of LGB Alliance's video submission to the Equality and Human Rights Commission Board Briefing in February 2021.

This was compiled using several different software packages for comparison, and manually verified as to accuracy.

Content Warning : A copy of the video can be found here.

How many factual inaccuracies can you spot?

Well, we started LGB alliance in October 2019 because we had both separately tried to persuade Stonewall to talk about the direction they've taken, which we thought was quite wrong. I had been a founder member of the Gay Liberation Front way back in 1970. And you had been active in Stonewall for decades.

Yes. That was frustrating. Bev and I hadn't met. But separately, we'd been trying hard to get Stonewall to talk.

We could see that lesbians were being ignored, excluded from LGBT groups, unless they agreed that men could identify as lesbians – ‘identified’. And we were also being vilified as TERFS and transphobes.

Sadly, Stonewall stuck to their mantra, no debate.

And this was not about trans rights. It was about pushing the belief that everyone has a gender identity.

By the way, LGB Alliance fully supports the rights of trans people to protection under the law and social acceptance and trans supporters have attended our meetings and continue to support us.

Neither of us thought that no debate was an acceptable position.

Stonewall wanted to achieve the biggest social change in millennia to say that feelings of gender identity were more important than biological sex, and that there should be no public discussion on this.

So we started the LGB Alliance because we believe in freedom of speech. But that's just one element. What are our other main policy positions, Bev?

Well, as you said, of course, freedom of speech is absolutely key.

We believe we ought to be able to discuss what gender identity is.

It's not a scientific thing and just disagreeing with gender identity, or even just talking about it, is called transphobic, and that's just a way of blocking discussion.

In fact, in Scotland, there's a hate crimes bill, which is trying to get through Parliament, which would make it a crime to discuss the kind of things that we want to discuss.

Obviously, we're opposing that, and I think it's really dangerous to make this kind of discussion into a hate crime. So that's the first thing.

The second thing is about relationship and sex education at schools.

And we agree with the Department for Education, which recently pointed out the importance of making sure that all education is based on facts.

So kids need to learn about biological sex and what happens at puberty and so on. The difference between girls and boys.

And they shouldn't be taught that if a boy is rather so called girlish, but he might be a girl.

Unfortunately, this sort of thing is being taught by groups. We have to make sure that schools are keeping to the Department for Education guidelines.

And the third thing is about medical experiments on children.

We'd like to refer you to the Kiara Bell case and the ruling of the high court.

We don't need to go into much detail about that, because Alistair Henderson on your board will be able to explain all about it.

But one of the things we discovered when we started off was that we realized that both of us were the kind of girls who were tomboys who would have actually wanted to transition which would have been desperate to transition if we'd been growing up now.

And this is quite horrifying.

It leads to a life of infertility, loss of sexual feeling, continuous medication and appalling surgery.

We're so glad that we were not growing up in this kind of ethos which we have today. So that's the third thing.

The fourth thing is the seat at the table.

We represent thousands and thousands of lesbians and gay men and bisexuals who don't hold to this belief in gender identity.

Unfortunately, all the other LGBT groups do. So it's really important that we get representation and that our views are heard whenever anything about LGBT issues being discussed.

Yes, and now I'm going to hurry you up. Why do you think it's important to separate LGB and trans issues quickly?

Well, LGB is about sexual orientation.

It's about women who love other women and men who love women that's known all over the world and in fact, it's criminalised.

But in Iran, for instance, where you could get a death sentence from being homosexual, you can get out of it if you agree to go through a sex change.

There's a lot of homophobia involved here. We really need to discuss this. It should be a public discussion.

Yeah. And you could say why was the T added to the LGB?

Because that's what happened in 2015.

Stonewall followed the example of the US.

Why was the T added to LGBT? Ccould we please book about an hour to talk talk to you about that?

The real question is not why it should be separated but why was it ever linked?

Bev thank you very much.

Your time is up, EHRC.

We hope we've explained our thinking in the brief.