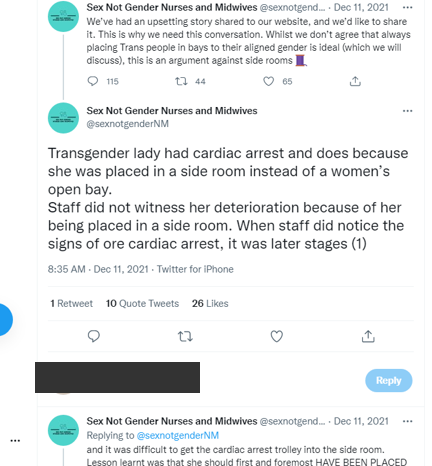 In December of 2021, I made ten Freedom of Information Requests to NHS Hospital Trusts spread across England. There was just one question:

Under the Freedom of Information Act, please could you supply the following information relevant to the period 1st April 2020 to the 31st March 2021:

(1) How many natal female inpatients complained that a trans woman inpatient was being cared for in the same ward?

Some foundations replied within a couple of days - but others took much longer. I blogged about this issue earlier this month, demonstrating my initial findings together with a copy of the reply from University Hospital's Birmingham NHS Foundation Trust, by far the largest Foundation Trust I requested information from.

Still, the positive news for trans women is that now seven of the ten Foundation Trusts approached have now confirmed that they have had no complaints and that one has stated their systems are not set up to record any complaint; the implication being, they have never even considered this a potential issue.

To date (22/1/22), two Foundation Trusts (St Georges, who operate with 1000 beds and Birmingham Women's, with just 220 beds), have failed to respond within the required 20 working days.

Now a quick note here - some foundations have more than one hospital, which may not be included in these figures.

According to the King's Fund, the average stay in a hospital is less than five days, so in principle, these hospitals could have up to 906,952 inpatients over a year.

Not far off one million patients and based on the replies received back not a single complaint that a trans woman was being cared for in a hospital ward designated for women.

I have also been able to trace a few trans women who were inpatients in hospital, and all but one had a positive experience. All health professionals in hospitals, in particular nurses and doctors, work under extreme pressure - generally deliver an excellent service and are grossly underpaid.

At the same time as I launched my investigation Julie Miller one of the co-editors here at Stephs Place, did her own investigation. Julie is an ex-army officer and now a Governor of Hampshire Hospitals Foundation Trust.  Hampshire Hospitals say they have some 600,000 patients per year and operate four different hospitals including those at Winchester & Basingstoke.

Are there any complaints within Hampshire Hospitals that trans women occupy beds as per their gender?

No, of course not - not a single complaint.

Because there is a recorded incident that a trans woman died in a side room when she should have been on the main ward.

And of all people to report, this was "Sex not Gender Nurses and Midwives" - a gender-critical group who we would all expect to hide such information.

So much respect to them for reporting this; they obviously appreciate that all lives are precious, including trans ones.

Sex not Gender Nurses and Midwives tweeted this thread on December 11th 2021:

We’ve had an upsetting story shared to our website, and we’d like to share it. This is why we need this conversation. Whilst we don’t agree that always placing Trans people in bays to their aligned gender is ideal (which we will discuss), this is an argument against side rooms

When staff did notice the signs of ore cardiac arrest, it was later stages and it was difficult to get the cardiac arrest trolley into the side room. Lesson learnt was that she should first and foremost HAVE BEEN PLACED IN AN OPEN WOMENS BAY where her deterioration would have been recognised and earlier interventions could have saved her life

She posed absolutely no threat to anyone, she presented and identified as a woman but staff put her in side room simply because they knew she was transgender and didn’t know what else to do. She died because of ignorance and thoughtlessness.

Everyone needs us to talk about this, and in a way that accusations of bigotry aren’t fired around. People’s lives and well-being depends on it. Thank you, to the person that submitted. And a reminder- we started this account because of poor outcomes for Trans people, too.

Their Twitter thread says, "This is why we need this conversation" - and so yes, let's talk - Sex not Gender Nurses and Midwives.

I am more than happy to talk to honourable GC people and obviously, both you, myself (and others) are very concerned that a life has been lost - and to be clear I fight for women as well as my community.

However, should that have been me in that side room, to be honest, I am not certain I would complain. Being on the main ward is not great with loads of disturbances -  bells and buzzers sounding - people shouting "nurse".

So frankly, in most circumstances (but not life or death ones), I would prefer a side room, not because of my sex or gender but because of the privacy and peace a side room offers.

And equally, I can understand that cisgender women also want privacy & dignity when in hospital, often preferring female nurses and doctors especially in regard to 'intimate area' health concerns.

However, for trans women, we have additional issues.

Put simply, trans women don't want to go where we are not wanted, (me included), and I suspect trans men feel the same, not that they get the same level of hatred and abuse that trans women do.

So, on the 30th November 2021, I asked this question via Twitter to trans women:

So you are a trans woman and are in what is deemed as a single-sex space. It is obvious the women around you are not happy you are there. What do you do?

And I can understand that. Who wants upset, embarrassment and confrontation?

And then we get to another Twitter poll, this time tweeted out by Transness.Com on the 21st December 2021.

Trans women, when would you accept being admitted into hospital?

Just 54% said when a health professional told them so.
25% said when it's life and death.
12% said when they were unconscious,
8% said they would have to be sectioned first.

Being trans causes us issues - many of us deny our sex assigned at birth, meaning we often ignore health checks and screening and for sure, that costs lives. I know of two instances where trans people have lost their lives because they denied "sex"- sadly one being the brother of the deputy speaker of the House of Lords.

Transgender people are twice as likely to die as cisgender people, according to a long-running study published in the Lancet Diabetes & Endocrinology on Thursday, a difference researchers said underscores the need for improving social acceptance and medical care for trans people.

The increased risk did not fall over the almost five decades studied between 1972 and 2018, according to an analysis of medical records from nearly 3,000 trans women and more than 1,600 trans men treated at the Amsterdam University Medical Center, which treats around 90% of trans people in the country.

What I find particularly disturbing is that people sitting in high places - such as the House of Lords - appear to wish to make trans healthcare, and indeed survival, already worse than it already is.

Lord Blencathra has proposed the bill amendment, and it is sponsored by Baroness Emma Nicholson - both have a history of being "trans hostile".

This time they are attacking trans rights, proposing amendment 297G to the Health and Care Bill.

The amendment is below, and no doubt will be backed up by a Gender Critical astroturfing campaign to get it 'trending' on Twitter.

As I have clearly proven in this article, there is no justification to bring this amendment.

Copies of all my Freedom of Information Requests are available to journalists and any member of the HoL or HoP - simply email stephsplaceuk@hotmail.com.

Trans people are already worried about taking part in scans and going to hospital - many are even too scared to leave their house.

Do women really want to share hospital wards with trans men with deep voices and beards? I am damn sure trans men would have something to say about that.

As a trans woman, I know exactly what I think about this proposal.

Is this amendment not an abhorrent affront to transgender human rights?

Lord Blencathra and Baroness Nicholson have also requested another amendment (297F) because they don't like the word "transphobe".

So are Lord Blencathra and Baroness Emma Nicholson's proposers of these amendments prejudiced against trans people?

I rest my case.