Gender-critical lies in regard to GRA reform & single-sex spaces 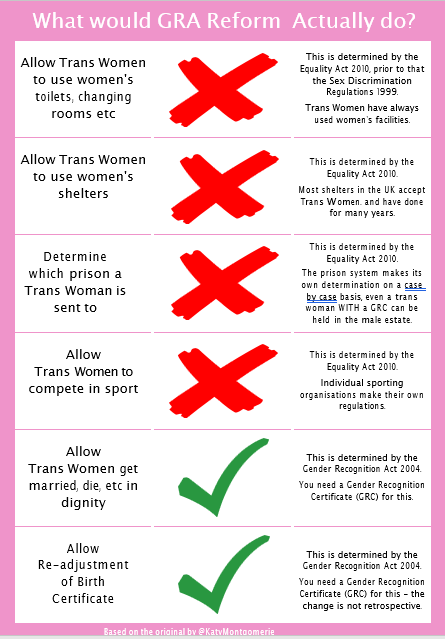 The conflation of the Gender Recognition Act 2004 (birth certificate) and the Equality Act 2010 (single-sex spaces) is a tactic to create transmisogyny. There is no excuse for journalists and politicians to fall for this discourse unless they, too, are transphobic.

So I tweeted on Friday the 24th of September - but why?

Sometimes we need to reflect on what is going on, to think again at what is happening, and the simple truth is that if we are told a lie often enough, we all start to believe it. That red bus, for example, that told us by leaving the EU, we as a country would be better off to the tune of £350m per week. And where was the money going - oh, to the NHS!

But it was a lie - all lies, which hopefully people will remember when we go to the ballot box. Tories, well, most of them anyway - cant be trusted. And indeed, even Labour ones like Rosie Duffield.

Like so many other gender-critical politicians and journalists, Rosie conflates the Gender Recognition Act (2004) and the Equality Act (2010).

The Gender Recognition Act (GRA) was introduced to enable trans people to identify as their gender/sex legally. I say gender and sex because, in our laws, they are interchangeable terms. For me and thousands like me, the reform of the GRA is very important. It is estimated that just 1% of trans folk have a Gender Recognition Certificate and it is for that reason Theresa May took it on herself to reform the GRA.

But it all went very wrong; her position as Prime Minister was under pressure, and of course, there was Brexit. Trans rights went down the toilet - rather like dear Theresa after the right-wing of the Tory party caught up with her.

I dont know who started the scare stories that GRA reform would mean single-sex spaces were at risk if the GRA was reformed, but they have certainly succeeded in their goal - now even a Labour Party MP believes it!

The GRA has NOTHING to do with single-sex spaces NOTHING.

We all self-identify what public toilet we use; we all analyse whatever situation we find ourselves in and make choices. We consider ourselves and others. Single-sex and safe spaces are required at specific times - LGBT+ folks know this because gay and trans people have used them for decades.

Unlike the Gender Recognition Act, the Equality Act works, and we know this because of the lack of legal case law - particularly case law involving trans people.

So I come back to the fact that politicians and gender-critical journalists are conflating the two acts suggesting that single-sex spaces are under threat when they are not.

Is it the case that the lie has been told so many times that even some trans people believe it?

Reform of the GRA is proposed for just one reason - to be kinder to a marginalised community and repair a law that does not work.

Single-sex spaces are not under threat, and the only other reason gender-critical people say that is - put simply - transmisogyny.