What an idiotic thing to say Rosie Duffield - only women have cervixes? 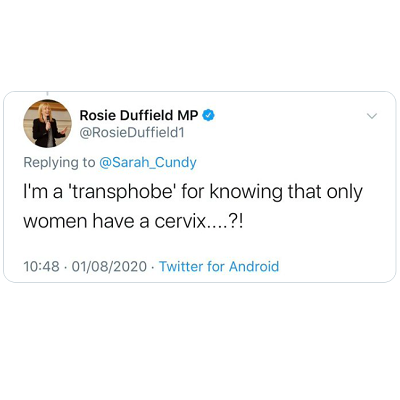 I recently joined the Twitter community using the handle @PlaceSteph. I have been warned to expect loads of hate messages which I don't mind because if the transphobes, TERF's and gender-critical are hating me, it means I am deflecting the hate from others. Unlike some battered souls, the haters will NOT break me.

I am not one for social media - I am a novice - a fish out of water. I don't know what I am doing technically, but I know I have a message and I know right is on my side. I know in the end the trans community will win just as our LGB siblings are close to winning.

The sad part of Twitter is that there are some less informed who makes trans lives more difficult. J K Rowling is, of course, the mouthpiece for transphobes who think with their genitals and she has a mighty voice.

Gender erupts from the brain. The transphobes do not get this.

Trans folk are only too aware our genitals are "not right."  I call this "Genital Disability."

Trans folk suffer a genital disability because genitals do not match what the brain tells us is right for us.  Going forward, I am going to refer to this as SGD (Suffer Genital Disability).

We don't need people to call us out because we suffer SGD - it is cruel.

But yesterday a serving MP did precisely that - worse still she is a Labour MP her name is Rosie Duffield MP for Canterbury.

Rosie is no stranger to controversy, but I forget all that. Her tweet said, "Only women have a cervix" - what an idiotic thing to say!

My wife does not have a cervix. She has suffered both pancreatic and ovarian cancer and had surgeries for both.  She lost her cervix eight years ago, but she is a woman Rosie.

I have SGD for a lifetime, but my estrogen levels are bang on the "average woman" and much higher than a post-menopausal woman. To be exact, my recent blood test revealed an estrogen level of 165 pg/ml (picograms per millilitre) slightly down from my highest reading which was 185 pg/ml. And my testosterone levels are even lower than an average woman at 6.0 ng/dl

And how about the Intersex and non-binary Rosie? How do you think some of them may feel after what said?

And the trans-men? Do you think they want re-minding that they may still have a cervix?

In short Rosie Duffield has insulted many women who have had a total hysterectomy, trans men, trans women, non-binary and intersex folk.

You are a disgrace, Rosie Duffield.

In one tweet you suggested you would quit and go and work in the media. That may not be a bad idea.

Donald Trump may well give you a job as a press secretary or something - he likes people like you.