Vicky is one of the first to be treated at Indigo...here is her story so far 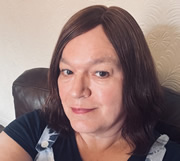 Ask any trans person, and they will tell you that trans healthcare is in disarray.

Not so much general medicine: most GP's will treat the 'run of the mill ailments' no problem. But getting hormones? Then many GP's take fright (wrongly, of course) and refer their patient to a Gender Identity Clinic (GIC).

However, there may be complex cases that GIC's need to be involved in, and of course, a specialist is required when it comes to surgery. The problem is waiting times to see specialists at GIC's; they can be up to six, (yes, you read that right six) years.

Recently my colleague Claire worked out how long the queue at the London GIC is.

In terms of time, they say about three and half years for the first appointment. If we formed a physical line (which both Claire and I are in), it would stretch some seven miles taking into account social distancing. And, in part, because of Covid, if we consider current real-time appointment rates, (when people are actually seen) – neither Claire nor myself will see a specialist at the London GIC we are registered at for another TWENTY-SIX YEARS!

Our trans activist friend Vicky Hodges was in a queue too - but at Sheffield GIC. She started to queue in December of 2018 and was not expecting to be seen until early 2022, but things changed as part of a pilot programme announced by NHS England a year or so back. Called project Indigo this pilot is for trans folk who are over 18, are registered with a GP within the Greater Manchester area and had not achieved reaching the GIC's doors.

Indigo is a partnership between gtd healthcare, a not-for-profit organisation with an established presence of primary care and urgent care services in the north-west of England, together with the LGBT Foundation, a national charity delivering services, advice and information for lesbian gay, bisexual and trans communities.

In December of 2020, Vicky was contacted by Indigo and was told she could opt out of the GIC Sheffield queue and join the Indigo pilot. Quite naturally, she jumped at the chance of being seen quicker. In fact, Vicky was quite desperate for care, so had previously joined GenderGP's private services, which, when getting the offer from Indigo - she understandably withdrew from.

Vicky registered with Indigo on the 22nd of January 2021, joining 700 people in the pilot, and within one week she was assigned a personal "Navigator" to accompany her through her Indigo trans journey.

She had an assessment for voice coaching on the 15th of February - then had her first medical interaction with a specialist doctor on the 2nd of March - and again on the 2nd of April with her GenderGP hormone schedule agreed by all parties. Vicky has nothing but praise for GenderGP – who saw her through those dark days, but that’s a story for another day.

Her next Indigo appointment was the 11th of May to discuss surgery - with a final sign off scheduled for May 27th.

Many trans people will be amazed how quickly Vicky has been seen, and other than having final surgery is pretty much “sorted." Indeed, Vicky is very embarrassed how quickly things have evolved. But when new services are trialled, someone has to go first, and of course, she was in that queue at Sheffield for two long years.

Talking to Vicky, I was told other "useful information", though.

I learnt that if you have a specialised need, you can opt for a GP out of your usual catchment area if the GP in question specialises in certain types of medicine, such as gender incongruence (also known as gender dysphoria). This may be a shortcut for some trans folks if you know of a GP who specialises within a reasonable travelling distance of your home.

Quite naturally, Vicky is very happy, and I am delighted for her.

She does loads for the trans community with her interesting podcasts and deserves to have her problems resolved and to be able to live her life as a woman.

Vicky is also getting blood tests every three months - one reason why not to self-med, please - and if you do TELL your GP and all other medical services - it could save your life. Again, if you are self-medicating your GP is pretty much obliged to prescribe hormones and do blood tests! If they fail REPORT THEM and consider finding a friendly GP with a special interest in trans folks health.

Blood tests and being honest to medics is important.

Indeed, I know of a trans patient who died because she failed to tell medics she was self-medicating.

And the next step? - well, for trans people everywhere, we need to shout from the rooftops that Indigo should NOT be a pilot scheme. Based on Vicky's experience, it should be rolled out across the UK with all possible haste.

Traditional Gender Identity Clinics? - put them in the bin!

While this looks like a really positive step forwards for trans healthcare in the UK, and I'm immensely pleased that Vicky has had such a positive experience - as a community we need to manage our expectations. And there's a few things to consider.
The pilot schemes are either run or have heavy involvement by organisations already within the LGBT community, which offers some security and confidence that we will be treated with respect and understanding - something sorely lacking in the GICs.
However, there is no guarantee that this will remain the case when the pilots end, nor for new services that may be added.
There is currently no published plan on what is going to happen to the pilot clinics at the end of the two year trial. Will the remain localised clinics, convert to full fledged GICs, or someththing else? Would this affect their scope of operations?
My review of the new 2019 assessment protocols shows that the intent may be for them to remain, and expand this model - but so far there's no actual commitment on this. And while there are some good, positive changes in many areas, as well as some huge flaws - on paper the actual assessment process is only marginally different when compared to the 2013 protocols.
This suggests that the pilot schemes may have been given significant latitude in how the protocols were actually interpreted and implemented, and as such may not be an accurate reflection of the future state of trans healthcare in the UK.
If protocols are left open to interpretation to this extent, then other clinics or those that replace the pilot schemes can just as easily revert back to, or start with the abusive diagnostic and assessment practices currently employed.
A brief chat with Vicky also resulted in the following conclusion - these pilots have no effect at all on any wait for seeing a surgeon for GCS after getting both the sign-offs completed.
With more people coming through the process in a timely fashion, this may actually cause a new bottleneck at the point of surgery - and surgical referrals need to be refreshed after 12 months. There's no indication this scenario has been considered in the protocols nor any materials the NHS have published.
Much will hinge on how the NHS assess the success of the pilot clinics in deciding how assessments are handled going forwards - and we know they are highly resistant to change in this area.

Authored by Steph & Footnotes from Claire