13th August. Weight Gain and Side Effects of HRT

Oh my waist - and I keep getting substitute patches 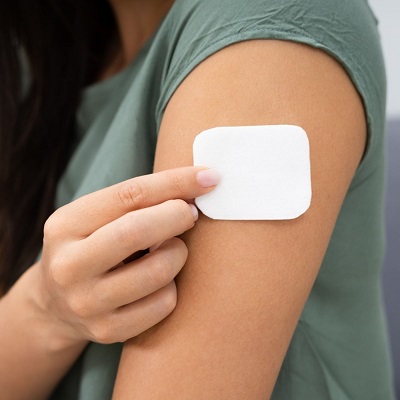 One of the biggest problems I have had being on HRT has been the weight gain. Looking at the NHS and other websites they say weight gain is not associated with HRT and that any increase in weight is down to "slowing down" as we get older. Now I know HRT has various effects on cis women and trans women alike, and in many regards, I have been fortunate.

I guess because I started HRT on a very low dose and subsequently built up over a long period to a high dose my body never really went into "shock". Over time a feminine figure has developed and yes it is an hourglass figure - but not by massive amounts.

I never experienced terrible "hot flushes", or indeed pain as my small boobs (now between an A & B cup) started to take shape - so in this respect again I have been lucky.  I did get genital pain for a spell, but once I had surgery that disappeared. My biggest plus for HRT is that some fat has transferred to my bum (butt), and my skin is mega smooth.

And as a trans woman, I will be on it for the residue of my life as I need it not just for my mental well being (and to be vain - my figure) but also so to keep my bone density healthy. The risks to me taking HRT is that I could, over time, damage my liver & kidneys, but with six-monthly monitoring, my endocrinologist does keep an eye on it. For these reasons, self-administering HRT is not a clever idea. Nor believe that dosages are the same for all - it is not, we all react differently to HRT.

I wear HRT patches and was prescribed Estradot which are great because they are small in physical size and for me, they stick well. Sadly though Estradot has been hard to get as in the UK (and probably other countries as well) as there has been an acute HRT shortage. For health reasons - mainly my age- I can only wear patches so during the shortage my doctor has issued substitutes.

I was first given FemSeven, but I experienced a massive allergic reaction to them, making my skin bleed in just a few days. This is surprising as I dont have particularly sensitive skin so am unsure what glue the manufactures of FemSeven use, but these patches most certainly didn't work for me.

As a replacement to FemSevern, I was prescribed Evorel, which were fine on my skin, but the pharmacy could only get Evorel 50, meaning I had to wear two patches. The difficulty with Evorel is the size of them. Wearing one is fine but wearing two and continually having to change skin location becomes hard work, but at least my skin was ok with them.

But then disaster - Evorel went into short supply, meaning another change this time to Progynova 100. The good feature about Progynova 100 for me personally was that it meant wearing one patch as opposed to two. Another benefit was Progynova lasted for a week - meaning just one patch change in a week, not two - as was the case with Evorel.

Except that Progynova dont stick for a week, well not on me anyway. After a couple of workouts and showers, off they pop and although they say you can stick them back on the fact is they often come off again. My HRT patch tour is still ongoing of course - today I was given Evorel 100, and the patch looks enormous.

Time will tell how these go but I really crave for my Estradot 100!

Another issue for trans women using HRT patches is that I am yet to find any instructions at all from the manufacturers in relation to those of us who are trans. Fair enough HRT patches are used mainly by cis women but surely amongst the mountain of information supplied by the manufacturers they could at least make an effort to recognise trans women's use?

I would also argue that by doing that it would increase awareness to cis women of trans women's needs and hopefully help establish (to some extent at least) some equality for trans women. A small point I know - but a valid one.

So just why the fight with my weight?

And the answer is I dont know. I am paranoid about keeping my existing wardrobe owning some dresses in particular that I just adore.

If they did not fit me, I would be beyond gutted.

The issue is my waist. Boobs though small are pronounced and that's all I wanted. I also knew that my boobs were likely to be one cup lower than my mums, and that is precisely how it is. Hips are spot on 41 inches (104 cm), and they are perfect.

I do watch what I eat. I rarely drink alcohol and exercise - walking at least 3 miles every single day.

Portion sizes are generally modest and to counter hunger I drink loads of water.

But my weight just keeps creeping up.

So I still blame HRT!